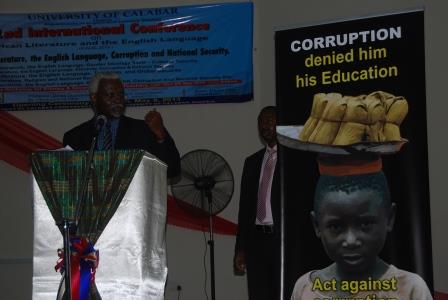 “Save Your Love For Lecturer Till After Graduation”, ICPC Boss Tells UNICAL Students

The Chairman of the Independent Corrupt Practices and Other Related Offences Commission (ICPC), Mr. Ekpo Nta, has advised the students and staff of universities in the country to eschew corruption in all its ramifications or be ready to face the wrath of the Commission. Mr. Nta gave this advice in an address he presented at the 22nd Annual International Conference on African Literature and English Language at the University of Calabar.

The ICPC Chairman said following the system study the Commission conducted in collaboration with the National Universities Commission (NUC) in several Nigerian universities, it became obvious that Nigerian universities are plagued by various forms of corruption which include: sexual harassment of both staff and students; examination malpractice; falsification of official documents like transcripts; nepotism; plagiarism which may attract civil and criminal sanctions; contract manipulation, etc

Mr. Nta condemned the high rate of sexual harassment of both staff and students and warned that the excuse of ‘matured consent’ would no longer be acceptable in the new legal framework being crafted to address the problem. According to him, under no circumstances should a student be romantically involved with a lecturer. He said, “If you are in love with your lecturer, it’s better for you to save it till after your graduation, because mutual matured consent will no longer be tenable as defence for immoral behavior”. The ICPC Chairman also said that the universities would now be required to report to the ICPC students that they have punished for examination malpractice so that their records will be included in the Commission’s data base of offenders. He further revealed that the ICPC was investigating quite a number of university officials and students who had allegedly engaged in various corrupt acts and would soon be charged to court if they were found culpable. Mr. Nta told the audience that not reporting corruption is an offence punishable under the ICPC law and said that the ICPC has set up toll-free telephone lines to enable members of the public report acts of corruption to the Commission at no cost to themselves.

Speaking on the theme of the conference which was, “Corruption and National Security”, the ICPC boss commended the organizers for the aptness of the theme. In his words:“This year’s theme, which focuses on corruption and National Security, could not have come at a better time when our country, alongside some other nations, is facing severe security threats arising from violent challenges to state authority and which are fueled by international terrorists and criminal cartels.” He added that,” The symbiotic relationship between corruption and national security can only lead to an unhappy marriage…..It puts under threat the territorial integrity of a nation if corrupt officials do not ensure compliance with immigration, customs and excise laws and requirements.”

The Vice Chancellor of the university, Prof. James Epoke, in his speech, told participants at the workshop that corruption was “in the mind” and that people could choose not to be corrupt. He held up the ICPC Chairman as a symbol of integrity and declared: “If the ICPC chairman who is one of us can be a man of integrity, we also can choose to be upright.”

The conference attracted literary writers from far and near including Elechi Amadi, the famous author of The Concubine and The Great Ponds.