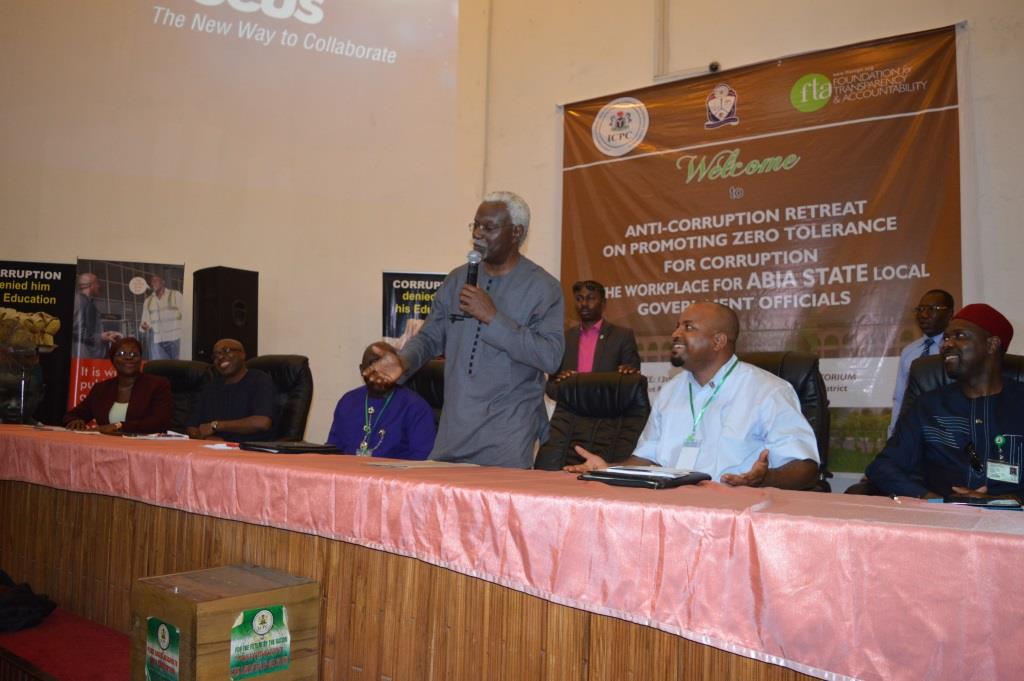 The Anti-Corruption Academy of Nigeria (ACAN), the training arm of the Independent Corrupt Practices and Other Related Offences Commission (ICPC), recently organized a two-day workshop on Anti-Corruption, Ethics and Integrity for members of the Abia State Local Government Councils at the Commission’s Headquarters in Abuja.

The main objective of the workshop was to promote zero tolerance for corruption in the workplace for the Local Government officials.

Declaring the workshop open, the Chairman ICPC, Mr. Ekpo Nta, said that the essence of the workshop was to showcase the new anti-corruption paradigm of ICPC. According to him, “corruption like cancer adapts itself to the host and kills off healthy cells as it has to feed on them for survival” and therefore needed to be surgically removed through holistic strategies.

Nta added that early detection and prevention helps to prevent the spread of corruption, and therefore commended the step taken by the Abia State Government to curb corruption at the local government level.

Mr. Nta noted that the local government is the closest tier of government to the people, so ICPC and Abia State must join hands together to work towards prevention of corruption.

He said the training was organized to help show the local government council members the right steps to take by exposing the participants to various anti-corruption tools, such as principles of good governance, transparency and accountability; proper procurement processes; and how to handle corrupt demands; etc.

Mr. Nta added that ICPC would want to see all the participants go home with clean records at the end of their tenure. According to him, “The best way to fight corruption or corrupt demand is by good governance and the provision of basic infrastructure for the people. With these the stress of ‘stomach infrastructure’ will be reduced.”

The Governor of Abia State, Dr Okezie Ikpeazu, who was represented by the Senior Special Assistant on Public Communication, Mr. Sam Hart, reaffirmed the commitment of Abia State to backing the anti-corruption fight, stating that corruption was common with officials at the local government level, which was why the state sent all its Chairmen, Deputy Chairmen, Heads of Service and Treasurers to undergo such training at ICPC.

He expressed the hope that as they leave office they would not have cause to be called back to ICPC as suspects.

Mr. Sam urged the participants to take the training seriously for it would help the fight against corruption and used the opportunity to thank ICPC for keeping to its word’s in promoting as well as using “Made in Aba” products as training materials.

In his remark, ACAN Provost, Professor Sola Akinrinade, called on the participants to contribute their own quota to the process of tackling the problem of corruption at the level of government closest to the people.