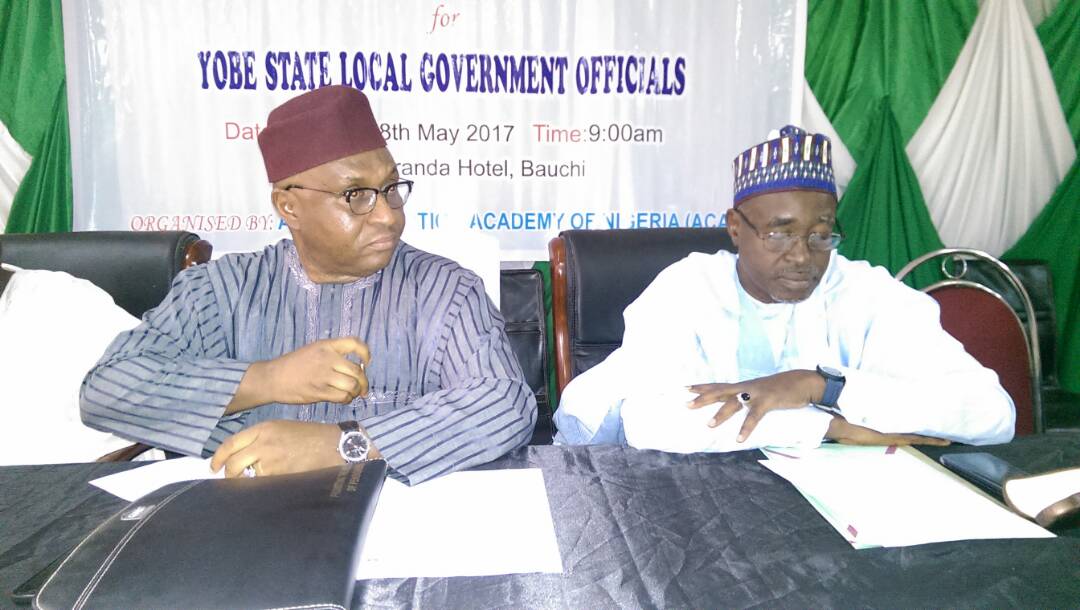 The Chairman of the Independent Corrupt Practices and Other Related Offences Commission (ICPC), Mr. Ekpo Nta, stated this recently while declaring open a one-day training tagged: “Anti-Corruption, Ethics and Integrity,” organized for Yobe State Local Government officials in Bauchi by the Anti-Corruption Academy of Nigeria (ACAN), the training and research arm of ICPC.

The ICPC Chairman who was represented at the opening ceremony of the event by the Secretary to the Commission, Dr. Elvis Oglafa, noted that corruption remained a big problem bedeviling the nation because, among other factors, many local government officials lacked the requisite knowledge of the ethics that would drive a corruption-free administration of local councils in the country.

He therefore noted that training and capacity-building sessions for the workers were necessary for ICPC to entrench anti-corruption ethos in the local government system.

Mr. Nta said such sessions would also provide an opportunity for local government workers and ICPC to discuss issues bordering on anti-corruption.

He drew attention to the importance of transparency and accountability in the operations of the third tier of government and the danger of allowing corruption to thrive at that level.

“You must understand that you are carrying a big responsibility, therefore, you should not allow loopholes in the system. You must also understand that local government councils are critical, because if you fail, the entire communities will fail, the state will fail and the nation at large will fail,” the ICPC Chairman warned.

In a paper titled: “Leadership and the Fight against Corruption at the Local Government Level,” by Dr. Elvis Oglafa, participants were charged to always have it at the back of their minds that the only reason they were in leadership positions in the various local government councils of Yobe State was for them to bring about meaningful development and improve on the welfare of those at the grassroots.

In another paper presentation titled: “Fostering Ethics and Integrity in Local Government,”Mr. Abdul Ahmed of ACAN stated that expected ethical values for local government officials include loyalty, punctuality, discipline, professionalism, honesty, integrity among others. He called on participants to develop a firm moral fibre that can resist pressure to do wrong and always abide by the Public Service Rules and Financial Regulations in the management of government finances.

In a similar presentation titled: “Types, Risks and Consequences of Corruption at Local Government Level,” ICPC’s Head of Administration, Mr. Gad Bako, identified some risks associated with corruption in the local government to include inflation of prices of items, ghost-workers syndrome, over-estimation of costs of projects,  etc. He called on the participants to shun such sharp practices and make integrity their watchword.

Another presentation featured “The Corrupt Practices and Other Related Offences Act, 2000 at the Local Government Level”. Its presenter Mr. Abubakar Jibrin of the Bauchi office of ICPC highlighted the various provisions in the Act that local government officials were prone to violating.

Earlier in his welcome address, ICPC North-East Zonal Commissioner, Alhaji Sule Yahaya, told participants that corruption in any form was unacceptable, saying that corruption can only be minimized if public officials at the grassroots imbibe the culture of integrity in all their dealings.