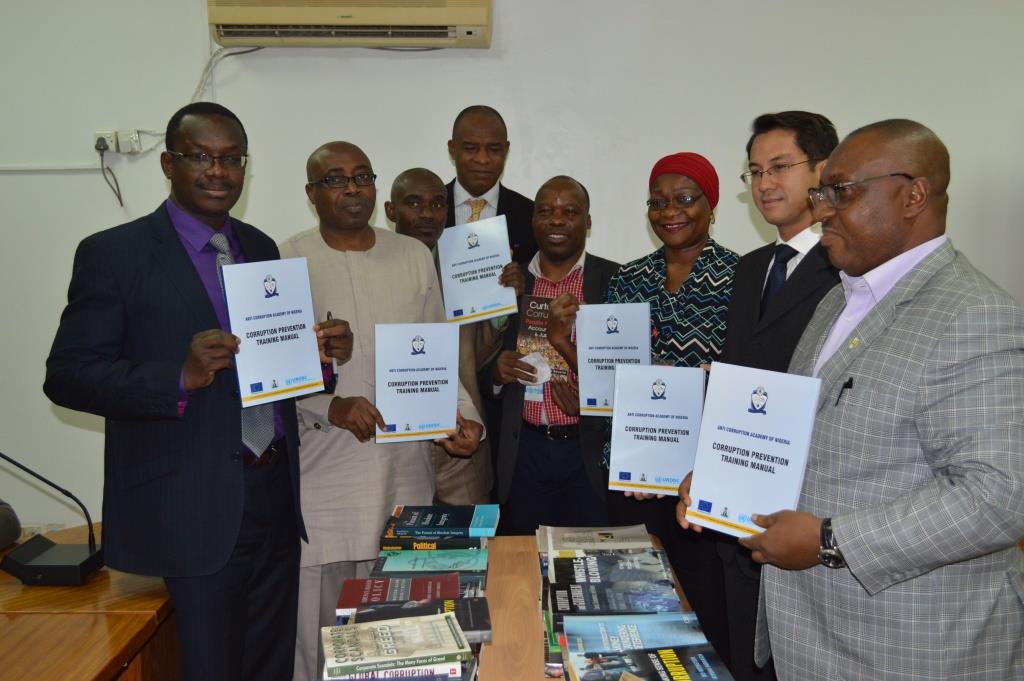 The Anti-Corruption Academy of Nigeria, (ACAN) the training and research arm of Independent Corrupt Practices and Other Related Offences Commission (ICPC) is the beneficiary of invaluable anti-corruption training materials donated by the United Nations Office on Drugs and Crime (UNODC).

The materials which consist of book copies of a survey on corruption carried out in Nigeria by UNODC in conjunction with the National Bureau of Statistics; hundreds of copies of anti-corruption literature; and corruption-prevention training manuals were donated to the Academy during a brief ceremony at the ICPC headquarters in Abuja recently.

Making the presentation of the materials, the Project Coordinator of UNODC Mr. Polleak Ok Serei, said the items represent assistance from the European Union as support to the government of Nigeria under the project “Support to anti-corruption in Nigeria” which is being implemented by the UNODC.

Mr. Polleak, added that he was certain that the materials would help the Commission carry out its statutory duties of tackling corruption in Nigeria more effectively and efficiently.

He praised the efforts of the Commission saying: “We at UNODC are not unaware of the profound initiatives of ICPC aimed at preventing corruption. We commend you for this because we are convinced that sustainable anti-corruption prevention is the way to go if Nigeria is to free itself from the ravages of corruption.”

In his response while receiving the gifts, the Chairman of the Commission Mr. Ekpo Nta who was represented by the Secretary to the Commission, Dr. Elvis Oglafa, said that the Commission was humbled by the recognition of its achievements in the area of anti-corruption. He vowed that such commendations can only serve to spur it to greater achievements, adding that the training materials received would be utilized to the maximum for an improved campaign to prevent corruption in the country.

Mr. Nta noted that UNODC had been a worthy partner to ICPC, and described the donation of the books as “giving ICPC a competitive advantage for effective knowledge management in the fight against corruption in Nigeria.”

It may be recalled that ICPC has embarked on several corruption prevention strategies including the corruption risk assessment of Nigeria’s Ports and Aviation sectors, e-governance platforms; as well as system studies of  some universities, Ministries, Department and Agencies, etc.