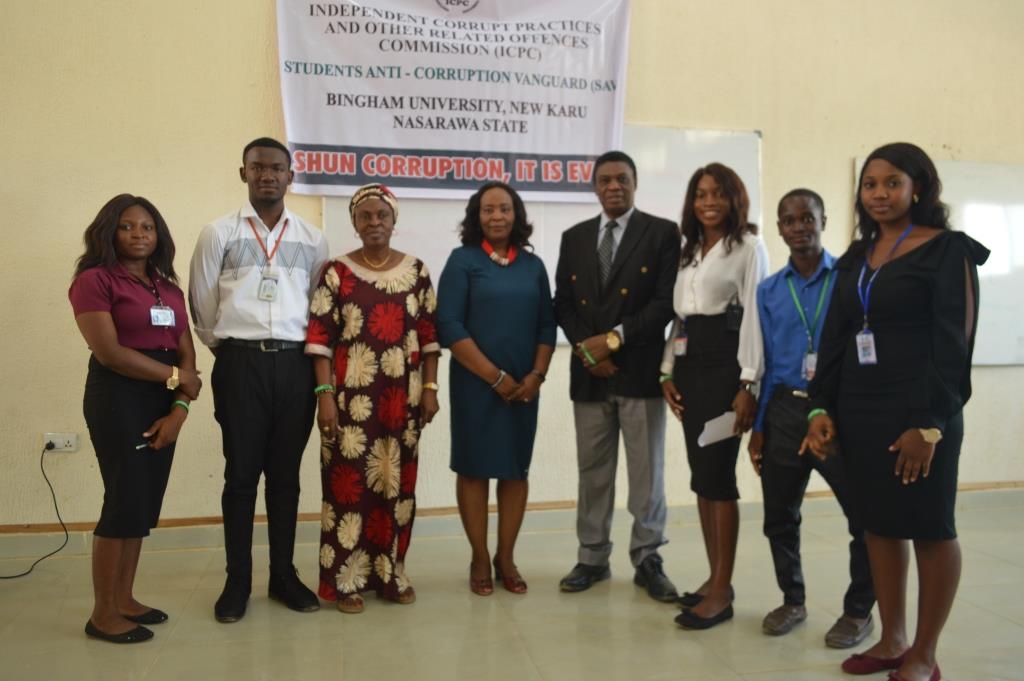 The Independent Corrupt Practices and Other Related Offences Commission (ICPC), has sworn in new officials and members of the Students Anti-Corruption Vanguard (SAV) of Bingham University (BU).

The event which comes on the heels of increasing popular demand for measures that are stakeholders-inclusive against the spate of corruption in higher institutions in Nigeria, took place at the permanent site of BU, located in Karu, along Abuja – Keffi expressway.

Speaking during a brief courtesy call on the Vice-Chancellor (VC) before the swearing-in ceremony, ICPC Chairman, Prof. Bolaji Owasanoye, who was represented by Mrs. Azuka Ogugua of the Education Department, had informed the VC of the philosophy behind SAVs in higher institutions in Nigeria.

According to Owasanoye: “the devastating effects of non-monetary aspects of corruption are equally of interest to the Commission, besides the financial aspects of corruption. For instance, the plethora of unreported ‘sex-for-grades’ issues and other unwholesome practices, which often-times are largely discussed in hush voices on campuses of higher institutions throughout the country, calls for all-inclusive measures to address such ills.”

In his response, the Vice-Chancellor, Prof. W. B. Qurix, expressed delight at how ICPC carries privately-owned institutions, including universities, along in its anti-corruption activities.

In his words: “We feel highly honoured and privileged that BU has been considered by ICPC for its campaign against corruption. It may interest you to know that as a faith-based institution, integrity is at the centre of our core values, mission and vision.

‘We are therefore glad that ICPC has provided us with the right opportunity to key into the anti-corruption effort of the Commission, which will certainly enable us showcase our level of integrity among Nigerian universities”, he concluded.

At the ceremony proper, in a paper presentation titled: Corruption: the Dream Killer, participants were enlightened on the several ills of corruption and its daunting consequences on the future of Nigerian youths.

Participants afterward sought to know how the Commission could protect students who reported cases of sexual harassment. It was clarified that ICPC’s enabling law provides for the protection of informants and information on all matters of corruption and other related offences.

Over 300 new members of the university SAV were sworn in, while the oath of office was administered on 5 officials, which had Ms. Joy Omobo and Ms. Julia Musa Kutwa, as the President and the Secretary-General respectively.

Also in attendance at the event, were Dr. Mrs. Idoko, the SAV Patron and the Deputy Vice-Chancellor, Prof. Alexander Adeleye, who represented the VC.

SAV is one of the successful interventions and youth-friendly initiatives of ICPC, which has been specially tailored to provide a robust opportunity for students of tertiary institutions to initiate and take ownership of measures aimed at curbing corruption within their institution.