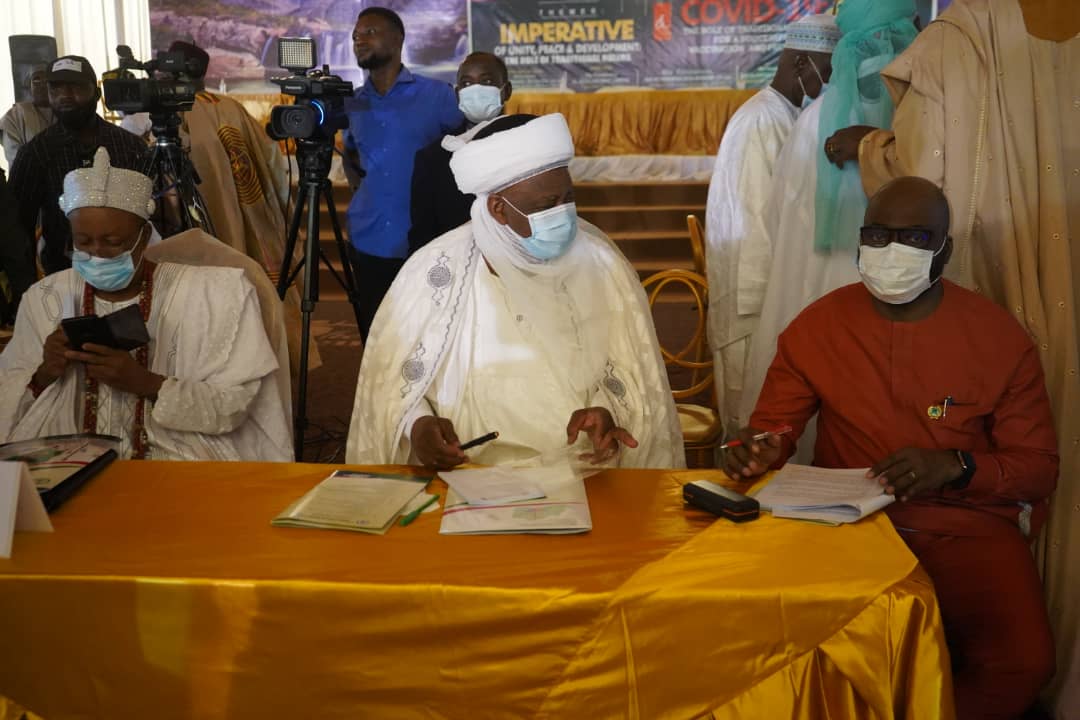 “Whatever you Support, Succeeds” – Sultan of Sokoto Charges Traditional Rulers on the National Ethics and Integrity Policy

The Sultan of Sokoto and Chairman of the National Council of Traditional Rulers of Nigeria (NCTRN), Alhaji Dr. Mohammed Sa’ad Abubakar, CFR, mni, has charged traditional rulers nationwide to support the implementation of the recently approved and launched National Ethics and Integrity Policy, a brainchild of the Independent Corrupt Practices and Other Related Offences Commission (ICPC), the Office of the Secretary to the Government of the Federation (OSGF) and the National Orientation Agency (NOA).

The Sultan made this statement during the Plenary session of the 12th General Assembly of NCTRN which took place on Monday in Kano, after a presentation of the Policy to the Council by the ICPC Chairman, Prof. Bolaji Owasanoye, SAN.

According to the Sultan, traditional rulers have a key role to play in governance including the promotion of government policies. He cited the example of the polio vaccine and noted that the support of traditional rulers in the distribution of the vaccine led to the successful eradication of polio from the country.

“Whatever you support, succeeds” the Sultan stated.

He therefore called on the royal fathers to put their weight solidly behind ICPC and NOA, to ensure a successful implementation of the Policy.

Furthermore, the Sultan urged ICPC and its partners to collaborate with relevant stakeholders such as the National Institute of Policy and Strategic Studies (NIPSS), who are experts on policy formulation and implementation, as well as the media to give the work of the Commission more publicity. He charged ICPC to take the message of the core values of the policy to every state and local government of the Federation.

The Chairman of ICPC, Prof. Bolaji Owasanoye, had requested for the support and collaboration of the traditional rulers in the implementation of the National Ethics and Integrity Policy, which he said would restore the lost values of honesty and integrity Nigeria was known for.

He further explained the policy has been simplified and translated into pidgin English, Igbo, Hausa and Yoruba to enhance communication and understanding about its contents.

Giving a background to the policy and its objectives, the ICPC boss dwelt on the implementation of the policy using a National Action Plan and Consequence Management Template, both of which are meant to serve as guidelines on how they can promote the values towards attaining a better society.

He explained that beyond prescribed penal and administrative sanctions contained in the policy, traditional rulers could enforce social sanctions of denouncing conduct not in alignment with acceptable societal values by naming and shaming defaulters, pointing out that “every violation of a cherished value should be seen as a violation of the law”.

Explaining further, the Director General, National Orientation Agency (NOA), Dr. Garba Abari said the central focus of the policy were the 7 core values it contained, adding that as first-class traditional rulers, their support and cooperation would help in making the public own and practice those core values of Human Dignity, Voice and Participation, Patriotism, Personal Responsibility, Integrity, National Unity and Professionalism.

Other royal fathers who spoke at the occasion commended the efforts of ICPC, NOA and OSGF, saying that the Policy could bring a long-term solution to the problems of corruption in Nigeria.

PrevPreviousICPC urges Stakeholders in the North-West Zone to embrace and own the National Ethics and Integrity Policy
NextCorruption: ICPC secures Interim Forfeiture of N316,748 Next