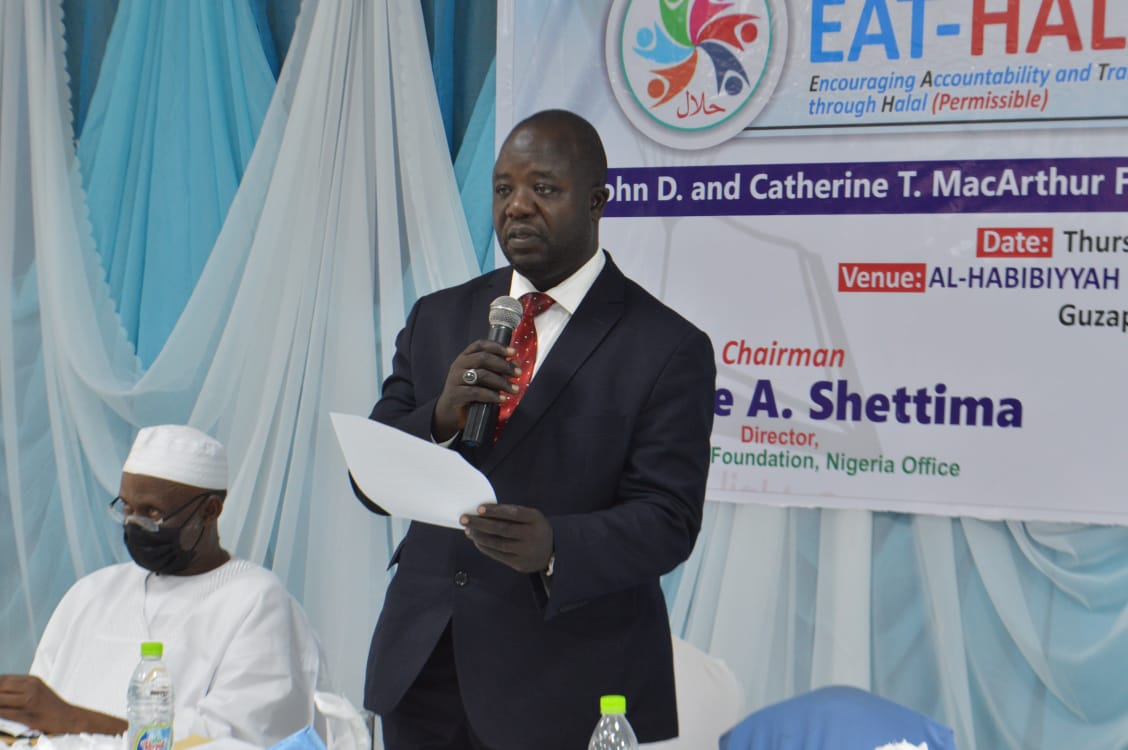 The Chairman of the Independent Corrupt Practices and Other Related Offences Commission (ICPC), Professor Bolaji Owasanoye, SAN, has called on Nigerians to own the National Ethics and Integrity Policy (NEIP), and propagate it as a religious obligation.

Professor Owasanoye made the call through the Commission’s Assistant Commissioner, Hassan Salihu,during the launch of a new project “Eat Halal” andpublic presentation of two book titled “Sermon Guide for Imams” by the Just Foundation, a branch of an NGO, Al-Habibiyyah Islamic Society in Abuja recently.

The ICPC Chairman noted that the Commission was established in 2000, as Nigeria’s principal anti-corruption agency that uses lawful prevention and enforcement measures to fight corruption and other related offences.

He said that ICPC was honoured to be associated with the “Eat-Halal” Project, which signifies doing the righteous deeds within the confines of Islamic teachings to earn a living and not to eat the forbidden.

Speaking further, the Chairman of ICPC told the gathering that it is important to note that anti-corruption crusade is obedience to Almighty Allah’s instruction of enjoining the good and restraining the bad.

He bewailed the fact that deficiencies of national ethical standards and lack of integrity have continued to make sustainable development an unattainable ambition for Nigeria. “The absence of these positive national values undermines the prospect for national development through large scale corrupt practices and poor adherence to ethical standards” he said.

The ICPC Chairman further noted that the necessity of putting moral values into practice in Nigeria has compelled ICPC in policymaking to address unethical behaviours and the infamy it has brought against the country and its citizenry.

The Chairman identified some of the core values of the national ethics and integrity policy included: human dignity, voice and participation, patriotism, personal responsibility, integrity, national unity and professionalism.

“I request you to please own this National Ethics and Integrity Policy and propagate it as religious obligation, because it is line with Islamic moral values”, he said.

In a goodwill message, Director, MacArthur Foundation, Nigeria Office, Dr. Kole A. Shettima, stated that faith leaders have a role to play in terms of moulding and modelling of a good society in the country.

He added that the MacArthur Foundation supported Al-Habibiyyah in the same manner that it supports other faiths because it believes that faith has a role to play in the lives of individuals as values learned willalways reflect in their dealings with one another.  He added that the books being launched would serve as a useful guide to the Imams and the work that they do.

In another goodwill message, the Director-General (DG) of the National Directorate of Employment (NDE), Mallam Abubakar Nuhu Fikpo, who was represented by the Director, Human Resource Management of NDE, Mrs. Shafaru Awulat Adeola noted that the launching of a new project and the public presentation of the books were quite supportive of a collective quest for a better society and balanced national development.

“Eat-Halal” is all about support to the Federal Government efforts in fighting corruption and promoting piety among the citizens of this country”, she added.

Earlier in his remarks, the Executive Director of the Just Foundation of Al-Habibiyyah, Imam Fuad Adeyemi said that the project was a continuation of previous project “EAT-Fin” Encouraging Accountability and Transparency through Faith-based Intervention), supported by MacArthur Foundation which was launched in 2018.

Adeyemi noted that the project empowered and educated Imams and other Islamic clerics with the right information on the dangers of corruption and how to speak against the menace using their divine mandate and influence on their congregants.

Speaking further, the Imam told the gathering that one of the impacts of the programme was a scenario in Kebbi where one of the participants returned to a customer who had been buying grains from her over the years, but whom she had been serving incomplete measure and asked for forgiveness for shortchanging him many years ago.

“These and many more are the reason why the project is continuing with the support of MacArthur Foundation”, he explained.