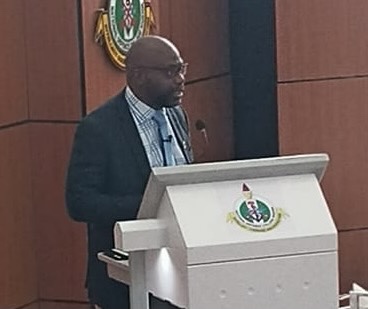 The Chairman, Independent Corrupt Practices and Other Related Offences Commission (ICPC) Professor Bolaji Owasanoye, SAN, has stated that “Corruption impacts development, peace and security” of a nation in multiple ways.

Professor Owasanoye, SAN, made the remark recently in Abuja while speaking as the Guest Lecturer to Course 30 Participants of National Defence College (NDC) Nigeria, on the topic: Whole of Society Approach in the Fight Against Corruption and Human Security in Nigeria.

The Chairman stated that corruption weakened the state and eroded its capacity to provide the requisite training and equipment for security and paramilitary agencies such as the police, military, immigration, customs civil defense and neighbourhood watches.

According to him, ‘Bad governance, corruption and the collapse of the rule of law lead to insecurity.’

Speaking on how pervasive corruption in defense spending can impact a county’s peace and security, the ICPC boss warned of how a single transaction of diversion of huge sums could have immediate impact that may become irreversible or more difficulty and costly to reverse, while petty diversion of budget or misallocation of resources may not immediately make impact but will inevitably impact medium to long term.

He then advocated for strong systems and the deployment of technology as a recipe for fighting corruption effectively.

In his remark after the lecture, NDC Commandant, Rear Admiral O.B. Daji, also lent his voice to the fact that corruption was an existential threat to national security because of its ability to undermine the institutions of the state and erode public trust.

The Commandant therefore reminded the Course 30 Participants that as strategic leaders, corruption and insecurity should be of concern to them otherwise they would continue to live with the consequences.