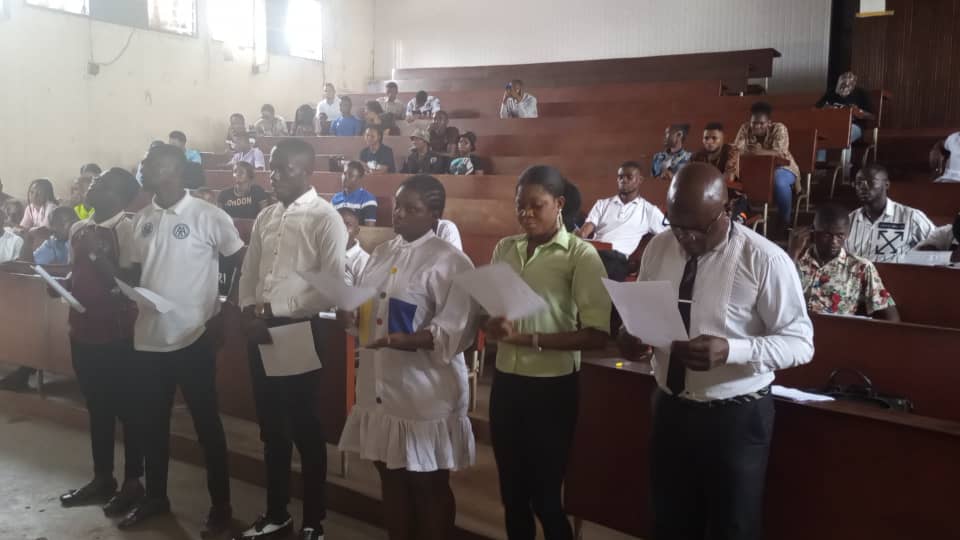 The Independent Corrupt Practices and Other Related Offences Commission (ICPC), Enugu State office, has inaugurated the Students Anti-Corruption Vanguard (SAV) of the Institute of Management and Technology (IMT), Enugu at the Institution’s Auditorium.

In his speech, the Resident Anti-Corruption Commissioner, ICPC Enugu State Office, Amedu Sule, Esq, thanked the Board, management and staff of the school for their cooperation and for making the launching of the vanguard a success by their support for the project.

Amedu, who was represented at the occasion by the Head, PE & E Unit of the ICPC Enugu State Office, Mr. Suleiman Achile, also commended the commitment of the students to the launching of the Vanguard, which he said is worthy of emulation by other tertiary institutions in the state.

The RAC stressed that ICPC recognized the youths as future leaders and that the best way to secure their future was to imbibe the culture of integrity, transparency and accountability in them at their formative age.

He explained that the Commission’s interest in working with the youths was hinged on the African Youth Charter and the ICPC Act, 2000.

He mentioned some of the youth programmes of the ICPC, especially in the educational sector to include formation of Student’s Anti-Corruption Vanguard (SAV) in tertiary institutions, Anti-Corruption Clubs in Secondary Schools, infusion of the National Values Curriculum into School’s Curriculum at different levels of education, outreach to National Youth Service Corps orientation camps, amongst others.

The RAC therefore implored the students to bring to bear serious commitment into the fight against corruption as he said, ICPC alone cannot cope with the task of institutionalizing integrity, transparency and accountability in the country. He urged them to complement the efforts of the Commission by educating fellow students on the ills of corruption and participating actively in social auditing, whistle blowing and mobilizing fellow students to stand against corruption.

Earlier in a welcome address, the Rector of the Institution, Prof. Austin Nweze welcomed the officials of the ICPC to the launching of the vanguard.

The Rector, who was represented by the Deputy Rector of the school, Engr. Udeh Sunday, acknowledged that corruption exists in every human endeavour and maintained that the essence of the programme was for the school to join in the fight against corruption using the Vanguard as a platform.

He further stressed that education is an important sector for national development saying that the standard of our education can only be improved through the elimination of examination malpractices.

He promised that the school authority would always support and collaborate with the vanguard to take the fight against corruption in all its ramifications to the next level in the institution.

Prof. Nweze condemned cultism and all other negative social vices prevalent among the students and added that any student found to be member of any secret cult in the institution would be handed over to the ICPC. He urged the vanguard members to carry out their duties with all the seriousness it deserves and to operate within the ambit of the operational guidelines of the vanguard, as well as to act as a role model within and outside the school.

The oath of membership and inauguration of the members of the Student’s Anti-Corruption Vanguard was conducted by Barr. Joseph Ochigbo, of the Legal unit of ICPC.

Officials of the inaugurated Vanguards were Isife Jude Jacob – President, Yoke Blessing – Vice President; Ogbodo Emmanuel – Secretary General. Others are Agu Chidinma – Treasurer/Financial Secretary; Nmadukwem Dominic – Publicity Secretary and Obinna Sunday – Liaison Officer respectively.   In an acceptance speech, the President of the Vanguard, Jude Jacob thanked the ICPC for the trust and confidence reposed on them to carry out the challenging but very interesting task of fighting corruption in the school and promised that they would carry out their job diligently without fear or favour.