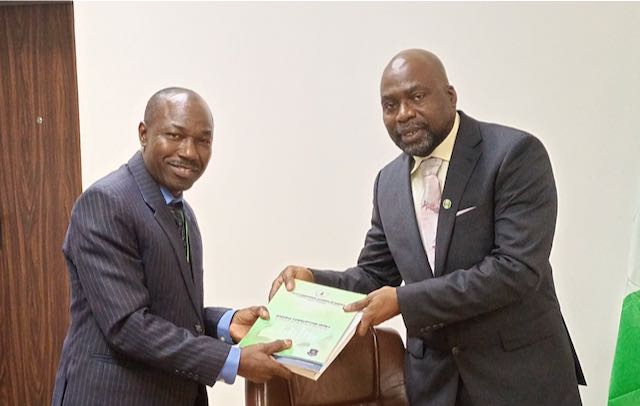 ICPC to Continue Valuable Relationship with Punch, Other Media

The Chairman of the Independent Corrupt Practices and Other Related Offences Commission (ICPC), Professor Bolaji Owasanoye (SAN), has stated that the Commission will continue to engage productively with the Punch Newspaper and other media houses in the fight against corruption.

Professor Owasanoye made this declaration during a courtesy visit to the Commission by officials of the Punch Newspapers recently.

The ICPC boss acknowledged the critical role of the media in curbing corruption but insisted that the media must remain responsible in discharging its duty. He maintained that media houses must find effective ways to act as checks and balances while retaining economic solvency.

The Chairman noted that quite a few media houses were guilty of click-baiting in order to increase their audience and drive traffic, but Punch Newspapers, however, has remained a largely credible and reliable source of information.

Discussing the Commission’s press relations strategies, the ICPC boss explained that interactions with the press are limited to official releases due to the sensitive nature of its duties. While the press is established to disseminate information, the mismanagement of information, especially in ongoing cases, could be pre-emptive as people involved may be forewarned and take measures to conceal incriminating evidence that may be crucial to a case.

He added that the Commission would remain fair and transparent in its dealings with the press and not be seen to favour one above the other.

Professor Bolaji commended the team for their resilience through the current economic climate and expressed the hope that the relationship between the Commission and the newspaper remained mutually beneficial.

The visiting team led by Mr. Ademola Oni, who is the head of Content Division at the newspaper, expressed their gratitude to the Commission and stated that amongst other things, Punch was committed to improving its relationship with the ICPC while ensuring they function appropriately to limit corruption.
Mr. Oni further explained that the visit was to strengthen the existing structures and obtain feedback from the Commission to improve their service delivery. He noted that while the newspaper may be seen as confrontational by some people, the objective remains to keep people on their toes in line with the legacy of the founding fathers of the newspaper.

The meeting concluded with an exchange of publication materials as well as a group photograph with the Chairman and the Punch team.