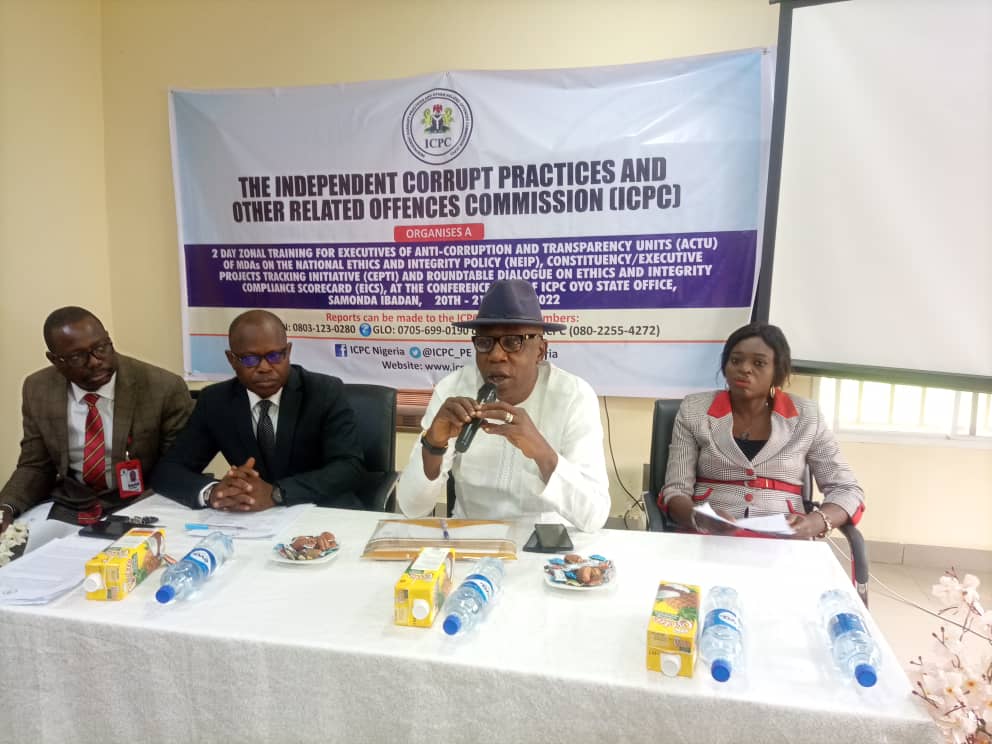 The Independent Corrupt Practices and Other Related Offences Commission (ICPC) has set out to educate the Anti-Corruption and Transparency Units (ACTUs) of Ministries, Departments and Agencies (MDAs) on the National Ethics and Integrity Policy (NEIP) and other major initiatives of the Commission with a view to strengthening them to prevent corruption in the public service.

The ICPC Chairman, Professor Bolaji Owasanoye, SAN, made this known recently in Ibadan, Oyo State during a two-day training for executives of ACTUs in the South-West geo-political zone.

The Chairman, who was represented by an ICPC Board Member, AIG Olugbenga Adeyanju (Rtd), stated that the implementation of NEIP’s seven core values of Human dignity, Voice and Participation, Patriotism, Personal Responsibility, Integrity, National Unity and Professionalism was one of the strategies which would contribute towards promoting accountability across the public service system.

The ICPC Chairman stressed that the training would provide ICPC and the ACTU members the opportunity to take stock, share experience and evaluate the journey so far in the deployment of the Ethics and Integrity Compliance Scorecard (EICS) within the service, to appreciate areas of strength and vulnerability and make adjustments in areas where improvement was necessary.

Earlier in his welcome address, the Resident Anti-Corruption Commissioner (RACC), ICPC Oyo State Office, Barrister Lucky Erewa, stated that the aim of the two-day programme was to bring to the front burner, series of initiatives embarked upon by ICPC, and to seek effective collaboration with the ACTUs of MDAs.

Thereafter, while delivering a paper titled “Overview of the National Ethics and Integrity Policy”, an Assistant Director of the Commission, Mrs. Ese Okwong of the Public Enlightenment/Education Department, stated that the policy was developed in response to the many damaging effects of corruption in both public and private sectors, with a view to curbing the problems of lack of integrity.