The National Ethics and Integrity Policy was developed by the Independent Corrupt Practices and Other Related Offences Commission (ICPC) in collaboration with the Office of the Secretary to the Government of the Federation (OSGF) and the National Orientation Agency (NOA) in response to the many damaging effects of corruption in both the public and private sectors.

The policy was approved by the Federal Executive Council (FEC) on 19th August 2020 and launched by President Muhammadu Buhari on 28th September 2020 during the 2nd National Summit on Diminishing Corruption in the Public Sector to celebrate ICPC’s 20th anniversary.

ICPC had earlier developed a National Values Curriculum for the teaching of values in schools to young Nigerians. This National Ethics and Integrity Policy builds on the basics of that curriculum, to entrench positive values in the society.

The Policy obligates all Nigerians, and everyone who resides within the borders of Nigeria or who relates with the country in one form or the other, to commit to uphold the following core values of Human Dignity, Voice and Participation, Patriotism, Personal Responsibility, Integrity, National Unity and Professionalism.

The violation of any of these principles is actionable by relevant government agencies both at the federal and state levels.

The principles of the Policy are to be interpreted in line with provisions of federal laws and regulations, the Nigerian Constitution, standing rules and codes of conduct of professional bodies and statutory rules guiding public and private institutions.

The Policy was developed with a view to help restore and revitalize the public and private sectors, while enhancing values and integrity, and tackling corruption in the larger Nigerian society. Specifically, the policy was designed to: 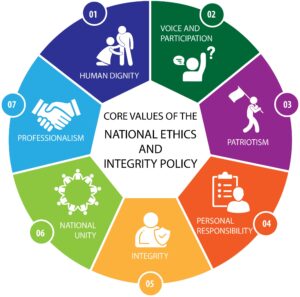 BRIEF ON THE SEVEN CORE VALUES:

The implementation of the Policy is planned to be in phases which include:

ENFORCEMENT OF SANCTIONS AND PENALTIES

The Independent Corrupt Practices and Other Related Offences Commission or other law enforcement agencies can sanction or prosecute anyone who goes against the principles and values in this National Ethics and Integrity Policy or fails to implement its directives. The Policy can also be used by anyone to seek justice.

The public and private sectors at the federal, state and local government levels are all encouraged to adopt the Policy and its principles. This Policy shall also be used in negotiating procurement, trade, socio-economic, cultural/creative industry agreements, etc.

The implementation of this policy will be coordinated by OSGF, ICPC and NOA supported by all Ministries, departments and agencies as well as institutions at the state and local government levels.

The development of the National Ethics and Integrity Policy by ICPC with its partners, and its subsequent approval for implementation represents a significant milestone in Nigeria’s quest for a national rebirth that will introduce accountability and transparency in governance.

It should also recondition its citizens to work for national development; while encouraging them to cultivate respect and love for fellow citizens.

With this policy in operation, selfishness, violence, disunity and ineffective governance would be things of the past for Nigeria to take its pride of place in the comity of nations. 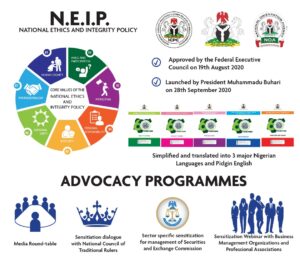