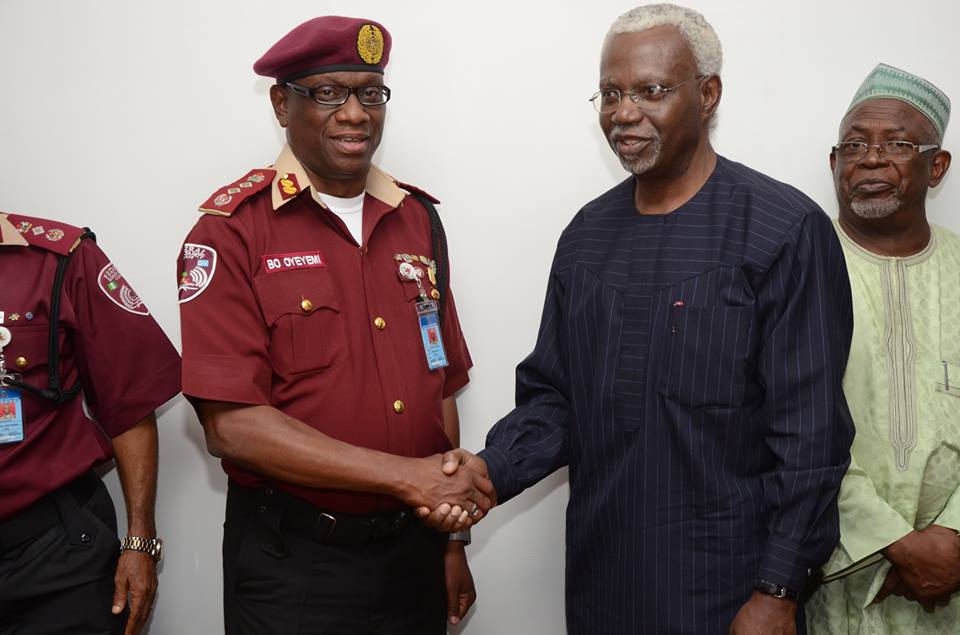 In its determination to restore sanity in the issuance of the National Driver’s Licence and ensure corruption-free operations of the FRSC, the Corps Marshal, Boboye Oyeyemi and the Chairman of the Independent Corrupt Practices and Other Related Offences Commission, (ICPC), Ekpo Nta have agreed to collaborate. This was the outcome of the meeting between the Corps Marshal of the FRSC and the Chairman of the ICPC, during Oyeyemi’s courtesy visit to the ICPC Headquarters Abuja.

The ICPC Boss who described FRSC as an exemplary organisation whose activities have impacted positively on the image of the country, stated that if there was any organisation in the country that he would recommend for international accolade for what is good in Nigeria, it would be the FRSC.

He commended the Corps for its efforts at mobilising members of the public for road safety campaign through its Special Marshal initiative and enjoined all patriotic Nigerians to join in the task of making the nation’s roads safer.

On the restoration of sanity in the issuance of the driver’s licence, the ICPC Chairman gave kudos to the FRSC for its initiative in reforming the licensing system of the country, pointing out that with its reciprocity status, it would be embarrassing to Nigeria, if the driver’s licences issued in the country and presented to foreign countries are found to be fake. This, he said, makes it imperative that relevant stakeholders should work together to ensure that the integrity of the system is protected and those that engage in parallel production or tout in the documents are identified and punished accordingly.

“Nigerian Driver’s licence has reciprocal status with other foreign countries. It will therefore, embarrass the country, if fake licences are allowed to be presented to reciprocal countries as the genuine licences produced in the country,” he stated.

“The Driver’s licence is also an identity document that many people rely on to transact business. We would therefore, work with the FRSC to ensure that those that engage in parallel production or tout in the documents are identified and punished,” he further stated.

In his remarks the Corps Marshal thanked the Chairman of the ICPC for his interest in matters of road safety as demonstrated by his long standing association with the FRSC as a member of the Special Marshal. The Corps Marshal further stated that he decided to visit the ICPC in order to share ideas of road safety with the Management of the Commission and to solicit the support of the Commission in ensuring the restoration of sanity in the issuance of the licensing system of the country.

The Corps Marshal pointed out that he is determined to leave a legacy of corruption-free organisation for the Corps and would work hard to sustain its positive image through various policies and programmes including the inauguration of the FRSC Antic-Corruption Committee.

Oyeyemi expressed dismay at the practice of some people who continue to patronise touts or rely on third party to obtain fake licences at ridiculously high prices against the N6,350 that has been set by the Joint Tax Board (JTB) for the acquisition of the licences. He therefore, called on the ICPC to collaborate with the FRSC in sanitising the system by detecting the fraudsters and bringing them to book. He also solicited the support of the ICPC in monitoring the operations of his men on patrol, saying as an organisation that is built on integrity, FRSC does not condone any form of corrupt practice and any of his men found to be engaged in any act of corruption would not be given cover.

The Corps Marshal assured the ICPC Chairman that the doors of the FRSC will remain open for the success of the partnership including the utilisation of the platforms of its Academy and Training School to build the capacity of the staff of the two agencies in order for them to operate on the same level for the restoration of sanity in the operations of the Corps and the licensing system of the country.

The Corps Marshal was accompanied on the visit by some principal officers of the FRSC including the Deputy Corps Marshals in charge of Admin and Human Resources; Technical Services and Special Duties and the Corps Legal Adviser, among others.