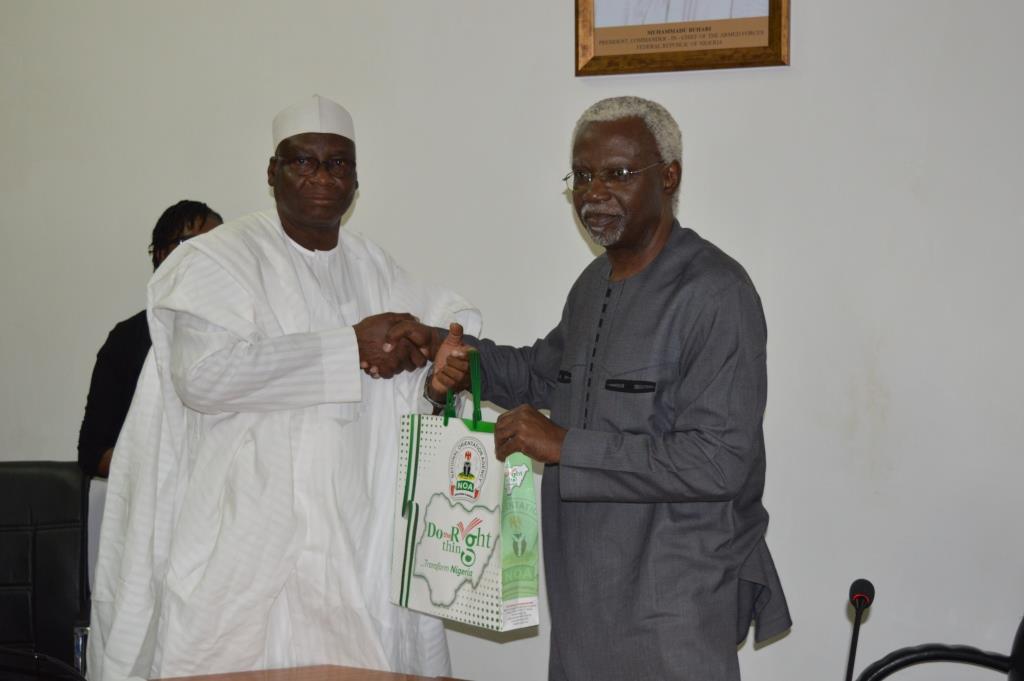 Ethics, Values Essential to the Fight against Corruption – ICPC Chairman

The Chairman of the Independent Corrupt Practices and Other Related Offences Commission (ICPC), Mr. Ekpo Nta, has declared that ethics and values are very essential for the fight against corruption to succeed in Nigeria.

He made the declaration recently while playing host to the Director-General of the National Orientation Agency (NOA), Dr. Garba Abari, who was at ICPC on a courtesy call.

Mr. Nta revealed to the D-G and his entourage that ICPC had submitted a draft National Policy on Ethics and Integrity to the Attorney-General of the Federation, and he hoped that when approved by the Federal Executive Council, it would form the foundation on which future anti-corruption strategies would be built.

He further explained that people erroneously regard ICPC strictly as a law enforcement agency, noting that the danger of excluding ethical and integrity imperatives from its anti-corruption assignment might actually lead to the neglect of ‘the tap-root of flourishing corruption.’

Nta added that 70 per cent of the work of ICPC as prescribed by the United Nations Convention Against Corruption (UNCAC) should be on prevention, which the Commission is pursuing through public enlightenment and mass mobilization.

The ICPC Chairman also drew attention to the fact that the Commission’s National Values Curriculum has been running at the primary and basic school level since 2007 that it was infused into various subjects ‘to catch them young and get them to imbibe the culture of integrity early’.

Mr. Nta urged the D-G of NOA to help sensitize the youths on the dangers of acquiring fake documents in order to travel overseas, also pointing out that NOA had much to do in sensitizing Nigerians about the activities of job scammers that swindle unsuspecting citizens by asking them to pay money in order to secure employment.

He frowned at the Nigeria’s reward system which he said was tilted towards publicizing punishment for wrong-doing while under-reporting or completely ignoring the establishment of a reward system for doing good. He advocated that people who do good should be given cover-page and headline publicity as it is done for those who do bad or steal public funds.

The ICPC Chairman also suggested that NOA could use the lessons on the outcomes of ICPC investigations and prosecution as themes for its publicity campaigns on the enthronement of a new culture of integrity among Nigerians.

Earlier in his remarks, the D-G of NOA had said that he was at ICPC to seek partnership in the fight against corruption. He also explained that the “get rich quick” mindset was responsible for endemic corruption in Nigeria.

“We are here to partner, cooperate and to learn from your experience as an anti-corruption enforcer, as corruption preventer and also to learn of the strategies you have been putting in place so that we can enrich what we are doing at our end”, he said.

He praised ICPC for the impressive job it had done in the field of civic education and solicited for continuous collaboration and support towards a new Nigeria that is free of corruption.