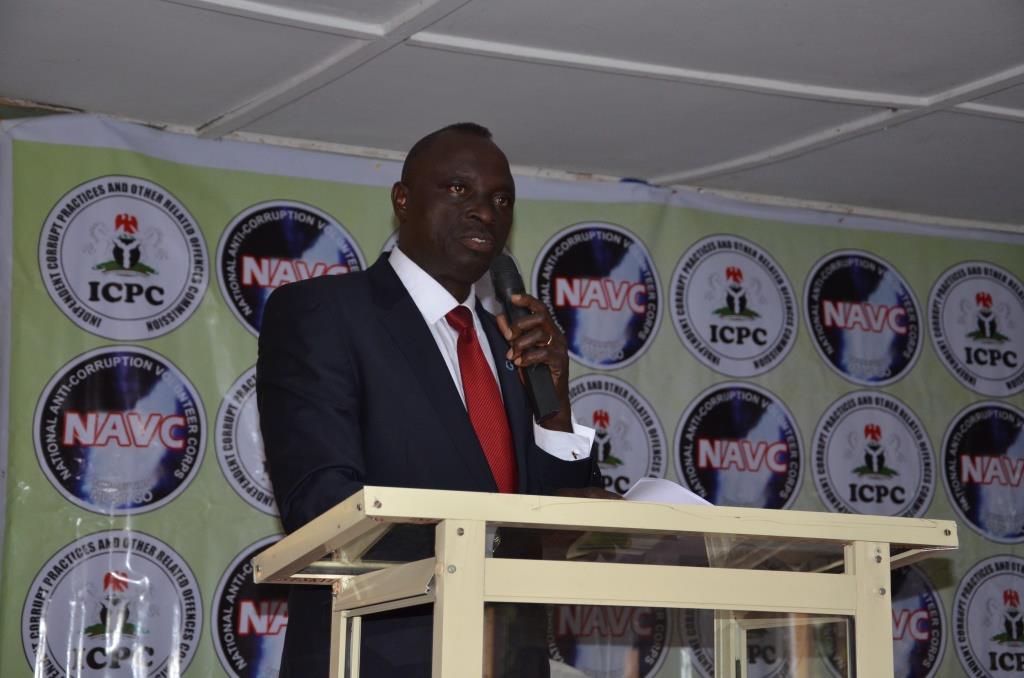 As part of plans to ensure that interested person take active part in the anti-corruption campaign, the Independent Corrupt Practices and Other Related Offences Commission (ICPC) recently inaugurated the Ekiti State Chapter of the National Anti-Corruption Volunteer Corps (NAVC).

Speaking at the inaugural ceremony, the National Coordinator of NAVC and the representative of the ICPC Chairman, Mr. Mike Sowe, explained that NAVC was established by ICPC as one of the preventive measures against the spread of corruption in Nigeria.

Mr. Sowe explained further that ICPC was inaugurating a rebranded NAVC in Ekiti State, because the old structures of the corps had been disbanded some years ago due to the illegal activities of some state coordinators who had deviated from the ideals behind the establishment of the corps.

According to him “As a matter of fact, some state coordinators had turned the NAVC into a para-military organisation, arresting, interrogating and even putting people in detention cells for allegedly engaging in corrupt practices”.

The National Coordinator lamented that the situation became so bad that one of the coordinators who engaged in such activities was even charged to court for corruption by the Commission.

He informed members of the rebranded NAVC that new operational guidelines and structures to ensure checks and balances at the local governments, states and national levels of the corps had been established.

He emphasised that in order to forestall a repetition of past mistakes, requirements for membership of NAVC were now strict, “NAVC is no longer for all-comers. Among other requirements to be eligible for membership, an applicant must be gainfully employed with a verifiable source of income and must be literate and have a minimum of Senior School Certificate”, he explained.

Mr. Sowe added that, a mandatory training programme would be organised for members of the corps while cautioning that ICPC would not hesitate to withdraw the membership of and prosecute any member who errs.

Also speaking at the event, the representative of National Orientation Agency (NOA), Ekiti State, Mr. Omotosho Rotimi noted that corruption affects the development of the society. He urged members of NAVC to take the task of fighting corruption seriously and see themselves as agents of a great and positive change in the society.

The Coordinator of the newly inaugurated state chapter, Mr. Francis Agbaje, who spoke on behalf of his colleagues promised to do their best in intensifying the anti-corruption campaign in the state.