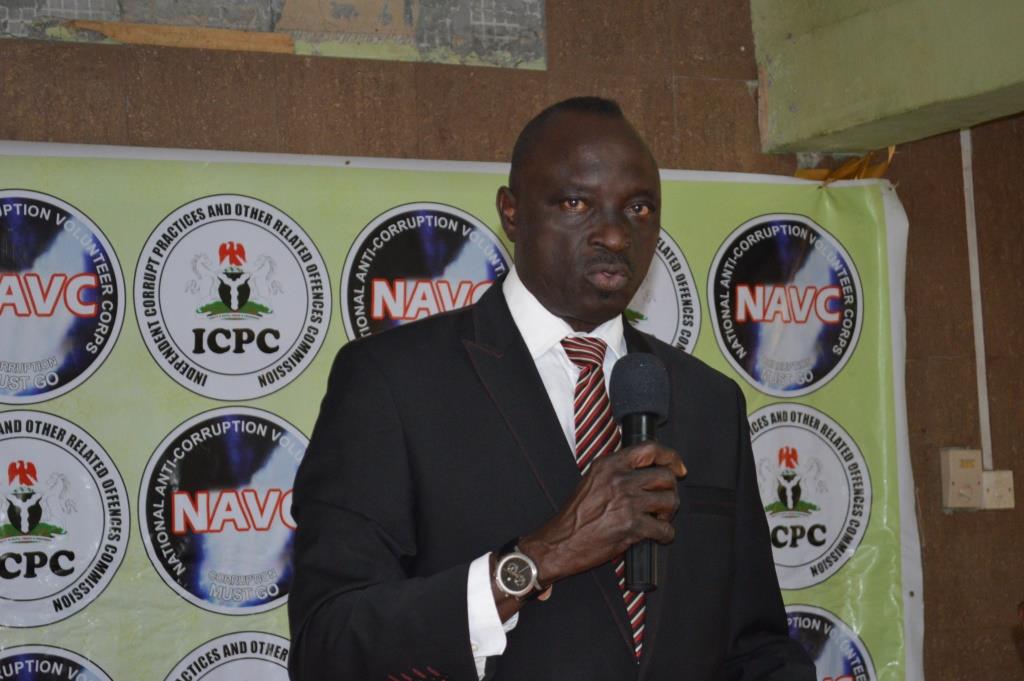 The Independent Corrupt Practices and Other Related Offences Commission (ICPC), has commended members of the rebranded National Anti-Corruption Volunteer Corps (NAVC) for their decision to join the Corps in order to contribute to the war against corruption.

Mr. Mike Sowe, the National Coordinator of NAVC, made the commendation in Abeokuta, Akure and Ibadan during the inauguration of the newly elected officials who would steer the affairs of the Corps in Ogun, Ondo and Oyo States for a period of two years.

Mr. Sowe declared that for the war against corruption to succeed, there was need for individuals and groups to partner with the anti-corruption agencies. He praised the officials for electing to join the Corps, describing it as the most patriotic decision any Nigerian could ever make.

“The NAVC underlines the important role volunteer citizens can play to entrench the values of fairness, honesty and integrity so that our country can achieve its full potentials in all facets of human development particularly in the provision of better health services, quality education at all levels, improved power supply, better roads and accelerated infrastructural advancement,” he stated.

The National Coordinator also advised the officials and members to remain above board in the conduct of their business. He said, “You are now trend-setters who will reassure our citizens that doing the right thing and abandoning negative behaviour are crucial for progress and development.” He went on to warn them that the Commission would not hesitate to prosecute volunteers that commit any criminal offence.

He highlighted the duties and responsibilities of NAVC to include mobilization, education and creation of public awareness on corruption; its ills; and the laws governing the behaviour of officials and their responsibilities. Others include assisting the Commission in the acquisition and dissemination of information; and reporting acts of corruption.

Regarding the investigation of reports of corruption, Mr. Sowe categorically stated that NAVC could not investigate on their own; therefore, all reports must be forwarded to ICPC for investigation and possible prosecution.

Dignitaries from all walks of life in Abeokuta were present to witness the inauguration ceremony. Amongst whom were Commissioner of Police, Ogun State, CP Ahmed Iliyasu; Sector Commander  of the Federal Road Safety Corps (FRSC) Ogun State, Corps Commander Clement Oladele; and the Chief Medical Director of the Federal Medical Center, Abeokuta.

In a goodwill message, the Commissioner of Police in Ogun State, who was represented by CSP Abiodun Bakare, pledged to stand by NAVC as it complements ICPC in the effort to rid the state and Nigeria of corruption.

The sector commander of FRSC, who was represented by DRC Adesoye Adejoke, in his remarks, lauded the volunteers for choosing to dedicate their time and resources to fight corruption. He said “FRSC is committed to fighting corruption; in whatever capacity FRSC can assist ICPC, in whatever capacity you want us to key into the fight against corruption, we are ready to support you. Should you see any corrupt practice with regard to FRSC, do not cover it but report.”

The NAVC was also inaugurated in Akure, the capital of Ondo State as well as Ibadan, the Oyo State capital. Both events were well attended by dignitaries within the states. Before the inauguration ceremony, successful elections had seen the emergence of Idris Abu as the state coordinator for Ogun State, Akinbobola Gbenga Ayo for Ondo State and Prince Adeyemo for Oyo State.

Speaking on behalf of the newly inaugurated volunteers, Idris Abu vowed to perform their functions as stipulated in the guidelines of the new NAVC, adding that they would do their best to see that corruption is stamped out of their states.