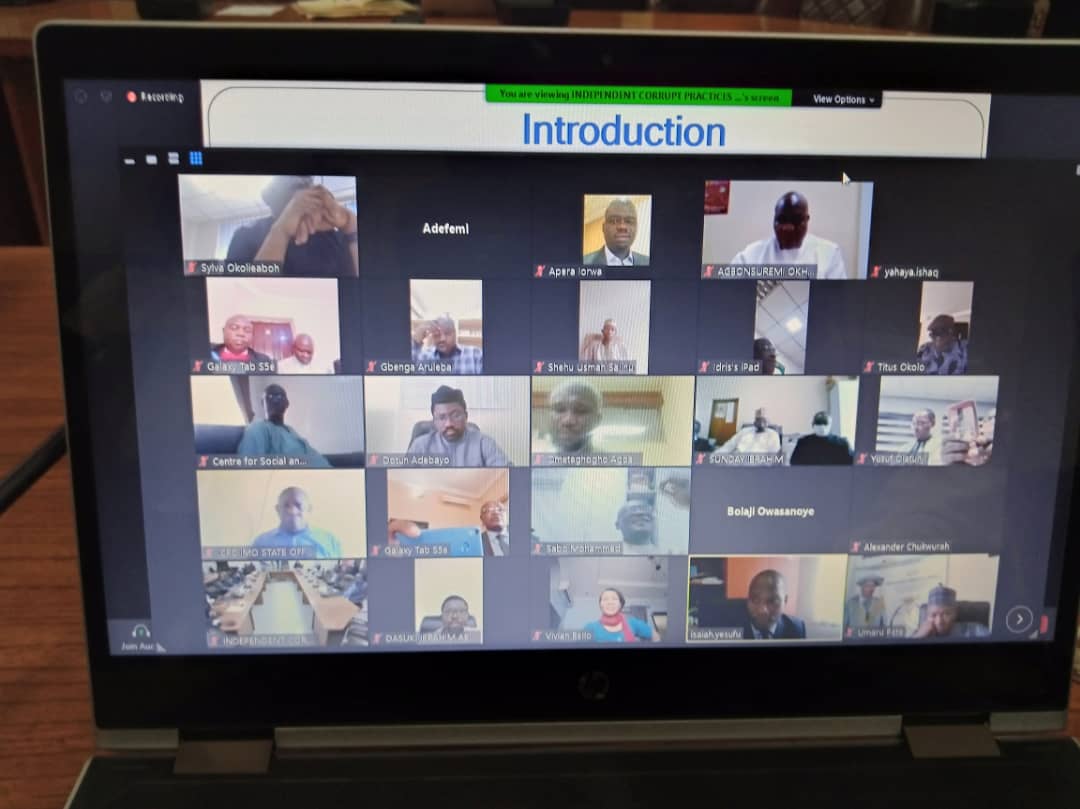 In response to increasing public concerns on the handling of the Federal Government’s Covid-19 funds and palliatives, the Independent Corrupt Practices and Other Related Offences Commission (ICPC), in collaboration with the Office of the Accountant-General of the Federation (OAGF), has convened a meeting of relevant stakeholders to examine the measures put in place to ensure transparency and accountability in the funds’management.

Due to the risk associated with social proximity because of the Coronavirus pandemic, the meeting was held virtually on the Zoom platform and had in attendance representatives of the Ministry of Humanitarian Affairs, Disaster Management and Social Development (FMHADMSD), the media, civil society organizations (CSOs), etc.

The Chairman of ICPC, Prof. Bolaji Owasanoye, who anchored the meeting, in his welcome remarks, listed some of the proactive measures that had been taken by the Commission to prevent corruption in the Covid-19 funds handling to include: the issuance of an advisory in March at the beginning of the pandemic lockdown; the setting up of an ICPC monitoring team; the appointment of third party observers at the behest of the Presidential Task Force on Covid-19 Funds itself; the drawing up of guidelines for management of the funds by the PTF; and sundry anti-corruption messaging in the media to sensitize officials on the need for accountability.

Prof. Owasanoye further disclosed to the participants that the FMHADMSD had been invited specifically to address questions that would arise on the government’s Conditional Cash Transfer (CCT) and the Home-Grown School Feeding (HGSF) programmes given the controversies surrounding their implementation in the period of the lockdown.

The meeting proper began with a presentation by Mr. Sylva Okolieabor, representing the OAGF, titled: Framework for Management of Covid-19 Funds in Nigeria under the TSA wherein he discussed some of the steps taken for probity in the emergency funds handling. According to him, these generallyincluded insisting on the National Assembly’s appropriation before the funds could be spent as well as publishing expenditures on government’s transparency portal www.opentreasury.gov.ng and individual spending ministries’ websites.

This was followed by a presentation entitled: Delivering a Transparent Food Ration Distribution by Mr. Dotun Adebayo of the FMHADMSD. He said the school feeding programme had had some unspent budgeted funds at the end of April 2020, and since pupils were no longer in school because of the Covid-19 crisis, the National Social Investment Office (NSIO), in linewith the President’s directive in one of his broadcasts on giving palliatives to the vulnerable in the society, sought for and secured official approval to distribute food items to the school pupils’ families in their various homes with the funds. He assured that the distribution was being done systemically with an eye on accountability and in good faith.

Another presentation by the FMHADMSD which dealt with the subject of palliatives was titled: Delivering Palliatives Transparently: Cash Transfer in Focus and was made by Mr. Iorwa Apera of the NSIO. He reminded the audience that the President had directed that the Conditional Cash Transfer payments to the poor be made as part of government Covid-19 palliatives, and that these included the arrears of January and February 2020 in addition to two months’ advance payments. Mr. Apera revealed that the CCT programme was yet to access any other government funds for the purpose of palliatives as believed in some quarters, while noting that both the Accountant-General of the Federation and the Auditor-General of the Federation had been playing their statutory roles in the disbursement of the CCT funds. He also said the programme was being run with monitoring by third party CSOs and others for the purpose of transparency.

In yet another presentation titled: Guidelines for the Conduct of Procurements that Respond to Covid-19 made by Engr. Isaiah Yesufu of the Bureau for Public Procurement, it was revealed that retroactive approvals in times of emergency were recognised by the Public Procurement Act 2007. However, Mr. Yesufu said this provision had to be regulated by the Bureau on the basis of the type of goods or services to be procured through the introduction of emergency guidelines, explaining that this was meant to curb the high corruption risks in emergency procurements while fast-tracking the delivery of essential and critical goods and services.

For civil society organisations, there was a presentation to assist them monitor the Covid-19 funds entitled: Engaging CSOs for Covid-19 Funds Utilization Monitoring. The Chairman of HEDA Resource Centre and Civil Society Network Against Corruption, Mr. Olanrewaju Suraju, who made it, listed logical steps CSOs should follow in doing this which ranged from identifying beneficiaries, obtaining relevant contract documents all through to making confidential reports to relevant government agencies on their findings and follow-up advocacy for public ownership. He also urged the OAGF to initiate collaboration with CSOs to monitor the handling of emergency management funds.

The last presentation was made by the Director of Operations, ICPC, Mr. Akeem Lawal and it was titled: ICPC Monitoring Obligations and Strategy Re: Covid-19 Emergency. Among other things, he spoke about FG’s commitments and responses to the Covid-19 pandemic to include the release of N10billion and N5billion to the Lagos State government and the National Centre for Disease Control (NCDC) respectively and other huge receipts and donations to government for managing the pandemic. He also explained the bases for ICPC intervention in the Covid-19 funds handling to include the statutory duty of the Commission to eliminate or reduce corruption in government activities; the huge financial receipts, donations and investments of government in the pandemic management which requirevalue-for–money; as well as ensuring transparency and accountability in the utilization of funds and distribution of palliatives.

Mr. Lawal further made a rundown of the Commission’s efforts in preventing corruption in the Covid-19 funds management which were generally captured in the ICPC Chairman’s welcome remarks. Notably, he said the Commission would be taking enforcement actions on reports of violations that it had received.

His presentation was followed by the interactive session which saw participants asking questions and making enquiries such aswanting to know the total number of beneficiaries on the CCT register or whether the register was in the public domain; andwhy school pupils were being fed at home when one of the cardinal objectives of the programme was to attract children to school.

The presenters then took turns to provide appropriate responsesto the questions.