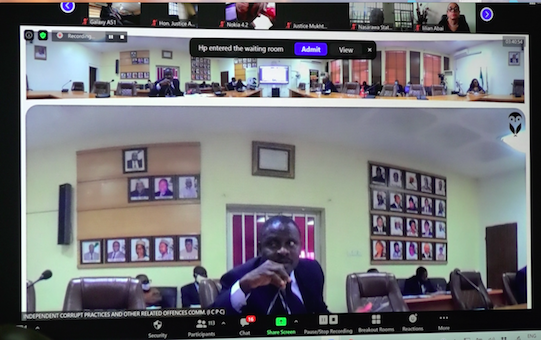 The Independent Corrupt Practices and Other Related Offences Commission (ICPC) has organized a capacity building training for judges to shore-up their knowledge on emerging corruption matters and asset recovery.

The training, held in collaboration with the National Judicial Institute (NJI), recently, had the Chief Justice of Nigeria, Mohammed Ibrahim Tanko, CFR, advising judges not to sacrifice the rule of law on the altar of sentiments.

Tanko, while delivering his keynote address, noted that training and capacity building were integral parts of the legal profession. He applauded the organisers for taking such initiative.

The CJN added that the forum was designed to acquaint participants with emerging developments such as digitisation in corruption and assets recovery.

“This forum will afford participants the opportunity to discuss salient issues on the requisite procedure in assets tracing and recovery”, he said.

He finally charged Judges to ‘Be proactive and not allow sentiments stand in the way of the rule of law’.

Earlier in his welcome address, the Chairman of ICPC, Professor Bolaji Owasanoye, said that the collaborative effort between ICPC and NJI was providential as it coincides with Nigeria’s 60th anniversary themed, ‘Together’, therefore necessitating the importance of unitedly dealing with the challenges of corruption for optimum results.

Prof. Owasanoye recalled that at the Commission’s 20th anniversary last week, the CJN had reiterated the Judiciary’s readiness to fight corruption in collaboration with other arms of government.

He went on to say that evolving forms of corruption such as money laundering using cryptocurrency is becoming common and posing challenges to the judicial system.

He therefore called for the adoption of a digitised approach in dealing with emerging issues on corruption.

The ICPC boss said the workshop was also designed to help judges look into the minds of investigators and understand what they do.

While delivering her remarks, the Administrator of NJI, Hon. Justice Roseline Bozimo, OFR, expressed the hope that the workshop would avail participants the opportunity to discuss salient issues arising from fighting corruption holistically especially in the area of confiscation of the proceeds of corruption.

She also called on anti-graft agencies and other stakeholders to rise to the challenge of curbing the menace.

In her words, “The on-going fight against corruption remains one that all stakeholders must close ranks to fight”.

She encouraged Judges to interpret the law without bias or ill-will.

Some of the areas that the 2-day workshop is expected to cover include: The Corrupt Practices and Other Related Offences Act 2000: Elements of offences under the Act, Prospects and Challenges; Assets tracing investigation, seizure and forfeiture of illicit wealth in the fight against corruption and confiscation proceedings; Impact of international legal frameworks amongst others.