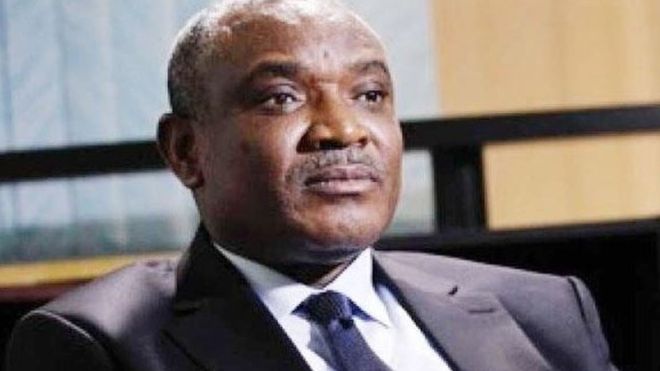 The former Chairman of the disbanded Special Presidential Investigation Panel for the Recovery of Public Property (SPIP), Mr. Okoi Obono-Obla, has been arraigned in court by the Independent Corrupt Practices and Other Related Offences Commission (ICPC), on allegation of offences bordering on fraud.

Obono-Obla, who was arraigned before Justice Olukayode Adeniyi, of the Federal Capital Territory (FCT) High Court, Apo, for allegedly forging an O’ Level certificate, was also charged alongside his Special Adviser on Protocol, Aliyu Ibrahim and the Managing Director of ABR Global Petroleum Resources Limited, Daniel Omughele, for allegation of diverting N19.9 million meant for the furnishing of SPIP’s office.

ICPC in a 10-count charge accused the former SPIP boss of knowingly presenting a fake result with a credit pass in English Literature to the University of Jos, with which he secured admission to read Law, contrary to Section 19 of the Corrupt Practices and Other Related Offences Act, 2000 and punishable under the same section.

The Commission alleged that while Obono-Obla did not seat for the Ordinary Level General Certificate Examination (GCE) in English Literature in 1982, he presented a result of the same GCE to the University of Jos, in 1985, containing Credit 6 from Mary Knoll College, Ogoja. An offence which is contrary to Section 363 and punishable under Section 364 of the Penal Code Act 532, Vol. 4 Laws of the Federation of Nigeria, 2004.

The charge further revealed that Obono-Obla, Aliyu Ibrahim and Daniel Omughele, in July, 2018, diverted N18.2 million out of N19.9 million released to SPIP for office furniture by the Nigeria Deposit Insurance Cooperation (NDIC).

Ibrahim was accused of receiving the money from six contractors who had won bids for the office furnishing contrary to Section 26 (c)(i) of the Corrupt Practices and Other Related Offences Act, 2000 and punishable under Section 68 of the same Act.

They all pleaded not guilty when the charge was read to them. The counsel, Paul Irokore (SAN), A. C. Ozokwo and Emmanuel Okere for Obono-Obla, respectively prayed the court to grant them bail in liberal terms.

Counsel to ICPC, Samuel Ipinlaye, who did not oppose the bail however prayed the court to grant them bail on such conditions that will ensure their attendance in court for trial.

The trial Judge, Adeniyi, while ruling on the bail applications granted them bail in the sum of N10 million each and a surety in like sum.

The court further ruled that the surety must be directors in the employment of the federal government or the Federal Capital Development Authority (FCDA).

The accused were also to submit their international passports with the senior Registrar of the Court.

It would be recalled that Mr. Obono-Obla was arrested by ICPC in March 2020 after being declared wanted by the Commission in October 2019.

Obono-Obla had also challenged the powers of ICPC to investigate allegations of certificate forgery leveled against him but this was dismissed by the courts in May 2020.

The case was adjourned to 17th, 18th and 19th March for commencement of trial.