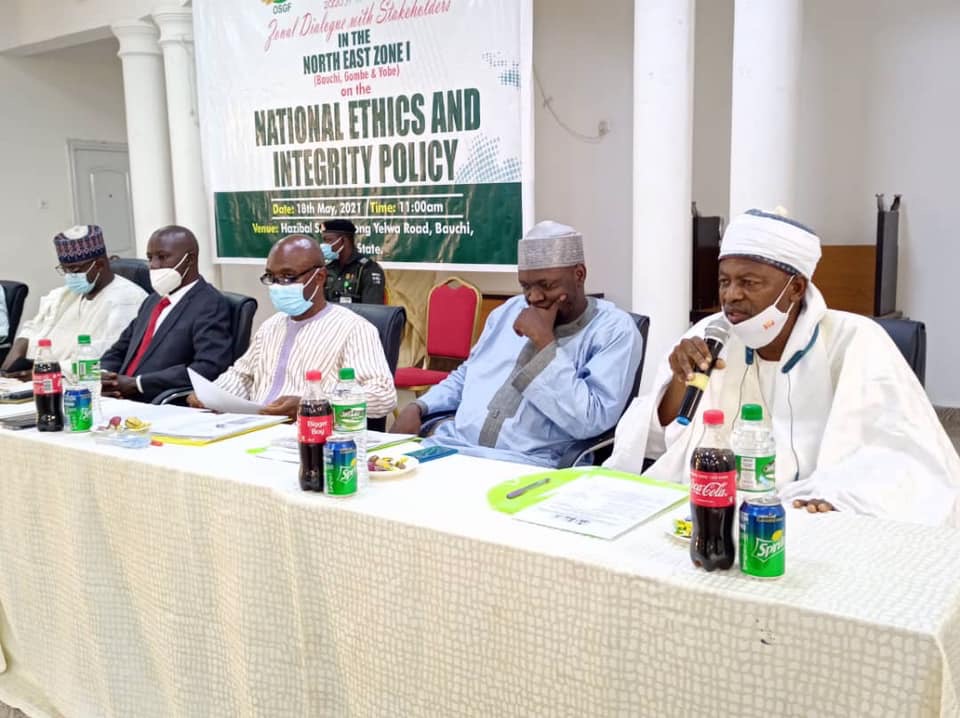 Religious, traditional and other critical stakeholders have embraced with great enthusiasm and appreciation the implementation of National Ethics and Integrity Policy (NEIP) during the North-East Zonal Dialogue recently held in Bauchi town, Bauchi state.

The dialogue, which was organized by the Independent Corrupt Practices and Other Related Offences Commission (ICPC) in collaboration with the National Orientation Agency (NOA), attracted participation marked by complete attention of prominent leaders of all faiths, high government functionaries and non-governmental actors.

The stakeholders extensively discussed the desirability and appropriateness of the policy when implemented, in resuscitating our lost values of honesty and integrity as a nation.

The NEIP Policy, according to the Chairman of the Commission, Professor Bolaji Owasanoye, SAN, represented by an ICPC Honorable Member, Alhaji Yahaya Dauda, was in recognition of the pivotal role value re-orientation plays in national development.

Professor Owasanoye further stated “The values of yester-years of truthfulness, nationalism and respect for human dignity have lost on us that are why corrupt practices have become so rampant in the society.”

The representative of Bauchi Emirate Council, the District Head of Bauchi town, Alhaji Nuru Adamu Jumba said that “The cherished moral values for the respect of elders and character building in our educational institutions must be urgently revived. Impossible to satisfy demand for wealth accumulation by all means should be avoided. Thus, the Bauchi Emirate is fully backing the implementation of the Policy.”

Looking into the Islamic perspective to the implementation of the Policy, Sheikh Dr. Ibrahim Disina stressed that Islamic scholars would be ready to actually promote and implement  the National Ethics and Integrity Policy that are  in tandem  with Islamic moral teachings”.

The representative of the Christian Association of Nigeria (CAN) Evangelist Okere Emmanuel expressed that Christians were in full support of the Policy and it would continue to support the promotion of good character and the good quality of honesty required to make this country better again.

ICPC, in collaboration with the Office of the Secretary to the Government of the Federation (OSGF) and NOA initiated the NEIP, which was approved and adopted by the Federal Executive Council on 19th August, 2020 and launched by President Muhammadu Buhari, GCFR, on 28thSeptember, 2020.