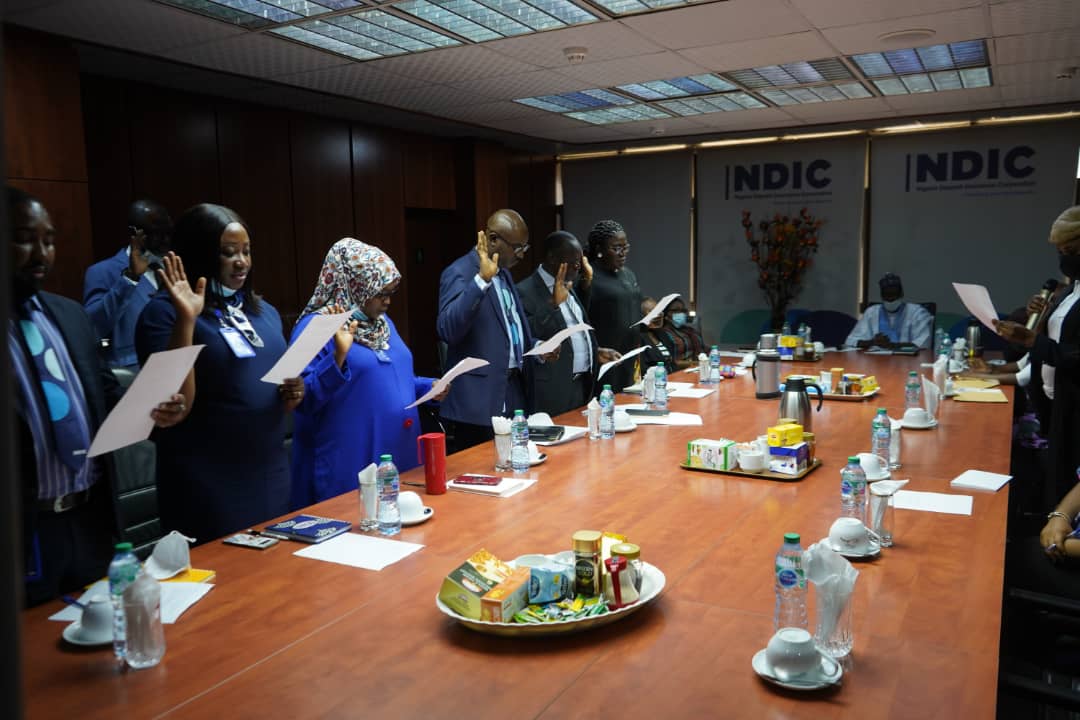 …New ACTU inaugurated in the Corporation

The MD who gave the commendation at the inauguration and induction of the reconstituted ACTU of the Corporation following the retirement and expiration of tenure of the old members stated “Your agency has continued to give impetus to the current administration in the war against graft and other forms of corruption.

Mr. Hassan stated that ICPC should not rest on its oars as NDIC is ever ready to collaborate in this regard, adding that in order to tackle the menace of corruption, all hands needed to be on deck.
He further stressed that corruption had become a global concern, saying that it destroyed rule of law, caused political instability, retarded social development and eroded public trust in governance.

The NDIC boss further said that the NDIC ACTU had in times past engaged in preliminary investigation and through system study ensured compliance to policies by all staff of the Corporation.
According to him, “I have no doubt in my mind that this inauguration will not only go a long way in strengthening our system, processes and procedures to continue to prevent corruption within the corporation. But it will also in no small measure support the Federal Government’s National Anti-Corruption Strategy which was launched by the Federal Executive Council on the 5th of July, 2017.”

In his goodwill message, ICPC Chairman, Professor Bolaji Owasanoye, SAN, described NDIC ACTU as a source of pride to the ICPC in view of its activities and achievement which included sensitization of staff and system study and review of the Corporation’s processes.

The Chairman who was represented by the Director in charge of System Study and Review Department, Mr. Abba Udofia, fsi, urged the management of NDIC to sustain the legacy which according to him promotes transparency and accountability in their operations and systems.

Professor Owasanoye highlighted the duties of ACTUs to include examination of systems, processes and procedures that are prone to corruption; developing and reviewing a code of ethics for staff and ensuring compliance with same; monitoring budget implementation of the Corporation; implementing the Ethics and Integrity Compliance Scorecard; and undertaking preliminary investigations into complaints and reports received, amongst others.

He therefore advised the newly appointed members of ACTU to “be responsible and responsive in the exercise of your functions and avoid questionable acts given the strategic role you are expected to play. Remember, he who comes to equity must come with clean hands.”

In her acceptance speech, the newly sworn-in chairperson of Unit, Margaret Iveren Anyira, Assistant Director, Internal Audit Department of the Corporation expressed appreciation to the management of NDIC and ICPC for placing faith and honour in them.

She pledged, “We will carry out this assignment with dedication and great passion while standing on integrity, which is one of the core values of the corporation.”