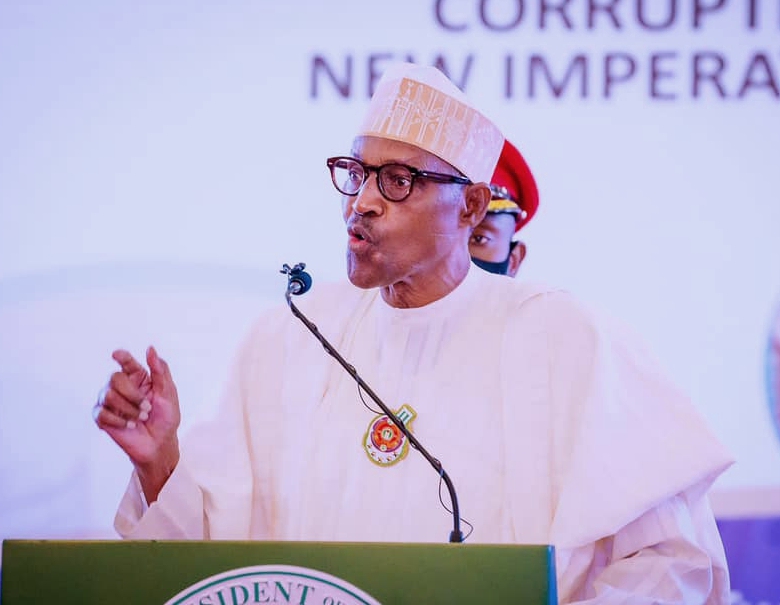 President Muhammadu Buhari has vowed to severely punish anybody in the public service that is involved in over-bloating the federal government workforce through illegal recruitment and cover-up of ghost workers.

President Buhari who spoke at the 3rd National Summit on Diminishing Corruption in the Public Sector, organized by the Independent Corrupt Practices and Other Related Offences Commission (ICPC) and the Office of the Secretary to the Government of the Federation (OSGF), complained that illegal recruitments and ghost workers syndrome had bloated the workforce leading to unnecessary high cost of governance which was impacting the economy negatively.

The President further decried the duplication of projects by Ministries, Department and Agencies (MDAs) in the annual national budget which had become a strain on the revenue of the federal government, adding that heads of such MDAs will be sanctioned.

Buhari expressed delight that both the legislative and judicial arms of government were under spotlight on managing the cost of governance, maintaining that governance was a collective responsibility, not just the responsibility of the executive arm.

He also explained how his government had reduced the cost of governance by focusing on abandoned and ongoing projects which were started by previous administrations.

He however noted that from the findings of ICPC, some MDAs have devised dubious means of presenting new projects as ongoing ones, carrying out illegal recruitment, padding their payroll and sustaining ghost workers.

He said, “Those who illegally bring in personnel into the public service and conceal ghost workers must be and will be severely punished.

“We have ensured that MDAs do not put forward new capital projects at the expense of on-going projects. Government has noted through ICPC that some MDAs have devised a fraudulent practice of presenting old projects as on-going projects. Sanctions will be meted out to the heads of such errant MDAs. I have confidence that ICPC will continue to maintain the vigilance required.”

Earlier, the Chairman of the Independent Corrupt Practices and Other Related Offences Commission (ICPC), Professor Bolaji Owasanoye, SAN in his speech at the occasion, observed that illegal recruitments into the public service was fueling high cost of governance.

He said, “ICPC investigation of some cases of illegal recruitment forwarded to us by the Head of the Civil Service of the Federation has so far implicated the Ministry of Labour, and University College Hospital, Ibadan and a number of corrupt staff of other MDAs at a lower level. This abuse of power is consummated with complicity of compromised elements in IPPIS. These cases are currently under investigation.”

Owasanoye noted that illegal recruitments were possible through syndicates that “corruptly employ unsuspecting Nigerians; issue them fake letters of employment, fraudulently enroll them on IPPIS and post them to equally unsuspecting MDAs to commence work”.

The ICPC Chairman also revealed that the Commission uncovered 257 projects, costing over N20.1 billion, that were duplicated in the 2021 budget, pointing out that duplication of projects by MDAs was contributing negatively to high cost of governance.

He said, “ICPC review found that 257 projects amounting to N20.138 billion were duplicated in the 2021 budget leading us to submit an advisory to the Minister of Finance which was promptly actioned by the Minister to prevent abuse.”

Highlight of the event was the presentation of the 2021 Public Service Integrity Award to two Nigerians who had exhibited exceptional acts of integrity.

Also recognized was a private citizen, Ikenna Steve Nweke, a PhD student from Imo State, studying in Japan, who was conferred with the Citizens Anti-Corruption Volunteer Group Icon.

Speaking on the award, President Buhari expressed delight that “some public officers have not only demonstrated the core values of ethics, integrity and patriotism but have been identified for their sterling anti-corruption disposition in their workplace.”

In his goodwill message at the Summit, the President of the Nigerian Senate, Senator Ahmed Lawan, who was represented by Senator Michael Nnachi, commended the ICPC and the Office of the Secretary to the Government of the Federation for “bringing stakeholders together for the third year running to proffer solution to address the menace of corruption in the public sector.”

“We cannot divorce corruption from high cost of governance. It has been observed that weaknesses in public institutions and agencies of government are often attributed to corrupt practices and other vices. Diminishing corruption in the public sector is therefore crucial to the delivery of government programmes and services to meet the 2030 Sustainable Development Goals (SDGs), check insecurity and ensure transformation,” the Senate President added.

Also, in his goodwill message, the Chief Justice of Nigeria (CJN), Justice Ibrahim Tanko Muhammad, described the theme for this year’s event as apt and strategic, in view of the perception of the country vis-a-vis its various institutions and agencies by the international community.

The CJN noted that the delays associated with the trial of criminal cases by the courts, particularly those relating to corruption and financial crimes, caused the apex court to set up a Corruption and Financial Crimes Cases Trial Monitoring Committee in 2018. Justice Tanko added that the Committee has been working closely with other heads of court across the country to bring about speedy dispensation of corruption cases. “Even with the devastating impact of Covid-19 pandemic, in virtually the whole of 2020 and a better part of 2021, a total of 746 cases were dispensed with,” he emphasized.