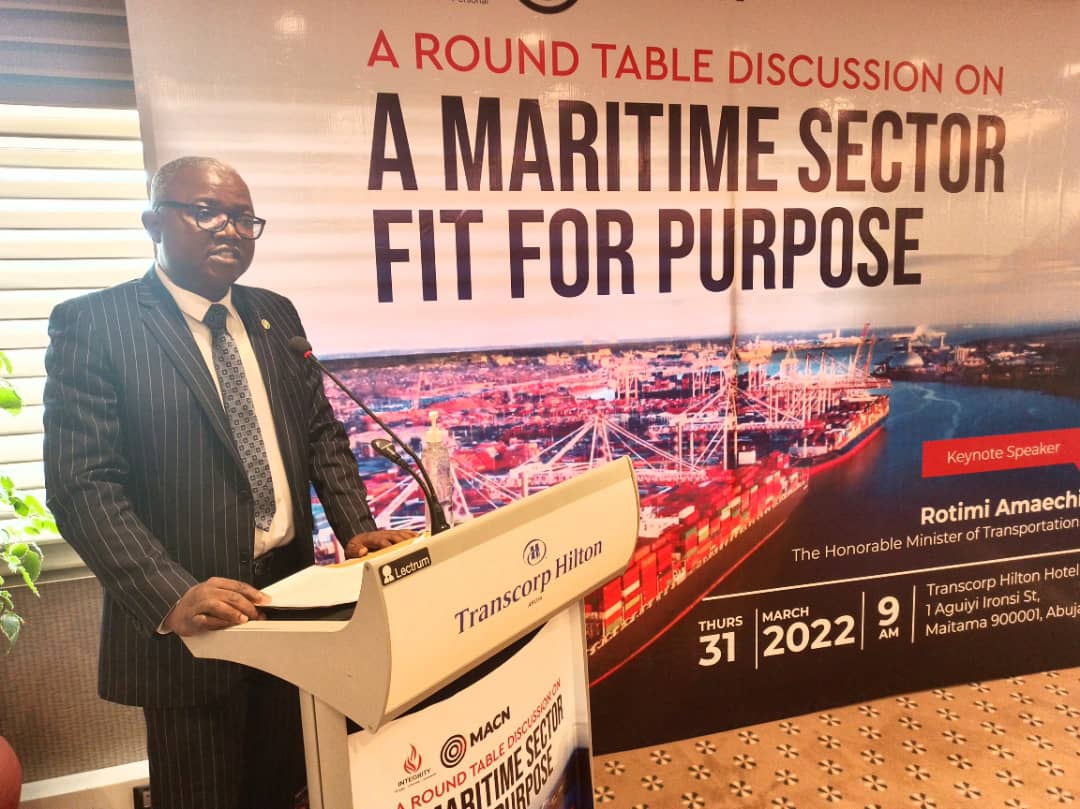 The Hon. Chairman of ICPC, Prof. Bolaji Owasanoye, SAN, made this known in his keynote address at the “Maritime Sector Fit-For-Purpose” roundtable discussion organized by Convention on Business Integrity (CBI) in collaboration with the Maritime Anti-Corruption Network (MACN) in Abujarecently.

Speaking at the event, the Hon. Chairman represented by Mr. Jimoh Sulahiman, Assistant Director, ICPC, said that the Commission complements the “Ease of Doing Business” policy of the Federal Government of Nigeria through its preventive intervention mechanisms, in operation in the port sector agencies.

Professor Owasanoye stated that ICPC also engineered stronger collaboration and support for reforms and transparency among agencies operating at the ports and their stakeholders.

“With our input, enforcement against infractions of rules is now prioritized by officials/agencies. We have supported compliance monitoring activities in the ports … The task teams in both Lagos and Port-Harcourt ports have recorded so much successes that MACN and other relevant stakeholders can testify to,” the Chairman said.

He therefore charged all stakeholders in the maritime sector to help curb corrupt practices in the sector. “We will be unrelenting in facilitating the promotion and strict enforcement of the harmonized Standard Operating Procedures (SOPs), Port Service Support Portal (PSSP) and Nigeria Port Process Manual (NPPM),” he stated.

In his keynote address, the Hon. Minister of Transportation, Rt. Hon. Chibuike Amaechi, represented by the Ministry’s Permanent Secretary, Dr. Magdalene Ajani, noted that the maritime sector had achieved several successes given government-led reforms in infrastructure, policy and operations.

He explained that ports administration at present was such that port users were able to demand, track, and ensure greatercompliance with the SOPs by government agencies.

According to him, “This has led to reduction in the incidences of corrupt demands as it relates to vessel clearance, as well as strengthened the capacity of Government to establish compliance systems and as well collaborate with the private sectors and civil societies to improve trade flows and enhance the ease of doing business.”

The Hon. Minister further implored the participants to come up with strategies on the best methods for mainstreaming the compliance function into agencies and offer solutions to anticipated constraints, including how to ensure that whatever was proposed was appropriate, relevant and realistic within the operational framework of the port agencies.

In his goodwill message, the Managing Director of the Nigerian Ports Authority (NPA), Mr. Mohammed Bello Koko, represented by Mr. Kabir Edward, GM Abuja Liaison Office, NPA, affirmed that the theme for the roundtable discussion, “A Maritime Fit-For-Purpose,” captured what should constitute the overriding objective as stakeholders in the global maritime value chain.

According to him, the discussion will give them ideas to fight actions that make the maritime sector unfit for purpose because ports, being the entry of national economies, play a pivotal role in determining the nation’s economy.

Earlier, in her welcome address, Mrs. Jane Onwumere, Head, Technical Unit on Governance and Anti-Corruption Reforms (TUGAR), expressed her appreciation to the CBI and the MACN for organizing the event which sought to develop strategies to sustain the successes achieved in the Ease of Doing Business and ensure that Nigeria reclaimed its place globally.

She recalled that the MACN, TUGAR in collaboration with ICPC, and Bureau of Public Procurement (BPP) with the support from United Nations Development Programme (UNDP) carried out a Corruption Risk Assessment (CRA) in the six Nigerian seaports (Lagos – Apapa & Tincan, Port Harcourt, Onne, Calabar and Warri) to strengthen preventive mechanisms by identifying areas that were prone to corruption, profferedrecommendations and jointly with the stakeholders developedintegrity plans to strengthen transparency and accountability towards enhanced service delivery.