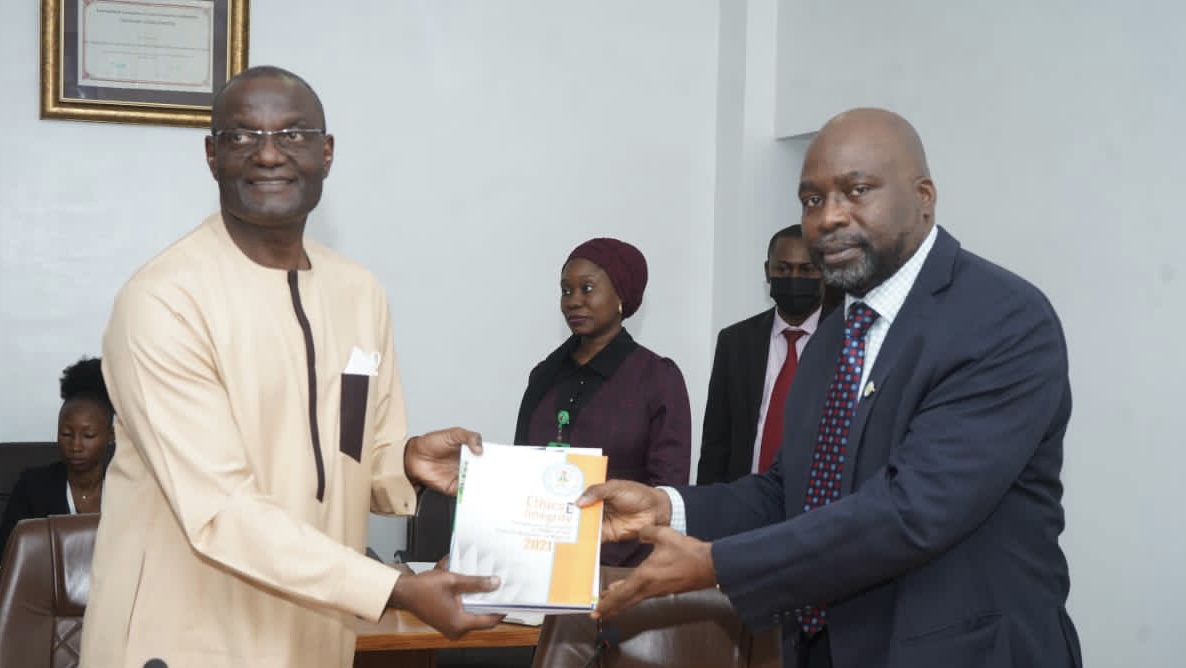 ICPC Reiterates Commitment to Tackle Corruption at the Ports

The Independent Corrupt Practices and Other Related Offences Commission (ICPC) has reiterated its commitment to tackle corruption at the Nigerian Ports.

The ICPC Chairman, Professor Bolaji Owasanoye, SAN disclosed this when the Executive Secretary and CEO of the Nigerian Shippers Council (NSC), Rt. Hon. Emmanuel Jime, paid him a courtesy visit in the Commission recently.

During the visit, Professor Owasanoye noted that while Nigeria had the capability to realize and sustain a robust economy, its biggest challenge was its inability to block economic leakages.

He said that Nigeria’s economy is bleeding from the high level of corruption and corrupt activities taking place in the ports, which led to reputational damage of the country, adding that foreign investors no longer have interest in investing in the country rather prefer investing in neighboring countries.

The ICPC boss pledged the continued support of the Commission in fighting corruption at the ports through the joint efforts of the Ports Standing Task Team, but explained the inability to dedicate officers to be stationed at the ports full-time as the Commission does not have sufficient officers and it may end up being counter-productive on the long run.

He explained that the Commission is also in partnership with other agencies of government such as FRSC, DSS, etc, to prevent corrupt activities and promote accountability and transparency in their processes.

“Statutorily, we should assist but realistically, we are not able to cope due to limited funding and staffing.”

He therefore maintained that the collaboration of both agencies would be in pragmatic ways and assured of the Commission’s readiness to explore best ways to curb corrupt practices at the Nigerian Ports and other agencies that would need the Commission’s partnership.

Earlier in his address, the Executive Secretary/CEO of the Nigeria Shippers Council, Rt. Hon. Emmanuel Jime, expressed his gratitude to the ICPC for its collaborative support in the fight against corruption at the Ports which has improved the economic growth and development of the country.

Hon. Jime explained that since the adoption of the Nigerian Ports Process Manual (NPPM), a lot has been achieved in the regulation at the Ports including zero tolerance for gratification in cash and souvenirs, reduction of the average vessel demurrage and the average time for resolving complaints, savings of over $6million for the country from reduced demurrage costs, among other achievements.

All of these, he posited, would lead to an improvement in the country’s Ease of Doing Business and Corruption Perception Index rankings.

He however requested for direct attachment of ICPC personnel to the special intervention task force to carry out investigations and other operational activities that would enhance the enforcement drive against corruption at the ports.