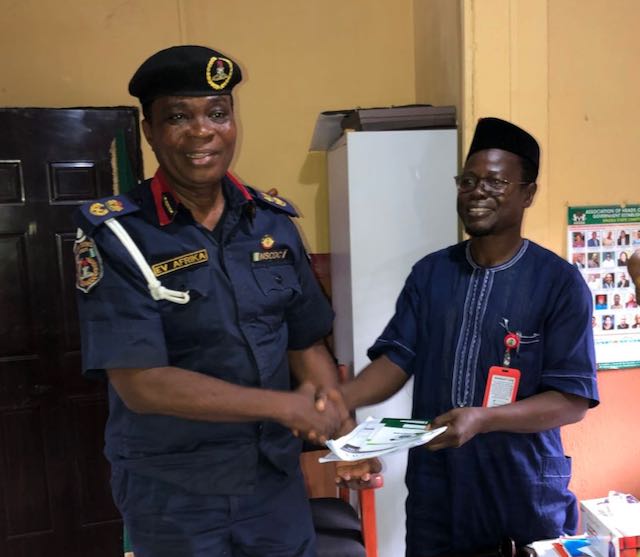 NSCDC to partner with ICPC in Fighting Corruption

The Commandant, Nigeria Security and Civil Defense Corps (NSCDC), Enugu state, Mr. E V Afrika, has expressed the corps’ readiness to partner with the Independent Corrupt Practices and Other Related Offences Commission (ICPC) in the fight against corruption and related offences.

While commending the ICPC team for the visit, he emphasized the importance of joining forces together to tackle the menace of corruption and corrupt practices in all ramifications.

The Commandant further stated that the command was always open to giving the Commission any technical assistance, particularly in the areas of training.

Earlier, in his remark, the Enugu State Office RACC thanked the Commandant for the timely response to the Commission’s request to pay the courtesy call.

While speaking on the tripartite mandate of enforcement, prevention, public education, and enlightenment as contained in section 6 (a-f) of the ICPC Act 2000, Mr. Ebhotemen highlighted some of the achievements recorded by the Commission under the present Board.

He emphasized the need for both organizations to work together, especially in the areas of information gathering and intelligence sharing, and adoption of new techniques in the fight against corruption and all other forms of crimes in the state.

Ebhotemen solicited the cooperation of the Commandant and his men to support the Commission, majorly in the areas of provision of NSCDC armed men to provide security cover for personnel and facilities of the Commission, training, and other operations of ICPC in the state.