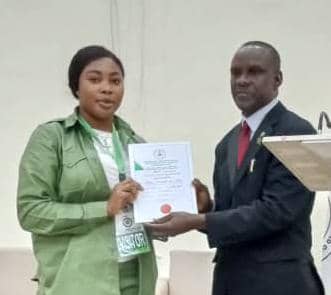 The Independent Corrupt Practices and Other Related Offences Commission (ICPC) has charged outgoing members of the National Youth Service Corps (NYSC) in the country to remain steadfast in the war against corruption.

The Director, Public Enlightenment and Education, ICPC, Mr. Muhammed Ashiru Baba, fsi, gave the charge at the passing out ceremony of members of the NYSC Anti-Corruption CDS group FCT chapter in Abuja recently.

He stressed the need for the corps members to imbibe and exhibit high moral values in their everyday activities, stressing that the chances of winning the anti-corruption war would be high if they continue to practice integrity and sound moral values.

Mr. Baba went further to explain some of the ills associated with corruption and encouraged them to keep the Nigerian flag flying and shun all aspects of corrupt practices as it could tarnish their image and that of the country.

“Don’t let corruption affect your dreams in life, keep the flag flying. The fight against corruption is a divinely ordained responsibility”, he said.

He commended the outgoing corps members for the service they rendered and said their contributions were well appreciated.

Thereafter, an Assistant Director with the department, Mr. John Odey, gave a presentation on the National Ethics and Integrity Policy (NEIP) during which he urged the NYSC members to make use of the fundamental rules of the policy as premised on the seven core values of Human Dignity, Voice and Participation, Patriotism, Personal Responsibility, Integrity, National Unity and Professionalism.

He explained that “ICPC, as a strategic leadership organisation with deliberate intention, worked with the National Orientation Agency (NOA) and Office of the Secretary to the Government of the Federation (OSGF) to make the NEIP a lifelong policy. It was derived from the 1999 Constitution and from the code of ethics of professional bodies.” He added that the NEIP is to be used to help save the country from an erosion of ethics and collapse of values.

The highlight of the occasion was the presentation of certificates to the outgoing corps members to appreciate their service in the war against corruption.