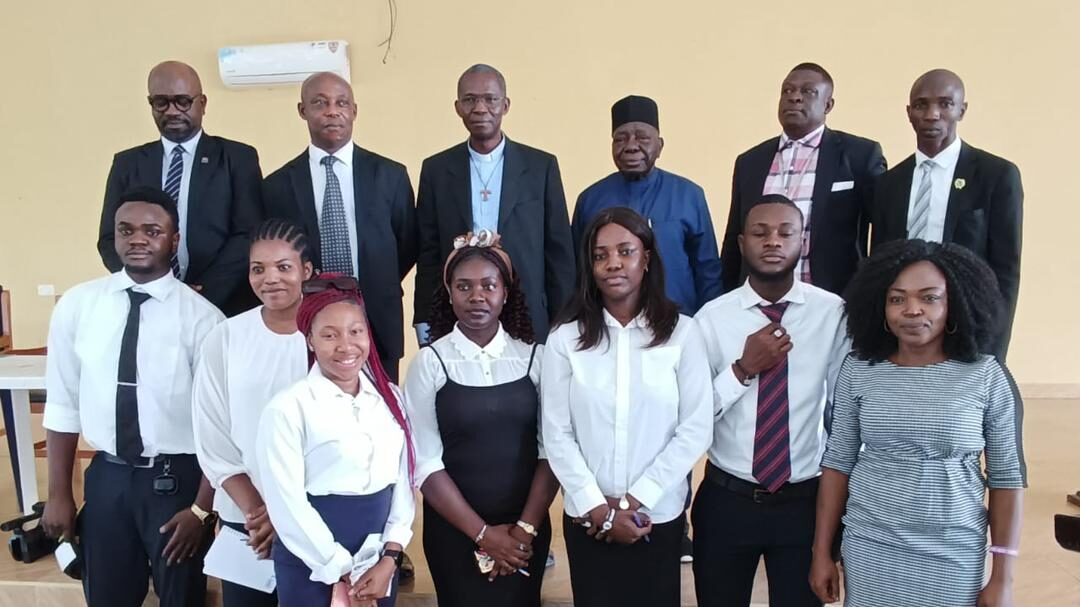 ICPC Empowers Veritas University in the Fight Against Corruption

Students of Veritas University have been charged to identify and devise strategies to mitigate corrupt practices in their institution using the platform of the Students Anti-Corruption Vanguard and by reporting offences to the Independent Corrupt Practices and Other Related Offences Commission (ICPC).

This remark was made by an Assistant Director of ICPC, Mr. Okor Odey during the inauguration of the Students Anti-Corruption Vanguard (SAV) by the Commission at Veritas University in Bwari, Abuja, recently.

Mr. Odey stated that the purpose of the Commission’s visit was to sensitize the students as well as the University community on corruption and to inaugurate a branch of the Students Anti-corruption Vanguard (SAV) in the school which will be the lookout in identifying corrupt practices.

“The Vanguard will give the students and every other member of the university community a voice to interface with the school, the Commission and the rest of the world on issues of anti-corruption”, he said.

In his paper titled, “Role of the Students Anti-Corruption Vanguard in the Fight against Corruption” Mr. Mfon Umoh of the ICPC Education Division, highlighted various forms of corruption in schools and the need to use the vanguard as an instrument to fight them.

Also speaking at the event, the Vice Chancellor, who was represented by the Dean of Students Affairs, Rev. Fr. Michael-Mary Akaigwe thanked ICPC for its efforts towards the inauguration of the SAV in the school saying that the university has, as one of its goals, the inculcation of the virtue of living in truth as exemplified in its name.

“We appreciate your presence. The very name “Veritas” means truth and so is infused in the university to seek the truth, inculcate it, live and propagate it such that corruption will be fought from within.”

He added that the school authority will do everything possible to promote the Vanguard so that the university would achieve its set objectives.

Earlier, during an interview at the university’s radio station, Mr. Odey called on the students not to keep quiet but report all forms of corruption especially the issue of sexual harassment.

“We all know that because of stigmatisation, many people fear to report such incidents. We want to encourage the students to report promptly any instance of sexual harassment, sexual demands”.