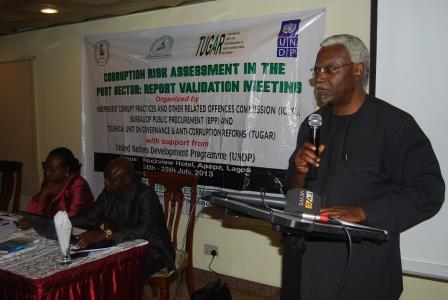 The Independent Corrupt Practices and Other Related Offences Commission (ICPC) will henceforth prosecute any foreigner who offers bribe at sea ports to facilitate import or export of goods into the country.

This was disclosed by the Chairman of the Commission, Mr Ekpo Nta, at the Report Validation Meeting of the Corruption Risk Assessment (CRA) in Nigerian Ports recently held in Lagos.

Mr Nta said that any person who offers or solicits for bribe to facilitate any process in the seaports or has information of such and fails to report to the ICPC is liable to be prosecuted.

“The outcome of today`s meeting will be a defining paradigm for the way business is carried out in our seaports because that outcome will be built on the commitment of every stakeholder present to streamline and strengthen activities in the ports sector which indeed is the gateway to our national economy” he said.

While presenting the final report of the exercise, consultants of the United Nations Development Programme (UNDP), Mr Constantine Palicarsky and Chibuzo Ekwekwo, revealed that it takes more than 120 signatures for a consignment to be cleared in the Nigerian seaports.

This is in addition to other problems identified in the report such as systemic bottlenecks, political, social and technological factors such as ineffective checks and balances, limited ports facilities and high tariffs. they added.

The Corruption Risk Assessment Project is a System Study and Review exercise conducted by the ICPC and other stakeholders at the instance of the Maritime Anti-Corruption Network (MACN). The pilot exercise which covered six Nigerian ports namely: Lagos (Apapa and Tin Can), Port Harcourt (Port Harcourt and Onne), Calabar and Warri identified Nigeria as one of the countries with corruption-prone systems in the port sector.

It would be recalled that in August 2012, the ICPC and other stakeholders like the Technical Unit on Governance and Anti-Corruption Reforms (TUGAR), Bureau for Public Procurement (BPP), and United Nations Development Programme (UNDP) had announced the commencement of the training of 100 Corruption Risk Assessors (CRAs) drawn from various Millennium Development Goals – related MDAs, Media and Civil Society Organizations.

At that time, the ICPC Chairman, Mr Ekpo Nta, while announcing the kick-off of the project had said “The Corruption Risk Assessment Project (CRA) will bring a valuable dimension to the corruption prevention work of the ICPC. The focus of the CRA project is to identify within organizations operational areas that are vulnerable to corrupt practices, proffer recommendations and jointly develop, with the management of organizations, action plans to strengthen accountability and transparency towards enhanced public service delivery.”

Other stakeholders in the port sector who contributed to drafting the final report through deliberations were Nigeria Customs Service, represented by the its Port Comptroller, Nigerian Maritime Administration and Safety Agency (NIMASA), Shippers Council, Standard Organization of Nigeria (SON), Freight Forwarders Association of Nigeria and National Agency for Food and Drug Administration and Control (NAFDAC).