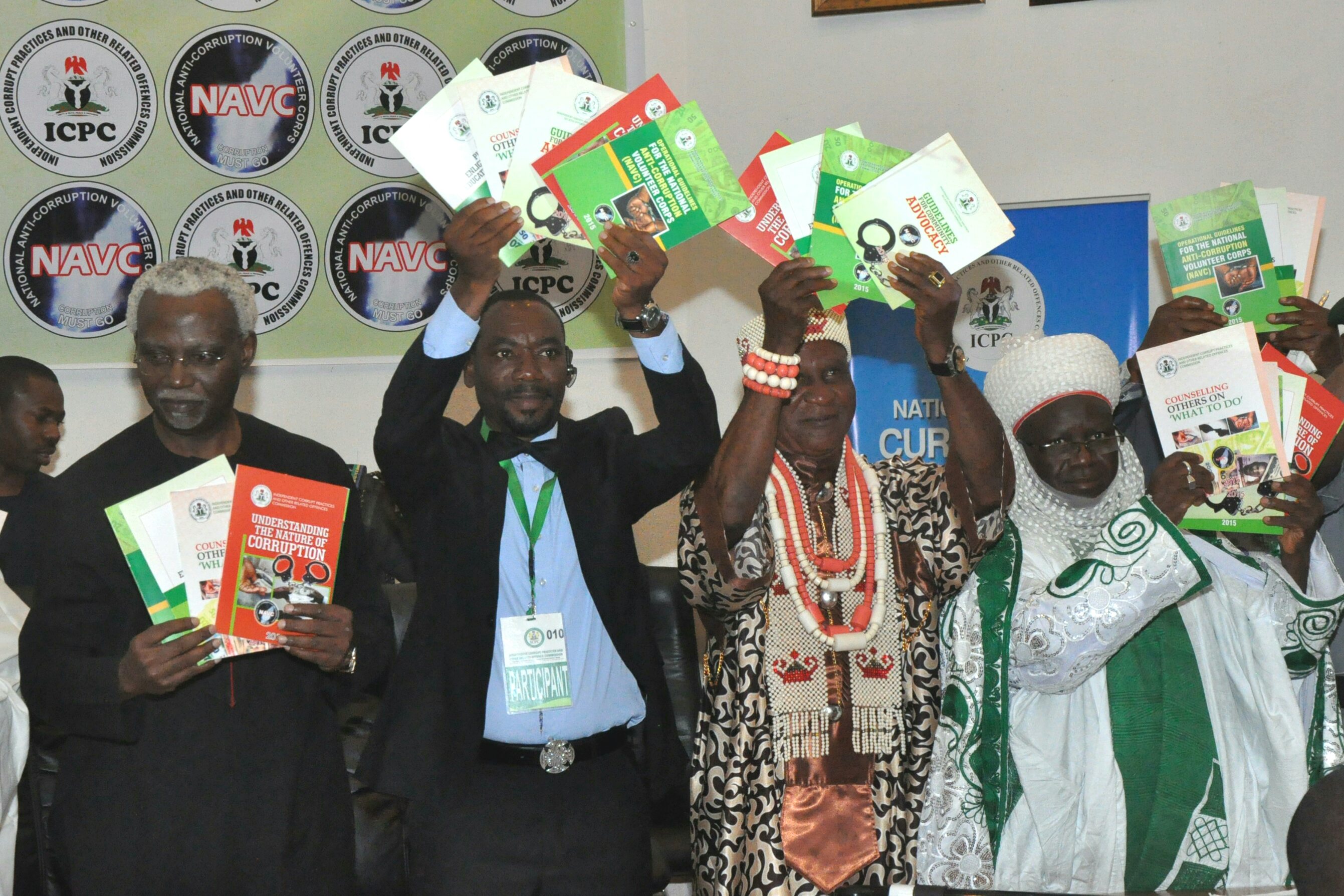 The Independent Corrupt Practices and Other Related Offences Commission (ICPC) has given its National Anti-Corruption Volunteer Corps (NAVC) a new face. NAVC, a prime mass mobilization initiative of the Commission which enlists ordinary citizens as volunteers in the fight against corruption had been subjected to abuse and misapplication of its privileges by some of its members in several states of the federation.

The unveiling of its new operational guidelines and re-branding which took place at the Commission’s headquarters was witnessed by representatives of different law enforcement agencies such as EFCC, the Police, Customs; dignitaries such as traditional rulers and top government officials from various establishments; and  officials of civil society organizations.

Speaking at the event, ICPC Chairman, Mr. Ekpo Nta disclosed that the old NAVC was suspended because having been initially conceived to be a critical mass of civil society whistle-blowers to assist in the fight against corruption, some of its old members had converted it into an extortionist and terror scheme.

He gave an example where a member of the old NAVC was arrested while acting as an escort to a senior military officer to help him circumvent the payment of some airport levies. Mr. Nta also related how a state head of NAVC used to drive about in a convoy of cars which included a pilot car. He added that some of such volunteers had been charged to court.

The ICPC Chairman further explained that ICPC was more interested in behavioural change of citizens which is why it does not “ambush people but spends time to teach them what they should avoid in order not to suffer consequences of wrong-doing.”

In his welcome address, the National Coordinator, NAVC,  and Head of Research and Documentation Unit, ICPC, Mr. Mike Sowe, said that the major problem which led to the suspension of the old NAVC arose due to the fact that a majority of the members were unemployed and therefore started using their position for personal gain.

This error, he said has been corrected in the operational guidelines of the re-branded NAVC and specifically states that members therefore, must be gainfully employed.

In his goodwill message, the representative of the Chairman of the Economic and Financial Crimes Commission (EFCC), Mr. Ibrahim Lamorde, the director of Public Affairs, Mr. Osita Nwajah, EFCC said that NAVC was a very useful tool in the fight against corruption as the mandate of ICPC cannot be achieved by officers of the Commission alone which makes it very important to have mass mobilization of corruption fighters.

Ordinary Ahmed Isah, President/Founder of the popular ” Berekete Family” talkshow on Love FM, Abuja who also attended the event, expressed optimism towards the success in the fight against corruption in Nigeria by the launching and rebranding exercise.

He therefore called on President Muhammadu Buhari to support ICPC so that the Commission could stamp out corruption completely.

The highpoint of the event was the unveiling of the new NAVC operational guidelines and manuals by the Chairman of the Commission, Mr. Ekpo Nta supported by many of the distinguished guests present.

The documents unveiled included the NAVC Operational Guidelines, Guidelines for Community Advocacy, Understanding the Nature of Corruption, Public Enlightenment/Education Strategies and Counseling Others on What To Do (Training Manual).

Mr. Nta also said that soft copies of the documents and membership application forms could be found on the Commission’s website (www.icpc.gov.ng) for free download.