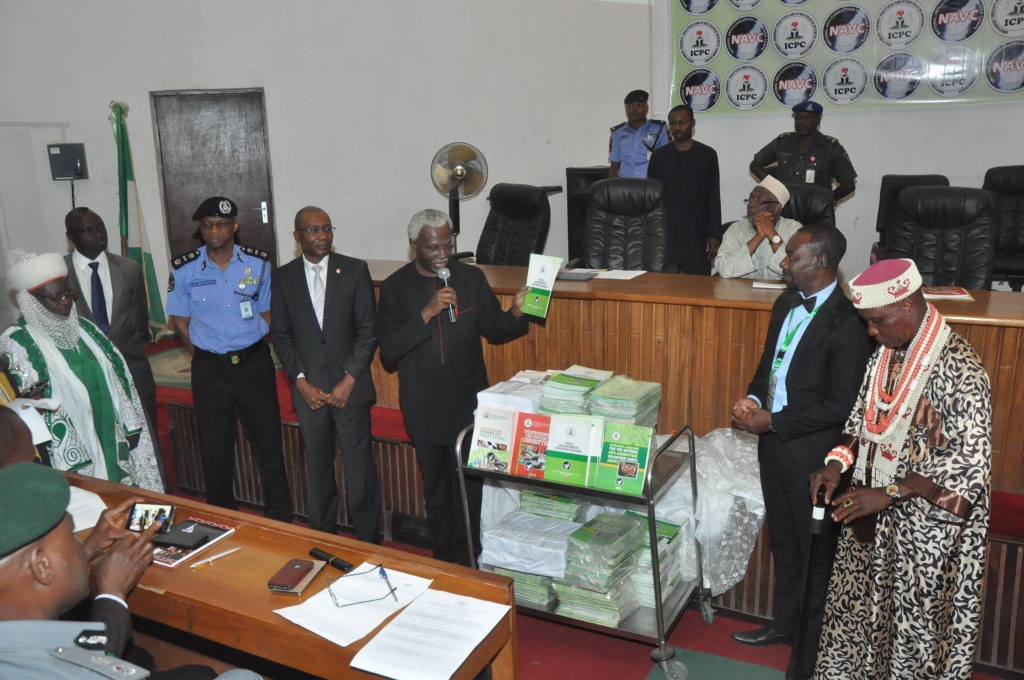 Thursday 29th October 2015 marked a new beginning for the National Anti-Corruption Volunteer Corps (NAVC) as the ICPC Chairman Ekpo Nta supervised its rebranding at the Commission’s headquarters by unveiling the Operational Guidelines and Training Manuals.

The Chairman explained that the operational guidelines are aimed at overcoming identified loopholes while the Training Manuals will equip members with adequate knowledge about corruption and its ramifications. He said the new NAVC will develop a corps of volunteers for community service against corruption, mobilize and educate the citizens on corruption and its ills, and also act as a vanguard for good governance in our society.

Mr Nta emphasised that the NAVC is not a Para-military organisation and warned state Coordinators to desist from militarising activities of the Corps. He advised all interested citizens to register for membership online on the ICPC website, adding that elections into the various positions as contained in the operational guidelines will be conducted after vetting of prospective applicants.

Earlier in his welcome address, the National Coordinator, Mike sowe expressed the hope that there would be fewer crises in the states now that membership is restricted to only citizens who are gainfully employed, with verifiable means of livelihood. He said apart from the operational guidelines, the training manuals include;-Public Enlightenment and Education Strategies, Understanding the nature of Corruption, Guidelines For Community Advocacy and Counselling Others On What To Do.

In his goodwill message, the president of Berekete Family, Ordinary President Ahmed Isa, who was specially invited by the ICPC chairman to be the Guest of Honour, commended the Commission for rebranding the NAVC and for taking the fight against corruption to the grassroots. The Ordinary President was particularly concerned with the plight of pensioners in the country who have been made to undergo untold hardship in the hands of government officials. He urged the ICPC to focus its searchlight on pension matters so that retired government officials can live a peaceful life.

Speaking on behalf of the chairman of the Economic and Financial Crimes Commission, Osita Uwajaren who is the Director of Public Affairs acknowledged the pioneering role ICPC has played in the campaign against corruption in Nigeria. He praised the synergy and working relationship between ICPC and EFCC and pledged the support of his Commission towards the success of the NAVC.

In his vote of thanks, A Board member of the ICPC, Bako Abdullahi, expressed the appreciation of the commission for the large turnout which he noted to be an indication of the passion of participants to fight corruption and make Nigeria a better place.

See more pictures of the event.