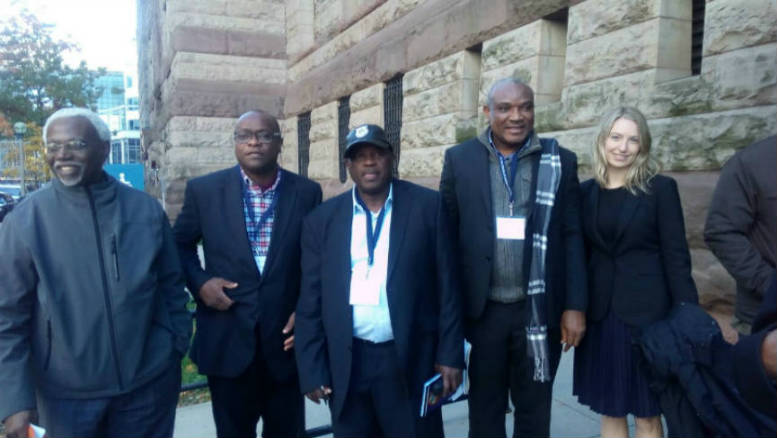 Contrary to recent news reports that he has been sacked by the Federal Government, ICPC boss Ekpo Nta is among some Nigerian government officials that are presently attending a course on Indicators of Development for Justice Officials.  the ICPC boss is attending the course alongside senior officials in the justice sector of the government like the Senior Special Assistant to the President on Prosecution, Chief Okoi Obono-Obla; Chief Judge of the High Court of the FCT, Ishaq Bello; Deputy Inspector General of Police, Investigation and Intelligence; Deputy Commissioner of Police, Legal,Force Headquarters; the CG of Nigerian Prisons Service and Special Assistant to the Vice President on Justice Reform.

The course which is to run from the 30th of October, 2016 to 10th of November, 2016 is taking place at the prestigious Munk School of Global Affairs, University of Toronto, Canada.

The Munk School of Global Affairs (also referred to as the Munk School) at the University of Toronto is an interdisciplinary academic centre with various research and educational programs committed to the field of globalization. It offers master’s degrees in Global Affairs, European, Russian, and Asia-Pacific studies. The school also offers a certificate program in global journalism.

It occupies the historical Devonshire House, a former residential hall of the university’s Trinity College, and in 2012 opened a second location at 315 Bloor Street West (Observatory Site) after an $80 million collective contribution from the Peter and Melanie Munk Foundation, the Government of Canada, and the Government of Ontario.

The School is located in the north and south wings of Devonshire House building on Devonshire Place, which is shared with Trinity College’s John W. Graham Library. In 2012 the Munk School of Global Affairs opened its second location at the Observatory site at 315 Bloor Street West (formerly Admissions and Awards) which houses the offices of the Citizen Lab and the Master of Global Affairs program.

It was founded as the Munk Centre for International Studies in 2000, named after Canadian businessman and philanthropist Peter Munk who made a $6.4 million donation to finance the construction.

The current director is Professor Stephen J. Toope, a noted expert on human rights, and public international law. Previously, he served as the President of the University of British Columbia.

Culled from The Metro Lawyer.