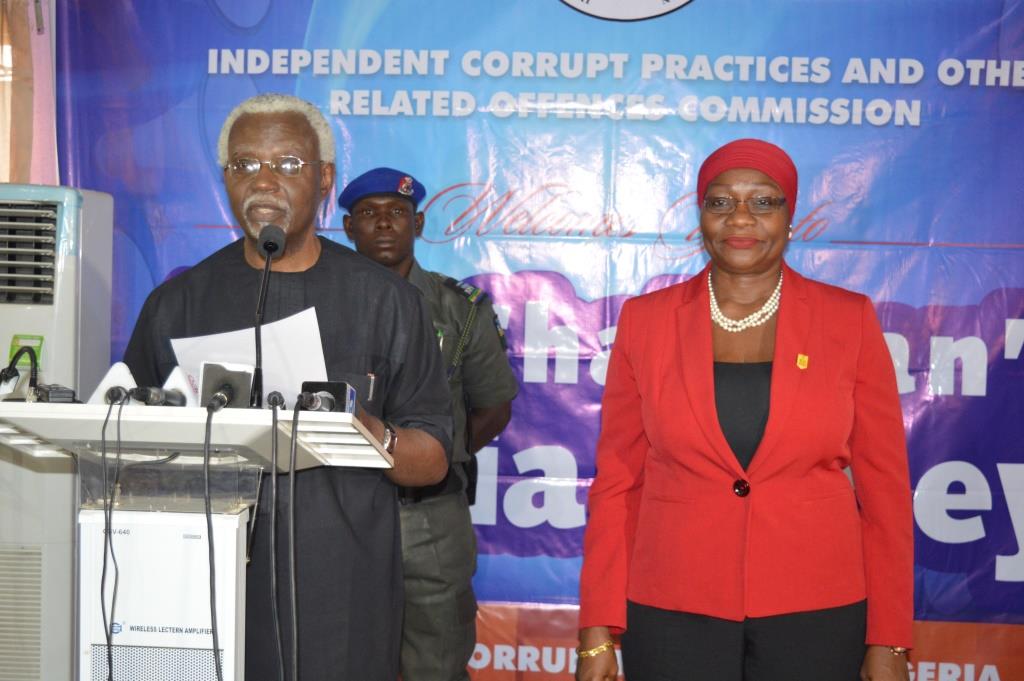 For an improved and robust relationship with the media, the Independent Corrupt Practices and Other Related Offences Commission (ICPC) hosted the cream of Nigerian media at the Commission’s headquarters recently.

Addressing journalists at the event tagged “ICPC Chairman’s Media Parley”, the Chairman of ICPC, Mr. Ekpo Nta said “Corruption is a global and cross-border problem that has far-reaching consequences on nations and societies and Nigeria is not an exception”. He argued that in order to reduce corruption, Nigerians must realise the importance of curbing opportunities that lead to corrupt activities in the society, and that the media had a crucial role to play in this regard.

Nta further said that, although the Commission would continue to bring the full weight of the law against corrupt persons, ICPC would not fail to vigorously pursue public enlightenment through the media, while undertaking systems reform to deliberately and consciously shut the door against illicit activities of corrupt persons.

The ICPC boss revealed that in 2016, the Commission made a recovery of N8.7 billion from multiple sources while a total of 124 vehicles were recovered from officials of Subsidy Reinvestment and Empowerment Program (Sure-P) and the Federal Ministry of Water Resources. Out of the 124 vehicles, 40 had been handed over to the Federal Ministry of Water Resources.

Also in 2016, the Commission filed 70 cases in court, secured 11 convictions and still has 303 on-going cases.

Nta told the journalists that ICPC’s preventive mandate led to collaboration with the United Nations Development Programme (UNDP), Technical Unit on Governance and Anti-corruption Reforms (TUGAR), Nigerian Ports Authority (NPA) and Nigerian Shippers Council and the introduction of various measures to curb corrupt practices in the operations of Nigerians ports.

He added that the Commission had carried out system study and review exercises in several government establishments to put in place integrity measures that would help curb corruption while the number of Ministries Departments and Agencies (MDAs) with Anti-corruption and Transparency Monitoring Units (ACTUs) (a unit that serve as watchdog for ICPC) has risen to 427.

Ethics and Integrity Compliance Score-card was also developed to encourage accountability and transparency in the conduct of business in the public sector, Mr. Nta also revealed.

Besides reeling out the achievements of the Commission in 2016, the Chairman used the opportunity to introduce the Director of Public Enlightenment, Mrs. Rasheedat Okoduwa, mni, as the Spokesperson for the Commission. He encouraged the journalists to always seek clarifications from authentic sources rather than depend on speculations or unverified sources of news.

The Secretary to the Commission, Dr. Elvis Oglafa, who was also at the event said the Media Parley was necessary because “the business of combating corruption is the business of everyone and by everyone”.

Oglafa maintained that the media was viewed as the fourth estate of the realm because of the critical role they play as agents of social justice in the society.

He also said that, the media was saddled with the duty of informing the public of government policies as they affect the society in addition to being “a powerful medium to inspire the general public towards constructive change on a consistent basis”.

In his conclusion, the Secretary to the Commission noted that the significance of ICPC’s parley with the media could not be over-emphasised because “It allows the Media to share in the anti-corruption vision of the Commission through knowledge-sharing”.

In her vote of thanks, the Spokesperson for ICPC and Director of Public Enlightenment, Mrs. Rasheedat Okoduwa, mni, appreciated all the media houses represented for honouring the invitation of the Commission, and added that ICPC looked forward to a robust relationship with the media.