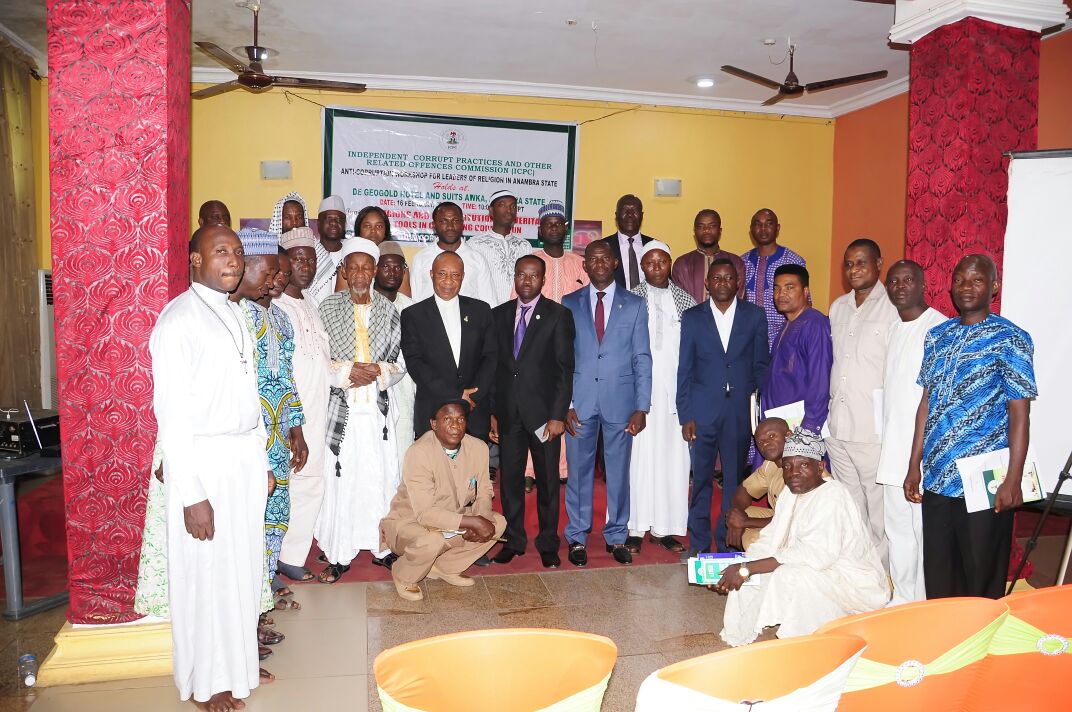 A one-day interactive seminar for religious leaders, which was organized by the Independent Corrupt Practices and Other Related Offences Commission (ICPC), has ended with an appeal to leaders of religious groups to promote integrity, honesty, transparency and accountability in messages to adherents of their various religions.

The Chairman of ICPC, Mr. Ekpo Nta, who made the appeal at the seminar held at Awka, Anambra State, said religious leaders are important channels of carrying the anti-corruption message to the grassroots since most Nigerians profess either the Christian or Islamic religion. The seminar with the theme; “Religion and its Institutions as Veritable Tools in Combating Corruption’ attracted many Christian, Muslim and traditional leaders.

The Chairman who was represented at the occasion by Mr. Kingsley Obi, of Education Department, Abuja disclosed that the interactive forum was aimed at enlightening religious leaders on the provisions of the Corrupt Practices and Other Related Offences Act 2000; and the activities of ICPC; as well as to challenge them to identify their roles in the anti-corruption fight.

He said ICPC adopts a holistic approach to combating corruption, through a combination of the enforcement, prevention and public education strategies while adding that the Commission, in order to achieve its prevention and public enlightenment functions, has embarked on several programmes to mobilize different segments of the society to join in the war against corruption.

Mr. Nta thereafter expressed his optimism that the interactive seminar would stimulate vibrant discourse on the best way forward to win the war against corruption by institutionalizing integrity in all spheres of life.

Also speaking at the occasion, the Chairman of Anambra State Christian Association of Nigeria (CAN), Snr. Apostle Tim Okpala, advised Christian leaders and groups to use “the message of the Cross” to promote a modest and an austere lifestyle that would contradict the crass materialism and extreme economic liberalism of this age, which is responsible for the worsening plight of the poor and the high level of corrupt practices in the country.

In the same vein, the Chief Imam of Yoruba Muslim community of Nnewi, Anambra State, Alhaji Sanusi Abdulrasheed, speaking on the theme of the seminar, said corruption is the dishonest and fraudulent conduct by those in power, typically involving bribery but which can be eradicated through proper government funding of schools, equal treatment of citizens and employment generation.