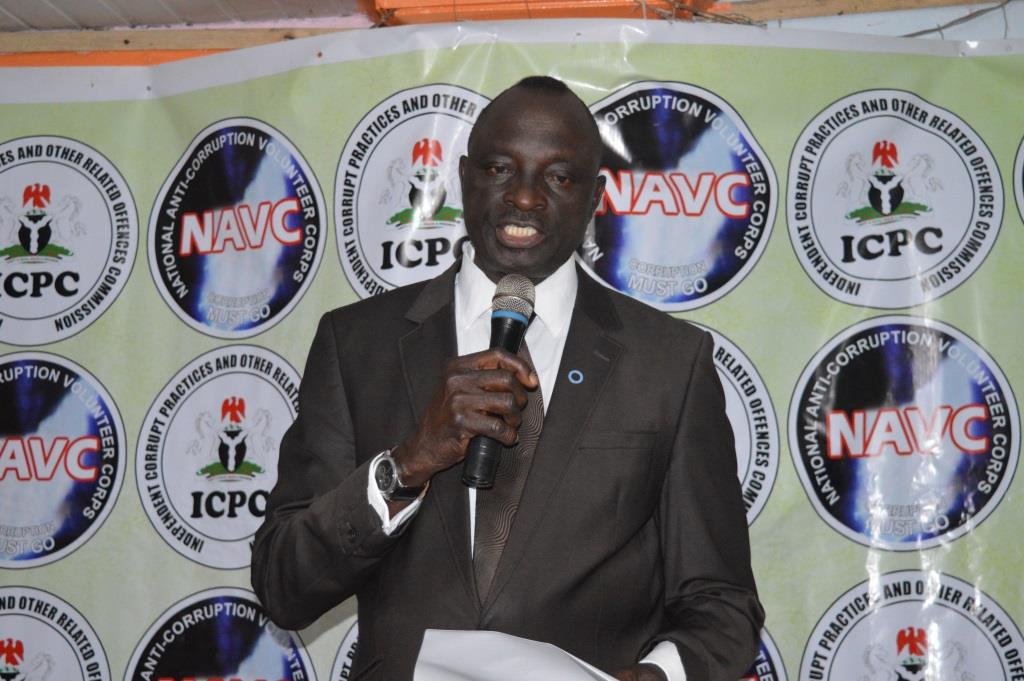 The Independent Corrupt Practices and Other Related Offences Commission (ICPC), has charged officials and members of the newly-re-engineered National Anti-Corruption Volunteer Corps (NAVC) to mobilize and create awareness on the devastating effects of corruption, while enlightening the people on the laws governing the behaviour of public officials and their responsibilities towards citizens.

The charge was given by the NAVC National Coordinator, Mr. Mike Sowe, who represented the Commission during the inauguration ceremonies of officials of NAVC in Makurdi, Owerri and Port-Harcourt cities of Benue, Imo and Rivers states  respectively recently. The inaugurations witnessed crowds of volunteers who came out in their hundreds to join the anti-corruption crusade.

Mr. Sowe called on volunteers of the three state chapters to act as vanguards for the enthronement of good governance in their individual states’ social and political institutions.

He added that part of their duties was to assist ICPC in the dissemination of information on its anti-corruption campaign while also reporting acts of corruption to the Commission.

The National Coordinator advised the volunteers not to deviate from the ideals and core objectives of NAVC, declaring that any of them who engaged in any criminal act would be prosecuted.

“In carrying out your duties and responsibilities, remember that you cannot investigate on your own. All reports must be forwarded to ICPC for investigation and possible prosecution. You must remain above board, as the Commission will not hesitate to prosecute any volunteer that commits any criminal offence,” he warned.

Speaking at the inauguration in Makurdi, Benue State, the Acting Coordinator of Benue State Chapter, Hon Benjamin Nungwa who is also the member representing Kwande Constituency at the Benue State House of Assembly, admonished the volunteers against using NAVC for extortion and impersonation of ICPC operatives.

“No member of NAVC should impersonate ICPC staff. NAVC should rather serve as the eyes and ears of ICPC. We are whistle-blowers and watchdogs, our job is to assist by reporting all corruption cases to ICPC,” the Honourable Member cautioned.

Other volunteers who spoke at the events in Imo and Rivers states revealed that even though there were no material or financial benefits attached to the duties of the members of the Corps, they were joining it because of their passion for a corruption-free Nigeria. They also pledged to carry out their responsibilities with commitment and dedication according to the Corps’ guidelines.

Also speaking in Owerri at the inauguration of the Imo State Chapter, the Coordinator of Abia State Chapter, Rev. Blessed U. Amalambu, cautioned the new volunteers to guard against acts that led to the disbandment of the Corps in the first place.

It should be recalled that NAVC was initiated in 2008 by ICPC to provide a platform for ordinary Nigerian citizen volunteers to get involved personally and actively in the anti-corruption fight.

After its inception, the Corps was inaugurated in most states of the Federation, with each chapter headed by a Coordinator. All state chapters were under the supervision of a National Coordinator at the ICPC headquarters.

As NAVC gained popularity across the country, some volunteers deviated completely from the principles of the Corps and resorted to arrests and interrogation of citizens, while some even set up detention centres.

In view of these abuses, the Commission in 2014 ordered for the suspension of the activities of the Corps nationwide in order to restore its ideals and noble objectives as well as maintain the Commission’s integrity.

In 2015, NAVC was rebranded which led to the dissolution of all existing structures in all states of the Federation.

The new officials for the three state chapters who were inaugurated were elected in conformity with the new operational guidelines after their vetting as prospective members.