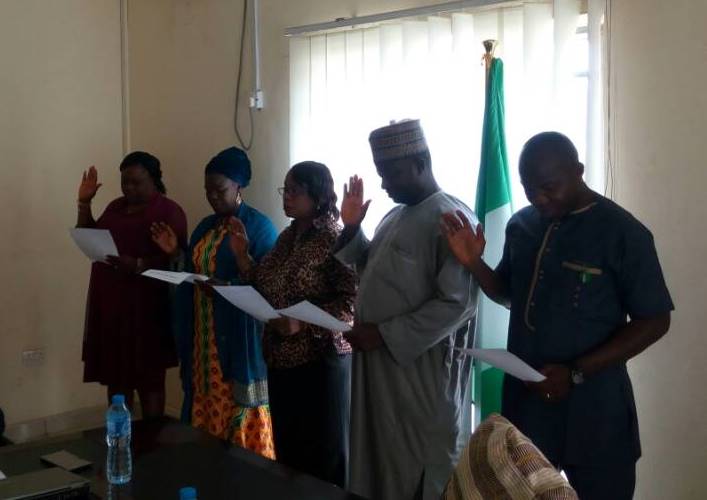 In compliance with the Federal Government’s directive on establishing Anti-Corruption and Transparency Units (ACTU) in all Ministries, Departments and Agencies (MDAs), the National Automotive Design and Development Council (NADDC) has officially inaugurated and inducted its ACTU in Abuja recently.

Speaking at the event, Director-General of the Council, Mr. Janani Aliyu who was represented by Mr. W. K. Odetoro, Director Infrastructures, explained that the inauguration came at the right time “because corruption has become endemic in our country which requires a synergy to be created by the National Automotive Design and Development Council to strategize ways of preventing corruption in the different departments under the council”.

In his opening remarks, Mr. Aliyu outlined some functions of the Council to include: protection of assets and infrastructures as well as the protection of lives, investment and properties, adding that, since ACTU was backed by standing laws established to fight corruption at all levels, it was a good step in the right direction for it to be established in the Council.

While  advising the  newly inaugurated  members  of the Unit, who he said were lucky and carefully selected based on their track record, the DG charged them to be committed in discharging their duties and show good example because all eyes would be on them.

Accordingly, he pleaded with members of staff to co-operate with the ACTU team and also urged them to be firm and fair in their dealings while promising to support them whenever the need arose.

Mr. Justice Kuatsea who represented the Acting Chairman of the Independent Corrupt Practice and Other Related Commission (ICPC) Hon. Bako Abdullahi, in his goodwill message, commended the management, members of the newly constituted ACTU and other officials who contributed in various ways in ensuring the actualization of the event.

The ICPC boss said, “It is in line with the directive of establishing ACTUs in MDAs from the office of the Head of Civil Service of the Federation, that ACTU is being set up today” and that it could not have come at a better time.

He said ACTUs were the eyes of ICPC and at the same time instruments of tackling corruption in public institutions, stressing that corruption was an infection which should be kept at bay.

His words, “corruption as we all know is a major obstacle in realizing the economic growth and infrastructural development of Nigeria, where time-honoured values of honesty, hard work, selflessness and contentment in service have become supplanted by greed and outright disregard for due process”.

He explained further that ICPC recognized NADDC as an important agency of government charged with the mandate of ensuring the survival and growth of the Nigerian Automotive Industry, using available human and material resources.

The Acting Chairman continued that NADDC has a key role to play in the country’s national development hence the need to promote at all times the tenets of transparency and accountability in the organization.

He advised the ACTU members to be responsible and diligent in the discharge of their duties, saying “Your goal should remain the achievement of total success in your assignment so that in end, you would have contributed a great measure in the Council”.

Two papers were delivered at the occasion; the first one titled “ACTU Standing Order and Operational Guidelines” was by Mr. Justin Kuatsea, Head ACTU Unit, Corruption Monitoring and Evaluation Department (CMED) of ICPC, while the second paper “Preliminary Investigation” was delivered by Mr. Abdullahi Tanko, of CMED, who spoke on the terms and terminologies of investigation. He advised that, no ACTU member should handle petitions alone without recourse to other members.

The oath of allegiance was administered on all members of the Unit by Barr. Adebimpe Abodurin of  ICPC. The newly inaugurated members are: Mrs. Susan Bison Taiwo (Chairman), Mr. Soweikumo Dakolo (Secretary), others are Mrs. S.I. Amodu, Barr. A.T. Daniel, Mr. Sulaiman Meduk.