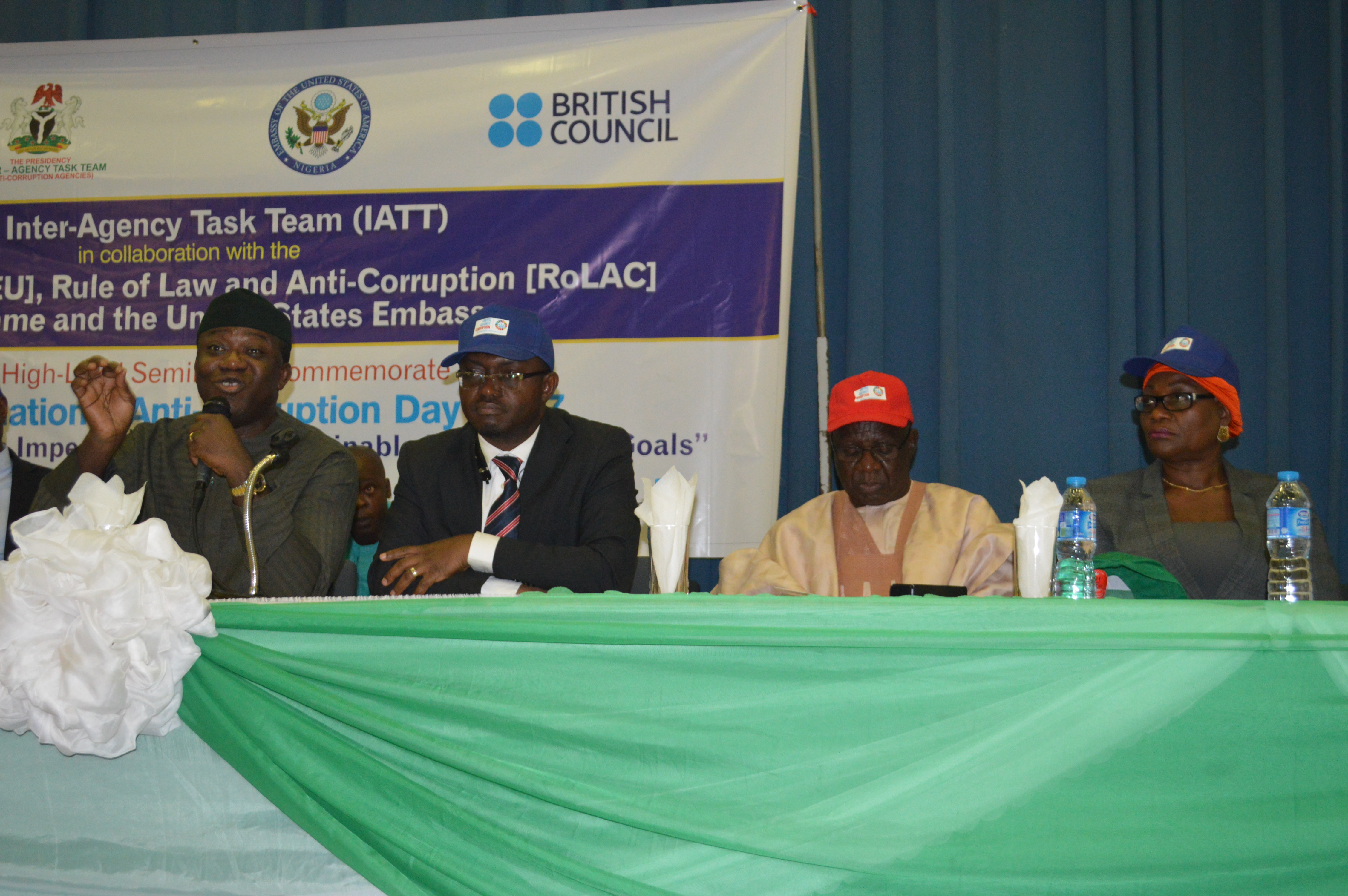 The Vice President of the Federal Republic of Nigeria, Professor Yemi Osinbajo, has stated that there has been an increase in the prosecution of corruption cases by the Independent Corrupt Practices and Other Related Offences Commission (ICPC) and the Economic and Financial Crimes Commission (EFCC) in the last two years.

He attributed the increase in prosecution by the two agencies to the resolve of the President Muhammadu Buhari’s administration to fight and reduce corruption to the barest minimum.

The Vice President who spoke through his adviser on Rule of Law and Anti-Corruption (RoLAC), Akingbolahan Adeniran, made the statement in his keynote address to mark the 2017 International Anti-Corruption Day held recently in Abuja.

Professor Osinbajo noted that the present administration has achieved a lot in the fight against corruption by focusing on prevention, enforcement, public engagement and asset recovery.

He also said that the Federal Executive Council has recently adopted the National Anti-Corruption Strategy with five specific objectives.

” The first specific objective of this document is to promote and improve legal policy and regulatory environment for the fight against corruption; the second is to encourage and improve socio-cultural and political environment for transparency, accountability and integrity; the third specific objective is to provide incentives for sustainability in the fight against corruption; fourth, to improve the operational capacities  of   key anti-corruption institutions and initiatives; and the fifth specific objective is to achieve the presidential commitment on asset recovery, transparency and accountability in management of public resources,” the Vice President explained.

Also speaking at the event, Project Coordinator, United Nations Office on Drugs and Crime (UNODC), Polleak OK Serei, in a message declared that corruption has a catastrophic impact on societies. He added that it stifles opportunities, denying vulnerable people access to infrastructure, and condemns them to lives of inequality and inequity.

OK Serei stressed that “if people are to be removed from poverty and economic growth promoted, the world must stand united against corruption. This means rejecting corruption and embracing accountability, transparency and good governance.”

The ceremony also featured panel discussions, and in one of such discussions focusing on “Recovering Proceeds of Crime for Sustainable Development – Keeping Track of Recovered Assets,” ICPC spokesperson and Commissioner, Public Enlightenment Department, Mrs. Rasheedat A. Okoduwa, mni, said that Sections 37 to 45 of ICPC law gives the Commission power to seize and also to take custody of movable and immovable assets.

She added that by 2013, ICPC had set up a full fledged unit named Asset Tracing, Recovery and Management (ATRM), to take charge of assets recovery and management.

Earlier in his welcome address, the Chairman Inter-Agency Task Team (IATT), Dr. Kayode Fayemi, Honourable Minister of Mines and Steel Development suggested that for the fight against corruption to succeed, Nigerians must say no to impunity and eliminate the syndrome of sacred cows.

“Laws must be effectively and efficiently implemented and dissuasive sanctions imposed; our emphasis must be on tackling corruption from the roots and closing the doors to illicit activities before they happen. This would preserve the integrity of our systems and save us valuable resources for sustainable development.” He added.