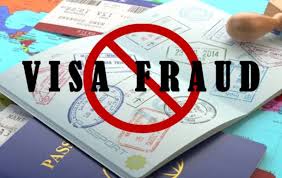 The Independent Corrupt Practices and Other Related Offences Commission, ICPC, has secured conviction against another visa racketeer one Mr. Giwa Sulaimon Ishola for forgery and making false statements.

The Commission had filed a 3-count charge before Hon. Justice S. O. Solebo of an Ikeja High Court sitting in Ikeja, Lagos state against the convict on allegations bordering on providing misleading information to the United States of America (USA) consulate in Lagos with the intent of procuring a visa which contravened Section 17(1)(c) of the Corrupt Practices and Other Related Offences Act, 2000 and Section 516 of the Criminal Code Act Cap C38 Laws of the Federation of Nigeria, 2004, respectively.

Giwa was also accused of making false statements to officers of the Commission averring that the documents submitted to the Consulate were genuine when they were not which is contrary to Section 25 of the ICPC law.

Trouble started for Giwa when ICPC received intelligence that he had submitted a visa application to the USA consulate with misleading and fraudulent documents. On the set day for further interview on his application, he was arrested by operatives of ICPC and the following documents were retrieved from him:  a United Bank for Africa (UBA) letter conveying approval for his annual leave; a Guaranty Trust Bank (GTB) statement of account.

Further investigations revealed that the convict was not a staff of UBA as claimed and that the content of the statement of account he had was not a true representation of his account with GTB and therefore had been falsified.

It was also discovered that the visas for United Kingdom, Republic of Benin, Republic of Togo and Ghana contained in his international passport were fake.

The convict proposed a plea bargain upon which the prosecution filed a three-count amended charge indicating a plea bargain and sentence agreement which was executed by both parties. Consequently, the convict pleaded guilty to the charges when they were read to him.

The trial judge convicted Giwa on his plea of guilt and sentenced him to pay a fine of Fifty Thousand Naira only on each count in lieu of custodial sentence.

The defendant was also made to undertake to be of good behaviour for a period of one year and to execute a bond to this effect with the High Court Registry in the sum of Three Hundred Thousand Naira (300, 000.00) to be forfeited should he breach the terms of same. Failure upon which shall result in his imprisonment for a period of one year.

It may be recalled that in recent years, ICPC has secured convictions against many visa racketeers which has received commendations from several foreign embassies in Nigeria.