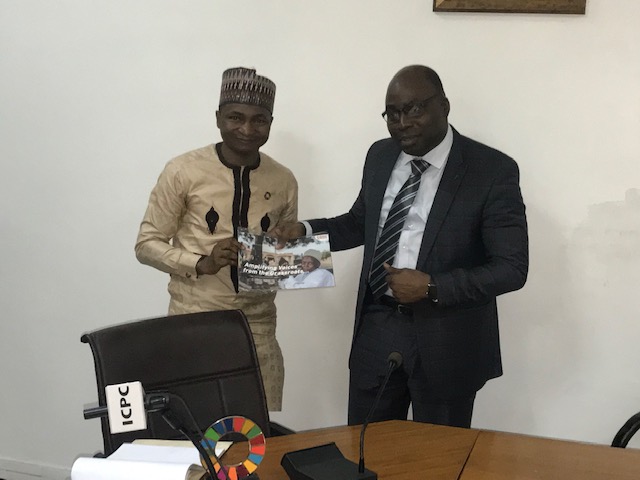 ICPC and CODE to partner against Corruption

ICPC’s quest for a vibrant and effective young force in its campaign against corruption may receive a boost as a non-governmental organisation, Connected Development (CODE), has offered to partner with the Commission to mobilize youths in tertiary institutions against corruption in Nigeria.

CODE, during a courtesy visit to the Chairman of the Commission, Prof. Bolaji Owasanoye, at the Commission’s headquarters recently has also offered to help ICPC in its Constituency Projects Tracking initiative to ensure quality project delivery to the citizens of Nigeria.

The Chief Executive of the organisation, Mr. Hamzat Lawal, who led several other members of the organisation and spoke during the visit, said that they wanted collaboration with the Commission on youth mobilization against corruption in university campuses and on the just-launched Constituency Projects Tracking initiative.

Mr. Lawal said that his organisation was proud of the Commission’s achievements so far in the anti-graft war, stating that CODE was also seeking the partnership in order to monitor the financial activities of local governments for accountability and transparency in the handling of funds released by the Federal Government.

The CODE boss also explained that his organisation strengthened local communities by creating platforms for dialogue, enabling informed debate, and building capacities of citizens on how to hold their government accountable through FollowTheMoney initiative.

He also revealed that his organisation was in the process of touring university campuses to reach out to students, enlighten them on anti-corruption, and on the FollowtheMoney initiative.

In his response, Professor Owasanoye, commended the group for all the efforts they put in the anti-graft war to see that Nigeria turned right, stating how he always commended youth-led initiatives and how in its effort to rid the nation corruption, the Commission had always welcomed partnerships with organisation.

The Chairman noted that he was aware of young people’s expectations that people accused of corruption should be grabbed by ICPC and thrown into jail, but he explained that due process must be followed in fighting corruption due to rule of law. He also well urged them to forward reports of corruption from their FollowTheMoney initiative on government-funded projects for further investigation and possible prosecution.