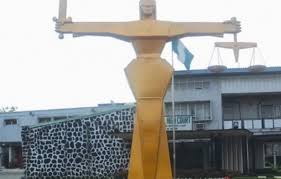 The Independent Corrupt Practices and Other Related Offences Commission, ICPC, has secured the conviction of a former Director-General of the Nigeria Hydrological Services Agency (NIHSA), Mr. John Ayoade Shamonda, for diversion of N603milion.

The convict had earlier been arraigned before Hon. Justice Olukayode Adeniyi of the Federal High Court 14 sitting in Apo, Abuja, on a 10-count charge bordering on knowingly making false statement and virement without approval.

The offences are contrary to and punishable under sections 16; 17(1)(c) and 22(5) of the Corrupt Practices and Other Related Offences Act 2000. The convict had pleaded not guilty to all the charges.

However, during the trial, the prosecution presented 7 witnesses while 26 documents were admitted as exhibits. The court was also told that Shomonda, while being the DG of NIHSA, had written to the then Minister of Water Resources, Mrs. Sarah Ochekpe, requesting for N603million for the rehabilitation and replacement of damaged hydrological equipment across the country following the devastating incident of flood in 2012.

Furthermore, the court was informed that the former DG in disbursing the money, did not follow the ‘procurement plan’ for which the money was released.

Shamonda was also alleged to have purchased two Toyota Prado jeeps and two Hiace buses totaling the sum of N49, 157, 955. 00

In his judgment, Justice Adeniyi found the accused guilty, and convicted him on counts 5, 7, 8, 9 and 10 to I year imprisonment or an option of fine of N50, 000 on each count which sentences are to run concurrently, while he was discharged and acquitted on counts 1, 2, 3, 4 and 6.

While handing down the sentence, Justice Adeniyi said, “This is no doubt a very unfortunate case as all the witnesses had testified that no money was traced to the personal account of the convict. It seems to me that the convict is merely answering to his overzealousness. However, ignorance of the law is no excuse.

“The essence of sentencing is not only to punish the convict but to send a warning signal to the general public”, he concluded.

The offence of virement at S. 22(5) of the Corrupt Practices and Other Related Offences Act 2000 is a strict liability offence for which public officers will be convicted not minding whether the money so diverted was utilised for a legitimate need or not. The conviction sounds a note of warning to all public officers to steer clear of unauthorised virement.

It is important to note that the mischief the section the seeks to curb is the tendency of public officers to embezzle public funds.