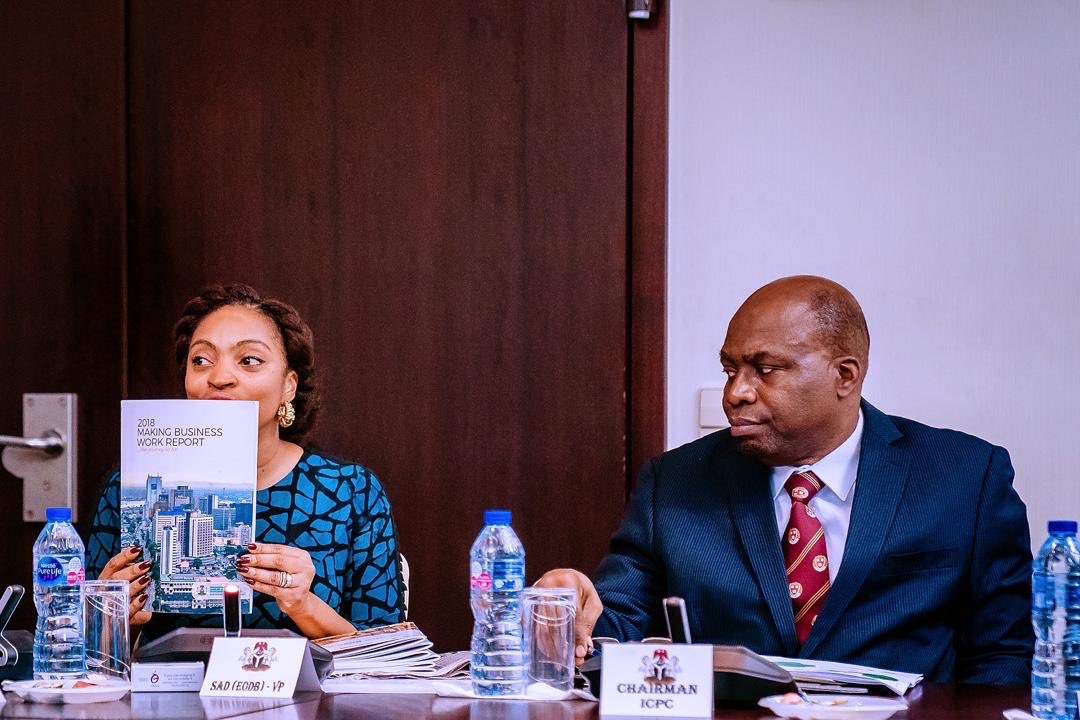 In furtherance of the federal government’s effort at providing an enabling business environment in Nigeria, the Vice President, Federal Republic of Nigeria, Professor Yemi Osinbajo, SAN, has charged the Independent Corrupt Practices and Other Related Offences Commission (ICPC) with the responsibility of enforcing compliance with all resolutions and directives facilitating Ease-of-Doing-Business by concerned stakeholders in the country.

Professor Osinbajo made the charge at the presentation of an interim report on Nigeria’s Ease-of-Doing-Business intervention by the Presidential Enabling Business Environment Council(PEBEC), comprising the Vice President as the Chairman , the Head of Civil Service of the Federation, Ministers and other heads of relevant government agencies, held recently at the State House, Abuja.

The VP expressed his disapproval with reports of alleged corrupt practices by some government officials which frustrate the Ease-of-Doing-Business efforts of government and therefore urged ICPC to deal with corrupt practices damaging the image of the country, especially at its entry and exit points such as airports, seaports and borders.

Speaking also on the merits of the collaboration, the Vice President commended ICPC’s  Ethics compliance mechanism as a potent tool that should be extended in application to ensure all stakeholders’ compliance with the PEBEC prescribed rules for implementation.

During the report presentation session, the PEBEC and ICPC collaboration was launched with a view to curbing corrupt practices and other related offences that have been reported through the REPORTGOV.NG platform set up specifically for that purpose.

In her remarks, the PEBEC Secretary, Dr. Jumoke Oduwole, said she expected that ICPC would take up cases of administrative inadequacies or acts of corruption from the REPORTGOV.NG platform where they exist.

Making his response, the ICPC Chairman, Professor Bolaji Owasanoye, stated that the collaboration had reinforced the commitment of the Commission to what it was doing to diminish corruption in the Public Service. He added that the Commission had so far reviewed operational systems and conducted ethics compliance evaluation  of many MDAs in the country.

It may be recalled that ICPC is currently collaborating with a number of government agencies to diminish corruption in projects that have developmental impact on ordinary Nigerians. These collaborations include that with the National Orientation Agency on the constituency project tracking initiative, the National Social Investment Office on the Social Investment programmes comprising school feeding, conditional cash transfer, N-Power and the Government Enterprise and Empowerment Programme (GEEP) of Trader Moni and Market Moni.