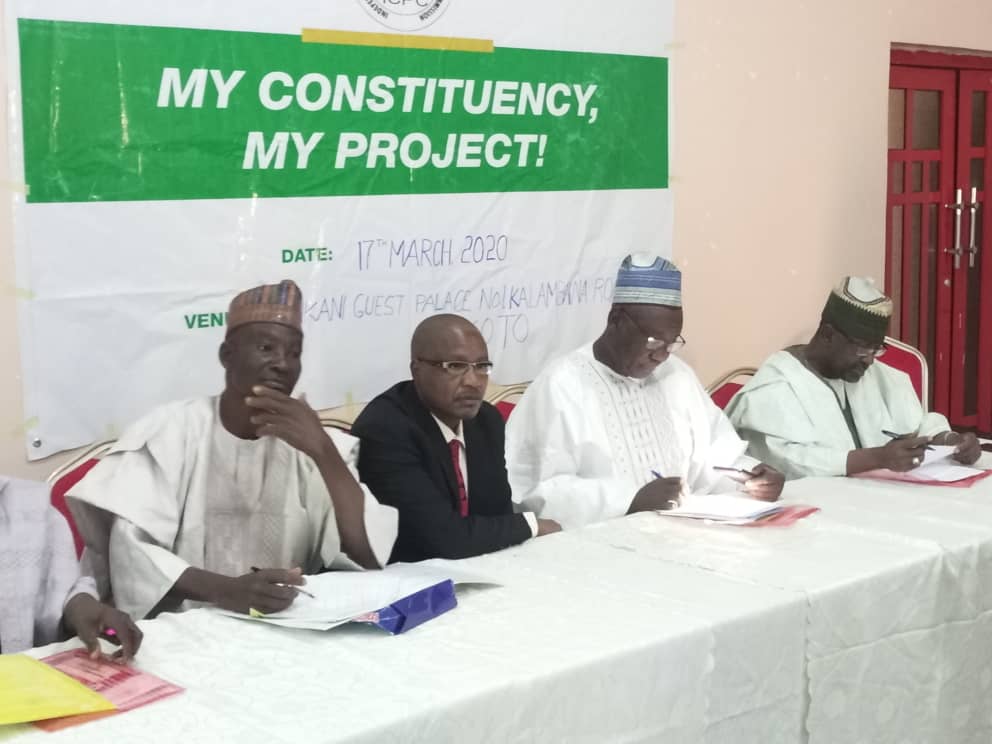 The Speaker Sokoto State House of Assembly, Rt. Hon. Aminu Achida, has lauded the Independent Corrupt Practices and Other Related Offences Commission (ICPC) for its proactive approach to the fight against corruption.

The Speaker who was represented by the Hon. Member representing Gwadabawa South State Constituency, Alhaji Bello Idris, made the commendation at the Town Hall Meeting on My Constituency, My Project! organized by ICPC in collaboration with National Orientation Agency (NOA) and Actionaid, in Sokoto, recently.

Hon. Achida noted that apart from the prosecution of corrupt offenders with its attendant delay, ICPC has evolved other proactive measures to prevent corruption from occurring among which was the town hall meeting aimed at enlightening the people on the ills of corruption and why they must avoid it.

He pointed out that because most of the electorate does not have the faintest idea of what constitutes a constituency project, their elected representatives take advantage of their ignorance into hoodwinking them to believe that they (representatives) are donating projects to them.

He added that some representatives have even gone a step further by keeping such constituency projects till electioneering years before donating them to the electorate in order to secure their votes.

The Speaker therefore expressed optimism that with such sensitization by ICPC the people would be more informed into taking the ownership of and protecting government projects within their localities.

According to the Chairman, “This exercise, popularly known as CPTG, was a huge success with the communities in the states, on account of the fact that

a lot of abandoned projects were completed or are now being completed because of the intervention by ICPC. The Commission recovered money for government from those who did not execute the projects, underperformed or inflated cost of the projects.“

He explained that “We are gathered here today to talk about how you, the community people, can be involved in the process of selecting, implementing and monitoring these projects for the purpose of transparency and accountability.”

Prof. Owasanoye reiterated the fact that constituency projects were funded by government with public money and not gifts or donations to communities by their political representatives.

The ICPC boss therefore charged the people to show more interest in the selection and execution of the projects as well as to take ownership of them for their sustainability.

In his remark during the meeting, the Director-General (DG) NOA, Dr. Garba Abari, also lent credence to the need for communities to take ownership of the constituency projects. The NOA DG spoke through the Director of Sokoto State Office, Abubakar Mode.

“It is our view that when communities take ownership of these projects, there will be genuine interest to preserve and protect them. It will also ensure that contractors ever eager to maximize profits, execute the projects to the highest standards required. Community ownership will ensure that legislators and other officials of government are alerted when there is poor execution of these contracts and that they also are held accountable,” the NOA boss expressed.

Also speaking at the event, the Chairman, Sokoto State Chapter of the Association of Local Government Chairmen of Nigeria (ALGON) Alhaji Aminu Ibrahim, described the meeting as an opportunity to reevaluate themselves and interface with the electorate in order to chart the way forward.

The ALGON chairman promised to mobilize all local government chairmen in Sokoto State to replicate the town hall meeting in their various localities.

Other speakers who contributed to the discussion spoke with one accord, calling on the Commission to step down the meeting to the grassroots.