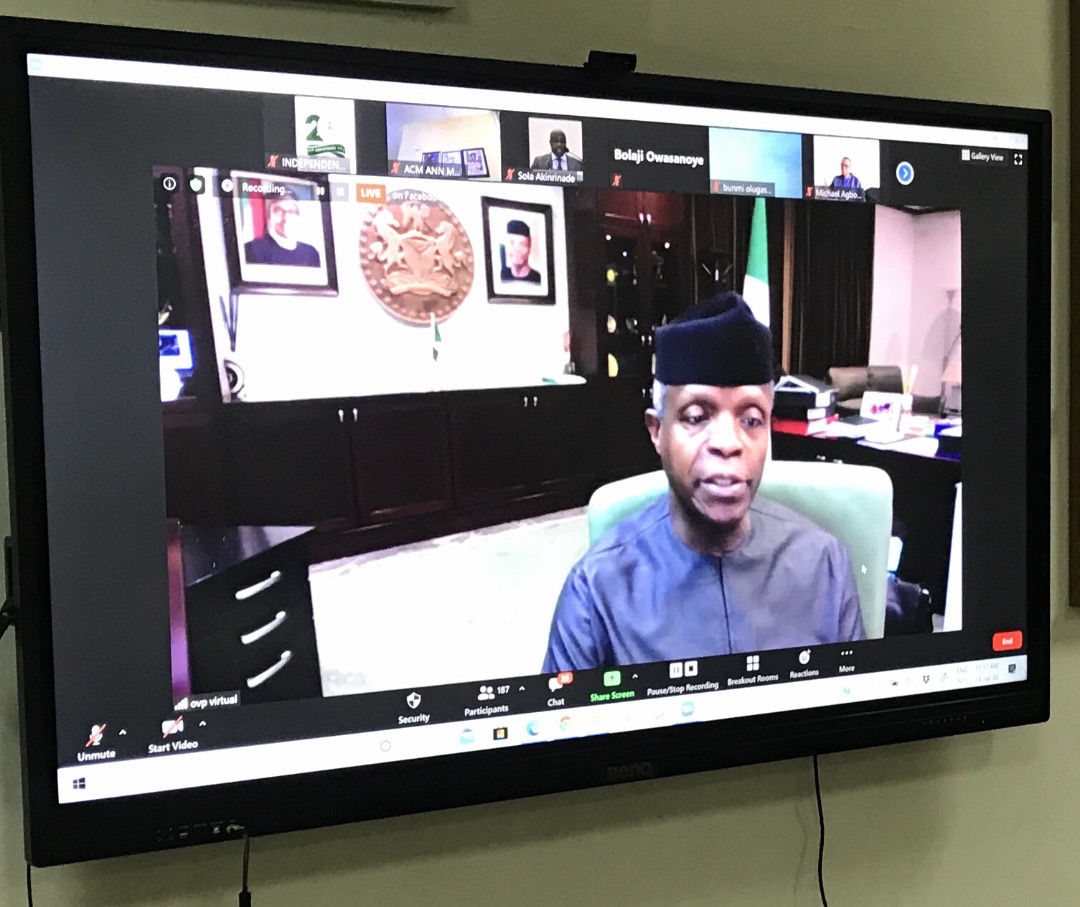 Prof. Osinbajo made this remark recently at the opening ceremony of the African Regional Webinar titled, “Combating Corruption and Illicit Financial Flows: New Measures and Strategies”, organized by the Independent Corrupt Practices and Other Related Offences Commission (ICPC) as part of activities marking its 20th anniversary.

According to him, “Over the years, massive public resources and assets have been directly stolen; diverted; deliberately misapplied to gratify corrupt tendencies; stashed in foreign jurisdictions or mired in and susceptible to pilferage by the inequitable and unjust international economic system that continues to undermine the social and economic development aspirations of poor countries especially from Africa, hence Goal 16 of the SDGs is devoted to corruption, specifically commits that: ‘by 2030, significantly reduce illicit  flows and arms flows, strengthen the recovery, return of stolen assets and combat all forms of organized crimes”.

The Vice President noted that the three-fold mandate of ICPC; enforcement of laws against corruption; prevention of acts of corruption; public education and enlightenment against corruption remains relevant today as it was 20 years ago, stating that the government had supported the fulfillment of this statutory mandate by demonstrating the political will that has afforded all anti-corruption agencies the latitude to do their work without interference.

On his own part, the Secretary to the Government  of the Federation, Mr. Boss Mustapha  expressed his delight with the several initiatives the Commission put in place to combat corruption such as: Constituency and Executive Projects Tracking; Revenue and expenditure tracking in collaboration with agencies like Office of the Auditor-General for the Federation and the Federal Inland Revenue Service; Leveraging technology in the systems study and review of personnel and capital vote of MDAs; Ethics compliance survey of MDAs.

According to him, ICPC efforts have yielded dividends within a short time, emphasizing that the Webinar offered another opportunity for participants to reflect, recommend new measures and strategies that could be used to combat corruption and stem IFFs from the continent.

Earlier in his welcome address, ICPC Chairman, Professor Bolaji Owasanoye, said that the Commission within its three-fold mandate had in the past 20 years received 19,831 petitions, successfully investigated about 5,000 of the petitions and prosecuted almost 1,000; securing about 20% convictions of the cases.

Professor Owasanoye also stated that the Commission conducted 47 System Study Reviews on public sector MDAs and 5 CRAs in different key sectors of the economy including transport, education, health and the e-government system.

The Chairman added “The Commission made input in the introduction and design of the BVN by Office of the Accountant-General of the Federation and Bankers Committee, IPPIS and GIFMIS to mention a few achievements.”

He further noted that in their approach to enlist public support and encourage citizens to own the fight against corruption, the Commission had always engaged the media and civil society in its Constituency and Executive Projects Tracking Initiative, on drafting National ethics and integrity policy, tracking of conditional cash transfer and social feeding programs, reducing retail corruption on the roads by regular joint enforcement actions with the FRSC and other security agencies.

He added: “In the area of infrastructure, we have in the past 16 months up-scaled the forensic capacities of the Commission with modern soft and hard ware including hand writing, polygraph, biometric and access control facilities. We have certified at least five world-class forensic experts and are training more. In 2019, we commenced an Electronic Document Management System (EDMS) to digitize the operational components of the Commission’s work and its legacy documents from inception. These measures have suddenly become ideal and imperative for coping with the effects of COVID-19 on governance and operations.”

In his goodwill message, the Deputy Chairperson, African Union Commission, Thomas Kwesi-Qartey, commended Nigerians and Nigerian government for their tireless efforts towards improving financial flows and  ethics, not just in Nigeria, but for the African continent as a whole, which is evident in the adoption of the Common African Position in Asset Recovery commonly known as CAPAR, during the 33rd Ordinary Session of Assembly of Heads of States and Governments of African Union held February 2020 in Addis Ababa, Ethiopia.

“The CAPAR will be extremely useful in helping African countries to identify, to repatriate and to effectively manage the illicitly acquired assets in a manner that respects our sovereignty as we work to stem IFFs from the continent,” he said.

The United Nations Resident Coordinator, Mr. Edward Kallon in his address acknowledged efforts of Nigerian government in corruption related convictions, especially in 2019 and repatriation of stolen funds from few jurisdictions, also expressed belief that there was need for an approach that puts citizens at the center of the fight against corruption.

“It is only when citizens see  tangible progress directly impacting their lives positively, that we can expect them to support the fight, to refuse to take part in corrupt practices and to report corruption incidents whenever they become aware of them. In short, we need to do better in demonstrating the actual benefits of the fight against corruption.”

The 2-day webinar had other participants such as the members of the National Assembly responsible for over-sighting the Commission, immediate past Chairman of ICPC, Board Members of ICPC, Chair of CCB, NFIU, and Development Partners amongst others in attendance.