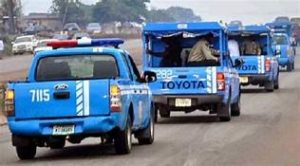 In its continuing effort to tackle both petty and grand corruption in Nigeria, the Independent Corrupt Practices and Other Related Offences Commission (ICPC) has once again led the arrest of 33 Federal Road Safety Corps officials and a fifth man who is a civilian for allegedly extorting money from motorists on highways across the country.

All in all, 33 FRSC officials and one civilian were arrested in the raids.

The operation also yielded the recovery of a total sum of Forty-Five Thousand, Eight Hundred and Seventy Naira from the suspects which are alleged proceeds of their extortionary activities.

While the suspects have been granted administrative bails and further investigation activities are still on-going to ensure that those culpable are appropriately punished, it is noteworthy that ICPC is determined to sustain the operation to rid Nigeria’s highways of officials who extort money from road-users.