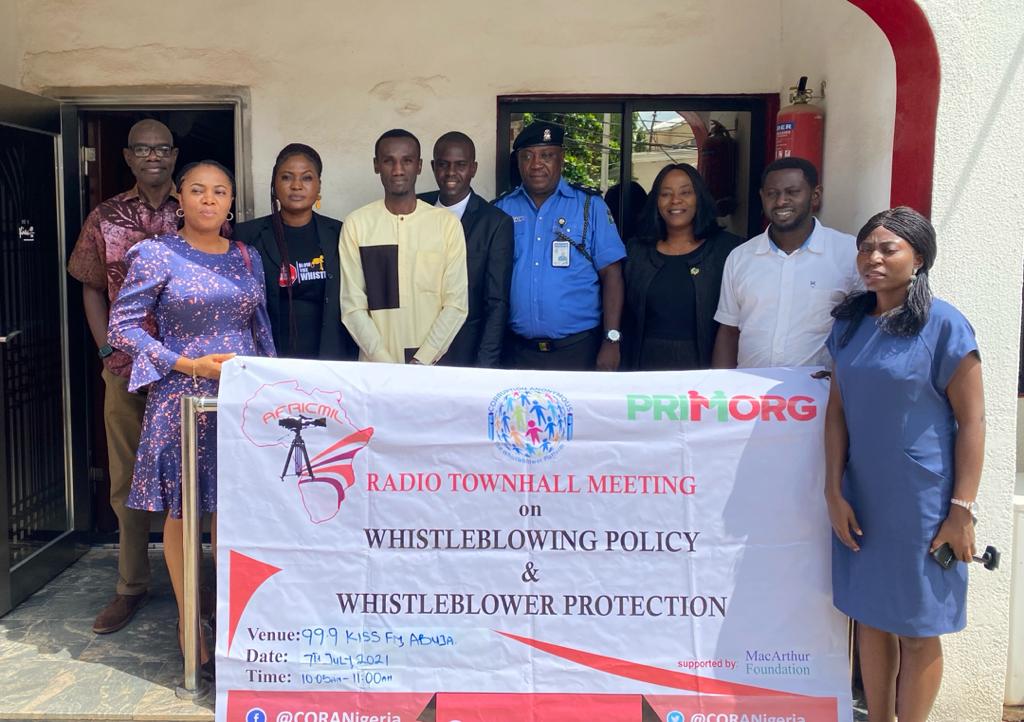 The statement came through the spokesperson to ICPC, Mrs. Azuka Ogugua, who represented the Chairman at a live radio programme at Kiss FM in Abuja, tagged “Town Hall Meeting on Whistleblowing and Whistle Blower Protection in Nigeria”.

Professor Owasanoye explained that the ICPC Act in Section 27 gives citizens the right to blow the whistle by reporting corruption to the Commission either orally or in writing.

The Chairman also revealed that ICPC has made available more avenues through which complaints and reports of corruption could be sent to the Commission by the public, advising those who could not go to any of the Commission’s offices to submit petitions or report corruption in person to do so electronically via ICPC’s email or website.

Other channels of reporting corruption or complaints according to the ICPC boss included ICPC’s social media platforms and the toll-free lines.

Professor Owasanoye added that the Commission also receives and acts on anonymous petitions.
Speaking further, the Chairman said that ICPC has inaugurated Anti-Corruption and Transparency Units (ACTUs) in Ministries, Departments and Agencies (MDAs) which serve as mini ICPCs. The ACTUs according to him, “can perform all the duties ICPC except prosecution. They can receive reports of corruption, investigate and recommend remedial actions.”

In order to make the units effective, the Chairman revealed that the Commission recently introduced the ACTU Effectiveness Index, noting that with the tool, ICPC will be able to know how effective they are in doing what they are supposed to be doing.

Irrespective of the provisions for incentive as captured in the whistle blower policy, the ICPC Chairman called on Nigerian to take advantage of the ICPC toll-free lines (0800-CALL-ICPC) to report acts of corruption, as patriotic Nigerians without expecting a reward.

The radio town hall is organized by African Centre for Media & Information Literacy (AFRICMIL) in collaboration with Progressive Impact Organization for Community Development (PRIMORG). Other guests at the meeting include a representative of the Police, CSP Femi Adedeji, and representatives of civil society organizations, CISLAC and CDD.