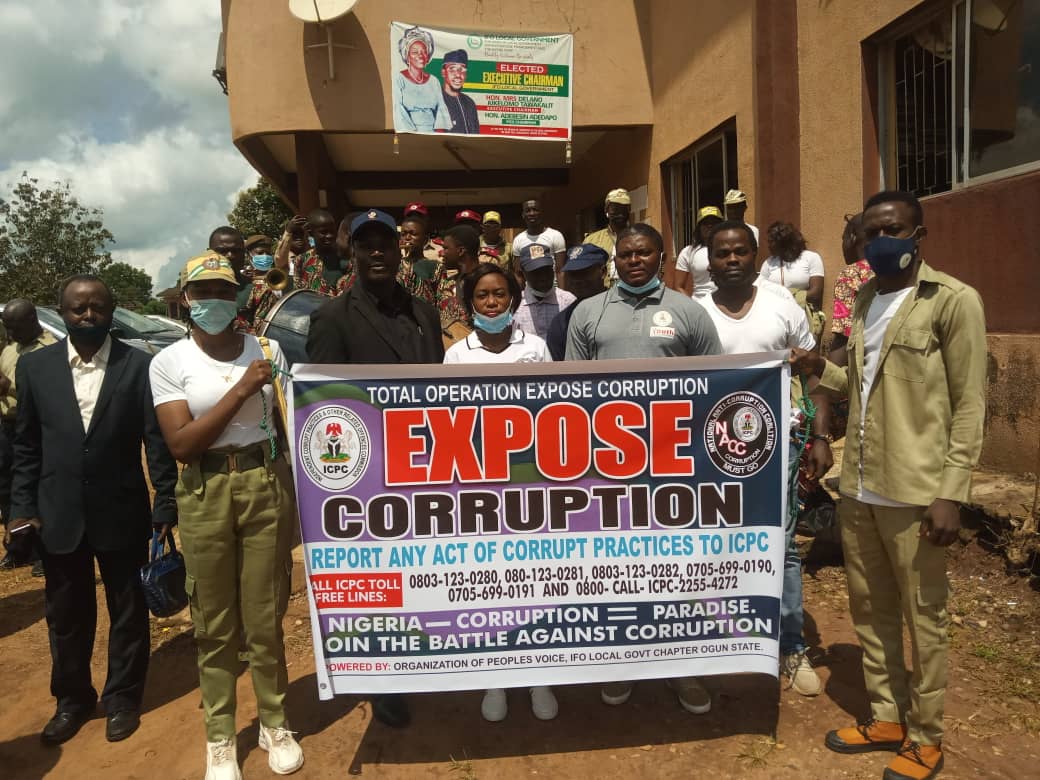 In its continued effort to generate awareness of the National Ethics and Integrity Policy (NEIP), the Independent Corrupt Practices and Other Related Offences Commission (ICPC) in collaboration with the Organisation of People’s Voice (OPV), have resolved to make known to the grassroots the evil of corrupt practices and further promote the NEIP through an awareness walk and town-hall meeting in Ifo Local Government of Ogun State.

Declaring the walk open, the ICPC Chairman Professor Bolaji Owasanoye, SAN, represented by Mrs. Mary Omonoyan of the ICPC Lagos State office, said that the NEIP should be the business of all Nigerians and emphasized the need to uphold the core values of the policy as it was developed because of the damaging effects of corruption in both public and private sectors, with a view to help restore and revitalise the sectors.
Furthermore, delivering a sensitization lecture titled, “Total Operation Expose Corruption”, the Chairman of the Commission stressed that the Policy would be taken to the nooks and crannies of Nigeria through networking with non-governmental actors.

In his remarks, Mr. Idris Abu, Executive Director of OPV, called on all stakeholders to rise to expectations so as to bring the nation to its ethical standards through grassroots’ mobilisation.

Participants on the walk which comprised National Youth Service Corps (NYSC) members, members of the NGO and some ICPC staff, moved from the Secretariat of Ifo Local Government Council to the Palace of Olu of Ifoland, His Royal Majesty, Oba Samuel Oladipupo.

Speaking during the meeting, the Local Government Council’s Vice Chairman, Mr. Dapo Adebesin enjoined all officials of Council to imbibe integrity in the course of doing government business.

On behalf of the traditional rulers, his Royal majesty, Oba Olujide Olubamiwo Akinyemi stated that the insatiable desire for wealth, and societal pressures have caused many to engage in corrupt practices; adding that “Government needs to play their part by building public confidence and providing basic infrastructure.”