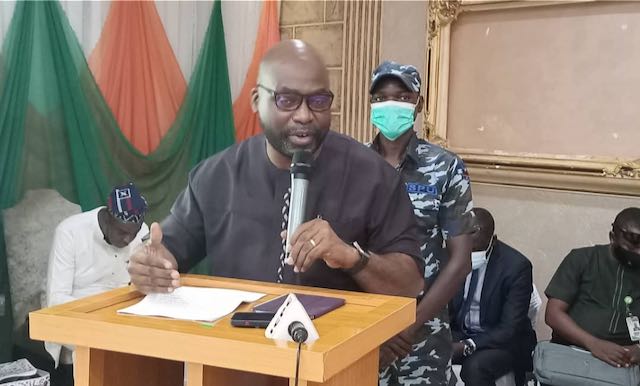 Irrespective of Your Political Affiliations, You are Now Public Officers and the Laws Apply – ICPC to Incoming Mandate Secretaries and Other Political Appointees of the FCTA

The Chairman of the Independent Corrupt Practices and Other Related Offences Commission, (ICPC), Professor Bolaji Owasanoye, SAN, has charged the incoming mandate secretaries and other political appointees of the Federal Capital Territory Administration (FCTA) to focus on their new offices rather than their political ties.

He gave the charge at an induction programme and retreat themed ‘Capacity Building for Accountable Leadership’ held in Abuja recently for incoming mandate secretaries of FCT.

Prof. Owasanoye in his paper titled, “Ethics and Code of Conduct and Laws to Stay out of Trouble…”, told the inductees that by taking the oath of office a responsibility to obey rules and extant regulations had been placed on them therefore to stay out of trouble they needed to avoid the illusion that they were there to please those who honoured them with the appointment.

The ICPC Chairman told participants that the paper was part of ICPC’s normative behavioural change initiative aimed at enlightening them on the slippery areas to avoid in carrying out their assignment to the nation.

He took the participants through 11 basic codes – conflict of interest; restriction on multiple public purse payment (as stipulated in the 1999 Constitution, as amended, and other extant regulations); prohibition of public officers operating a foreign account; prohibitions on gifts and benefits in cash or kind; bribery; abuse of power etc.

Other areas the ICPC boss told them to watch out for were engaging in commercialised farming and converting government property into personal use, which he said included using government money to fund private events like paying staff Duty Tour Allowance (DTA) in order for them to attend the wedding of one’s child amongst others.

In his words, “The interest and conduct of public officers is constitutionally regulated as well as governed by legislative guidelines including the 1999 Constitution, as amended, Code of Conduct and Tribunal Act, ICPC Act and so on.”

Prof. Owasanoye also advised them to avoid the use of their position to abuse their subordinates including sexual harassment, adding that ICPC looks into such cases and have secured convictions on them.

He went on, “The use of siren, police to intimidate citizens is abuse and therefore culpable and punishable. Mind you, the public is watching”.

In conclusion, Prof. Owasanoye advised, “To stay out of trouble, be careful with procurement; contract splitting; fiscal governance; abuse of power and most importantly do not disconnect from reality”.