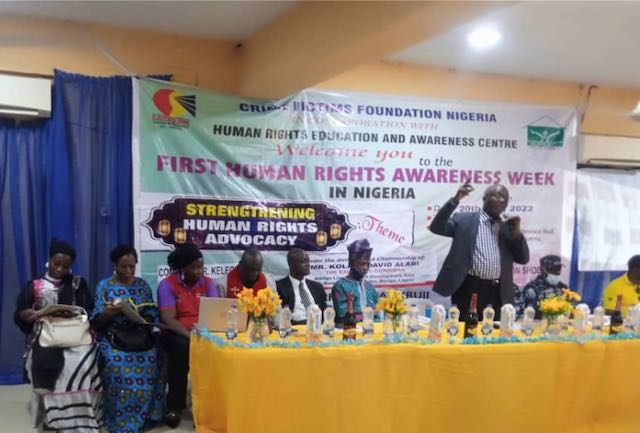 ICPC Charges CSOs to bring about Change in Nigeria

The Independent Corrupt Practices and Other Related Offences Commission (ICPC) has urged Civil Society Organizations  to participate actively in bringing about change in Nigeria.

Mrs. Mary Omonayan, an Assistant Chief Superintendent at the Lagos State Office of the Commission gave the charge during an event organised by Crime Victim Foundation Nigeria in Collaboration with the Human Rights Education and Awareness Centre held recently.

Mrs. Omonoyan, who represented the Resident Anti-Corruption Commissioner (RACC), Mr. Kabir Elelu, during her presentation titled, “Fighting Corruption through Advocacy – The ICPC Experience”, stressed the need for concerted efforts and mobilisation of broad-based interest groups to effectively fight the monster at all levels.

She said that the civil societies and Nigerians must cultivate the courage to be positively different and speak up against corruption.

Mrs. Omonayan said the citizens involvement would provide everyone an opportunity to influence public decisions because the worst impact of corruption in Nigeria is the destruction of personal and national integrity.

The RACC representative lamented that communal values had been bastardised, honesty had become rare and that values of hard work and excellence has been sacrificed on the altar of greed.

She stressed the need for building of alliances by identifying allies in the community and joining hands with other stakeholders to do what was necessary to revive our societal values and led  moral regeneration.

Earlier at the event, the Executive Director of CRIVIFON, Mrs. Gloria Egbuji, who was represented by the Public Relations Officer, Frank Oshanugor, in her welcome address disclosed that CRIVIFON is an NGO that assists crime victims and works with relevant government agencies in the fight against crime. He said they also promote the rights of victim of crime and make justice accessible to the victims.

She said the organisation was the first to introduce Domestic Violence and Gender Desk at Police Stations and collaborate with schools to stop bullying.