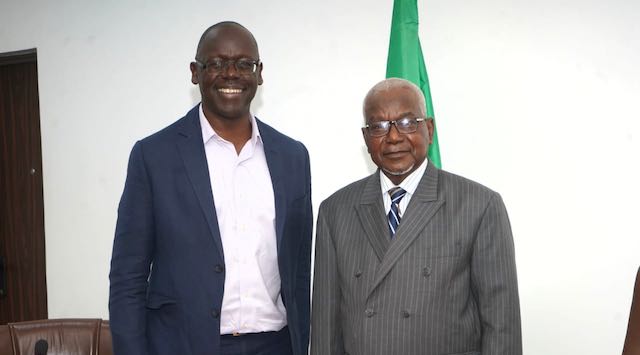 The Independent Corrupt Practices and Other Related Offences Commission (ICPC) has said that the Commission will partner with the Open Government Partnership (OGP) to develop the 3rd National Action Plan (NAP III).

Speaking during a courtesy call by OGP, the ICPC Chairman, Professor Bolaji Owasanoye (SAN), commended the team for recognising the work of the Commission and for their support to the country. He further assured the team that the Commission will support the development of the 3rd National Action Plan.

Prof. Owasanoye, who was represented by a Board Member, Hon. Justice Adamu Bello said, “I am delighted that OGP rated Nigeria high especially in areas of budget processes and anti-corruption. As an anti-corruption agency, we assure you that ICPC is doing everything possible within its mandate to see that corruption is brought down to the barest minimum”.

The OGP Co-Chair, Mr Aidan Eyakuze, commended ICPC for her doggedness and commitment in the fight against corruption. He said that the OGP team was very proud of the agency for checking corruption and ensuring various measures are put in place to ensure a transparent government.

“ICPC is seen as the eyes and ears of the Nigerians in promoting and protecting the use of public resources for the benefit of all Nigerians. Your struggle is real and deep. It can be difficult, but you are making some good progress. The OGP pledges to be your partner and support.”

He noted that Nigeria joined the partnership in 2016 and is developing her third National Action Plan which seeks to consolidate the progress made in the first and second NAPs. They constitute a critical step by government to tackle corruption and money laundering in the system and also enhance corporate accountability and transparency.

The Co-chair recognized and commended the work of the Nigerian government, ICPC and civil societies for opening up to the public in the previous National Action Plans, noting the commitment and innovation to fight corruption.

He went further to encourage the identification of beneficial owners of corporate entities which will discourage corruption and enable government to trace and curb illicit financial flows, and revealed their commitment to enhance compliance with the Freedom of Information Act (FOIA) mandatory publication requirements by public institutions as that would improve government responsiveness to the effective implementation of the FOI Act.