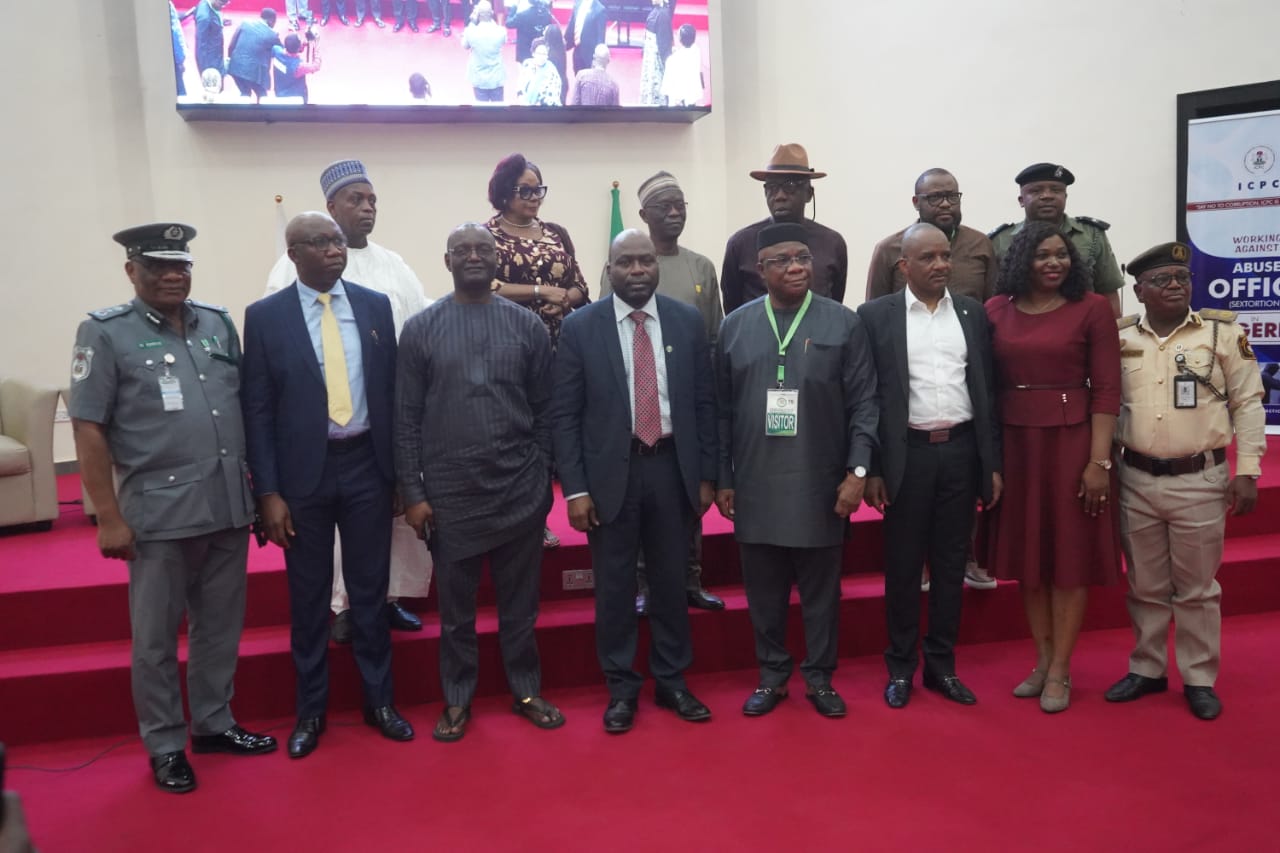 Critical stakeholders in the Ports Sector have pledged their support for the implementation of an Anti-Corruption Policy to curb corruption and improve the ease of doing business in the sector.
This pledge was made during a meeting of CEOs of port agencies held at the Independent Corrupt Practices and Other Related Offences Commission (ICPC) headquarters in Abuja recently.
Speaking at the interactive session, which aimed at improving service delivery in the sector, ICPC Chairman, Professor Bolaji Owasanoye, SAN, OFR stated that the maritime sector was a critical part of the economy, but due to corruption, it was not delivering the values in its potential, causing Nigeria to lose business to neighboring countries, as well as revenue.
ICPC Chairman also noted that the newly developed policy for the sector was an important mechanism for improving their operations as well as the compliance function of all agencies operating within the sector.
On the role of ICPC, Professor Owasanoye said “Section 6 of the Corrupt Practices and Other Related Offences Act, 2000, empowers the Commission to take measures to prevent corruption by looking at systems and blocking corruption prone areas.”
He declared that the aim of Corruption Risk Assessment (CRA) conducted in the ports was to sanitise the system and infuse ethical practices in the conduct of their operations and defuse the negative perception about the country, and added that the intervention was successful because of the zero-tolerance for corruption of the government and collaboration of relevant agencies involved. As a follow-up to that, a Ports Standing Task Team (PSTT) was set up.
“The Policy, which was developed through the support of the Convention on Business Integrity (CBI), focuses on ethical codes within the sector, prescribes punishment for unethical behaviour as well as defines consequences for infractions within the industry”, he emphasised.

He stressed the significance of preventing a problem rather than resolving it by saying, “Prevention is better than cure,” as arresting and prosecuting offenders only would not completely solve the problem.

Owasanoye added that the Commission would not back down on its demand to ensure that the proper processes and procedures be followed, and he urged all parties to work together to support the sector’s anti-corruption goal.

In his remarks, the Executive Secretary of the Nigerian Shippers Council (NSC), Mr. Emmanuel Jime, said the meeting’s goals were to foster mutual understanding, trust, and enable the building of potent alliances in the pursuit of enhancing national capability.

On some of the successes recorded by the task team, Jime revealed that the team had fostered the reduction in delays and operational cost of doing business at the ports and saved government about N5.4bn from illegal demands, demurrage; declaration of “Operation Free Ports Corridor” in Tincan and Apapa ports to ease traffic along those routes, amongst others.

On the implementation of the Nigerian Port Process Manual (NPPM) by Port agencies, Jime said it was an effort to stress the importance of compliance and request for the buy-in and full cooperation of all relevant agencies in the sector.

Referring to government’s Executive Order E01 of 2017, which sought to promote ease of doing business, he said the NPPM represents the port sector’s adaptive response to the actualisation of the federal government’s objectives as envisaged in the Order.

According to him, “The manual was desperately needed to institute a new culture of compliance and transparency that will fast-track the re-tooling of the maritime sector. It does not seek to eliminate the powers of existing SOPs of statutory agencies at the ports, but serves as a harmonisation of the different SOPs into a single document that allows effective coordination and efficiency.”

Also speaking at the event, the Director-General of the Nigerian Maritime Administration and Safety Agency (NIMASA), Bashir Yusuf Jamoh congratulated ICPC and other important players for their efforts to rid the ports sector of corruption and corrupt practices through the CRA carried out.

He continued by saying that actions taken by NIMASA, such as the implementation of automated systems, synergised data with pertinent agencies, and partnerships with stakeholders have also contributed in sanitizing the industry.

Speaking about the highlights of NPPM, Head, Technical Unit on Governance and Anti-Corruption Reforms (TUGAR), Mrs. Jane Adidu-Onwumere stated that the Policy, which started in 2011, harmonised existing anti-corruption policies of all the agencies in the ports with the aim of establishing a culture of integrity, compliance for users of ports services.

She continued, “The policy is aimed to encourage the highest levels of professionalism in the sector since it would be a powerful instrument for preventing corruption, thereby promoting an environment favorable for ease of doing business and direct foreign investment”.

The Head of CBI, Mr. Soji Apampa, in his remarks suggested that a compliance monitor be put in place in order ensure that officers and users of the ports abide by the policy and the laid down rules and regulations.

“The likelihood of corruption rises in the absence of incentives and penalties for performance’ he said as he encouraged CEOs to utilise incentives.

Delivering a paper on “The Need for Compliance in Port Process”, ICPC Osun State Resident Anti-Corruption Commissioner ICPC, Mr. Demola Bakare, fsi, emphasised the necessity of compliance by designated officials while outlining the goals and specifications of the compliance function.

He called for sustainable funding of the remaining aspects of the CRA report and the PSTT activities across the Ports; establishment of the compliance function in each of the port agencies, specifically assigned to designated officers etc.

Representatives of Nigeria Immigration Service, Nigeria Customs Service, Nigerian Police, Nigerian Agricultural Quarantine Service and the Department of State Security expressed the readiness of their agencies to support the sanitisation of the Sector in order to ensure transparency and accountability and to promote effectiveness and efficiency in the port process.