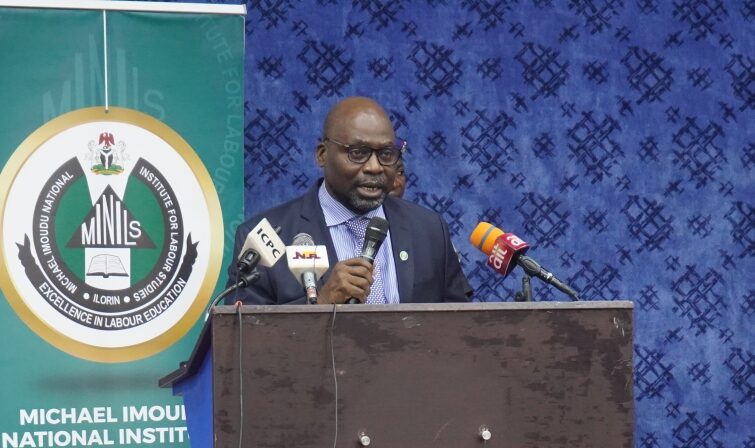 The Chairman of the Independent Corrupt Practices and Other Related Offences Commission ICPC, Prof. Bolaji Owasanoye, SAN, OFR, has called on the Federal Government to re-balance the workforce in order to realize a compensation system that is fair and aligns with productivity.

He made the call at the opening ceremony of a 2-day National Policy Forum on Compensation Management in Nigeria under the auspices of the Michael Imoudu National Institute for Labour Studies (MINILS) in collaboration with the National Salaries, Incomes and Wages Commission (NSIWC) and the Friedrich Ebert Stiftung Foundation (FES) held in Abuja recently.

Prof. Owasanoye said there was need for fair compensation, collective bargaining while canvassing for productivity as “what has not been produced cannot be shared.”

He noted regrettably that the workforce especially the public sector was misaligned, and groaning under the scourge of fake employment, ghost workers and wrong skill mix.

According to him, “A number of anti-corruption initiatives have overtime pruned down the number of ghost workers, but the malady of fake employment is work in progress with ICPC, the Head of the Civil Service and the Federal Civil Service Commission working together to tackle this malady.”

The ICPC boss suggested re-distribution or re-alignment of public sector skills to meet the needs of government and achieve higher productivity in the sector. He equally raised the issue of some critical sectors of government been under-resourced in human capital while others have redundant surplus thereby necessitating the right skill mix to be adopted urgently.

“We need to resolve this kind of anomaly with this conversation, while we discuss compensation management, we must be honest to discuss the things that will facilitate and enable fair compensation,” he concluded.

Earlier in his welcome address, Chairman of NSIWC, Mr. Ekpo Nta, said that the forum was born out of an urgent need to put to rest the re-occurring crisis with compensation in Nigeria.

Mr. Nta, who is the immediate past Chairman of ICPC, commended the current leadership of ICPC for the many recoveries it had made especially in personnel cost of government while encouraging participants to speak freely as their opinions and suggestions will count at the end of the day.

“We have gone past the blame game, let us salvage our compensation policy as it is biting all over,” he said.

In his own remarks, the Director-General of MINILS, Comrage Isa Aremu, mni, stated that the turn-out at the event confirms the validity of the saying that “the sum is greater than some of us”.

Comrade Aremu said the programme was timely coming at the break of a new political dispensation as “every political democracy required an economic democracy to succeed.”

He commended the Federal government for not retrenching workers despite economic crunch, high inflation, shortfall in revenue generation and other hardships brought about by the COVID 19 pandemic.